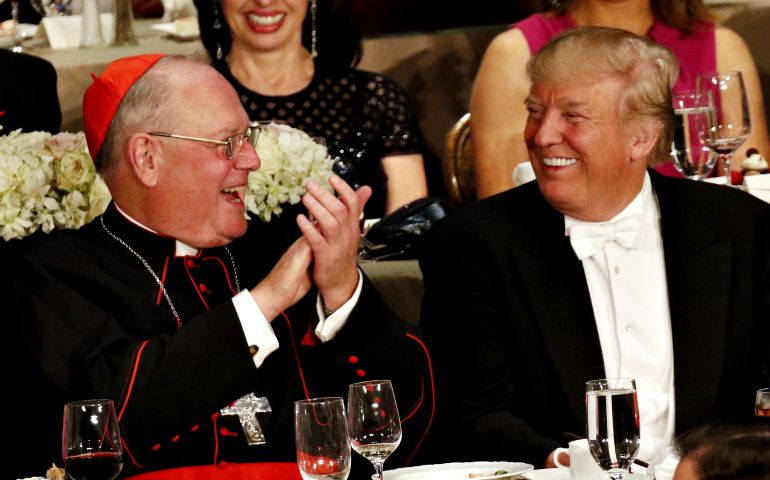 John Gehring, the Catholic Program Director for Faith in Public Life, thinks so.

Here is a taste of his piece at the New York Daily News:

Cardinal Timothy Dolan of New York and other prominent Catholic bishops should ask themselves whether their moral clarity is compromised after a recorded phone call between President Trump and members of the hierarchy surfaced earlier this week.

During the call, which took place on Saturday and was first reported by the Catholic news outlet Crux, Trump declares that he is “best [president] in the history of the Catholic Church,” and describes himself as the most committed anti-abortion president in history. While the call covered a range of issues, including support for Catholic schools, the president’s efforts to end abortion and his reelection prospects became a focal point.

“I hope that everyone gets out and votes and does what they have to do,” the president implored some 600 Catholic educators and a number of leading bishops who dialed in to the call, including Dolan, Boston Cardinal Sean O’Malley and Los Angeles Archbishop José Gómez, who is the president of the U.S. Conference of Catholic Bishops. Trump warned that if he is defeated in November, “You’re going to have a very different Catholic Church.”

None of the Catholic leaders challenged the president’s cruelty toward immigrants, denial of climate change, cuts to food assistance or his pattern of racist demagoguery. This was a missed opportunity to speak truth to power.

Catholic teaching can’t be reduced to a single issue. Pope Francis is unequivocal that the “lives of the poor, those already born, the destitute” are as “equally sacred,” in his words, as the unborn in the womb.

At times, the call exuded the bonhomie of an old boys club. The president praised Cardinal Dolan as a “great friend,” adding that he always respects what the cardinal “asks for.” Dolan responded that “the feelings are mutual sir,” joking that the two speak so frequently that his elderly mother complains “I call you more than I call her.”

And the court evangelicals garnered a reference in Gehring’s piece:

To be clear, Catholic bishops have at times issued strong statements challenging the Trump administration’s actions impacting immigrants and have objected to how the administration’s tax policies favor the wealthy. Compared to the circle of evangelical flatterers Trump surrounds himself with to convey religious support, Catholic leaders are far more critical of the president than white evangelicals. But if bishops in particular want to avoid becoming the Catholic version of what the religious historian John Fea calls “court evangelicals,” they can start by recognizing the dangers that come with cozying up to a president who consistently makes a mockery of Christian values.