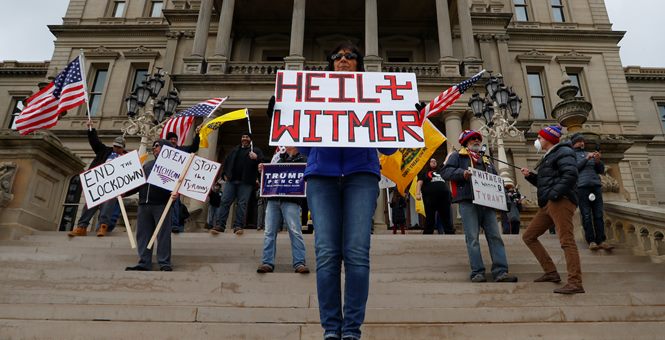 Annie Thorn is a sophomore history major from Kalamazoo, Michigan and our intern here at The Way of Improvement Leads Home.  As part of her internship she is writing a weekly column titled “Out of the Zoo.” It focuses on life as a history major at a small liberal arts college. In this dispatch, Annie writes about the coronavirus protests in her home state. –JF

A woman donning blue jeans, a puffy jacket and sunglasses stood proudly on the steps of the Michigan State Capitol last Wednesday. In gloved hands she held a poster painted with the phrase “HEIL WITMER” in red and black letters. A crimson swastika took a prominent place on the upper right-hand corner of the sign. Another poster, this time taped to the back of someone’s black pick-up truck, also bore Nazi imagery. This one had a photo-shopped image of Governor Gretchen Whitmer, toothbrush mustache and all, in a Hitler salute with a Nazi flag flying behind her shoulder. In bold white letters the bottom of the sign read, “AMERICAN FLAGS ARE NOT ESSENTIAL ITEMS.”

Frustrated with new stay-at-home restrictions, the individuals who crafted these signs were some of a few thousand Michiganders who traveled to Lansing last week for “Operation Gridlock.” In a lot of ways, I can empathize with their frustration. I like having the freedom to go where I please, when I please, for whatever reason I wish. I don’t like being stuck at home, unable to go to school or church or my favorite restaurant. There is nothing wrong with protesting (safely), voicing your opinions, and holding leaders accountable for their actions; in fact, I have been to a few protests myself in the past. There is nothing wrong with being frustrated, or wanting to go back to work. But equating Gretchen Whitmer and her stay-at-home order with Adolf Hitler and the Third Reich takes things much too far. They are not the same.

I’m no expert on Nazi Germany, but I know enough from my “History of Modern Europe” class that our current suffering in no way compares to that of Jews living under the Third Reich. When Hitler ruled Germany, Jews lost their citizenship under the Nuremberg laws. They lived in ghettos and starved to death in the streets. Millions more were sent to Auschwitz, Belzec, Chelmno, Majdanek, and several other concentration camps where they were immediately gassed or forced into hard labor. Under Hitler’s discretion, the Third Reich exterminated over six million Jews and hundreds of thousands of other individuals in an attempt to establish the Aryan race. Gretchen Whitmer is not Adolf Hitler. Some may not like her or agree with her, but to equate her to a fascist is inaccurate and callous.

At the same time, though, I am well aware that President Trump has also been caricatured as a Nazi time after time. Before his inauguration back in 2017 and during his impeachment this past year, scores of signs, social media posts, and opinion pieces compared Trump to Adolf Hitler. And yet, since the election of President Trump in 2016, most Americans have not had to re-live the Holocaust. Some may not like him or agree with him, but to equate President Trump to a fascist is also inaccurate and callous.

As a student of history, I can’t help seeing the present through the lens of the past. We historians do not typically wear rose-colored glasses, but we do carry flashlights. We seek to illuminate, to expose, and to make known. As we step into the shoes of those who lived in the past, we try our noble best to shed light on the path we walk in the present. It is our job, and it is our duty. And I will complete it with honor in the years to come.