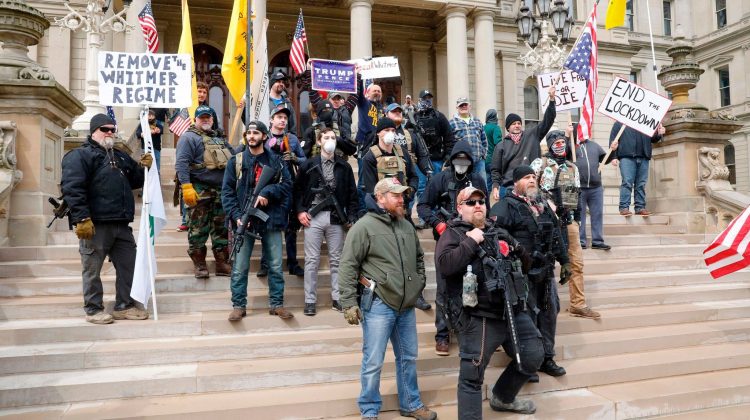 Above is a picture of some of the men protesting at the Michigan state Capitol in Lansing.  Yes, you do see machine guns.

Michigan mayor Gretchen Whitmer will not open the state to business yet and continues to stand behind her stay-at-home order in the midst of the protesters call to “lock her up.” Whitmer is trying to save lives. But some people in Michigan believe that their rights are more important. They seem to be defending their “right” to die from the coronavirus.

I am guessing many of these protesters would say that they are Christians. But Christian faith teaches that we must submit our own interests–as a mark of our kindness and love of neighbor–with the needs and suffering of others. Jesus is our model here.

As I have written before, there is also a secular political tradition–it is called civic humanism–which calls the citizens of a republic to occasionally sacrifice self-interest for the public good. The founding fathers of the United States, many of whom wrote the Constitution and the Bill of Rights, called this “virtue.”

It does not look like the protesting crowds are very large. Most residents of Michigan appear to be obeying Whitmer’s order. But what if such protests degenerate into a riot? What if these men with guns stormed the Capitol building or tried to depose the governor by force? It would seem at a moment like this, Whitmer (or any governor for that matter) might need military help from the federal government to protect her. Would she get such help from a U.S. president who is encouraging the protesters?:

Trump is not just encouraging protests in Michigan. In Virginia, he is connecting his call to protest with guns:

LIBERATE VIRGINIA, and save your great 2nd Amendment. It is under siege!

And let’s not forget the political angle here. Whitmer is a Democrat. Michigan is a battleground state that Trump desperately needs to win in November.

There is also an anti-intellectual/anti-science dimension to these protests. Andrew Sullivan’s captures this well in a tweet covering protests in Texas:

The Jonestown phase for the Trump cult. https://t.co/l4hMu7Gzcm

Yes, you heard them correctly. They are chanting “Fire Fauci”–a reference to Dr. Anthony Fauci, the director of the National Institute of Allergy and Infectious Diseases and the lead scientist on the White House coronavirus task force.

Whitmer deserves our support and prayers right now. So do all of the governors–Democrat and Republican– trying to lead their states in this time of crisis. Most of them are trying to save lives.

As for the protesters, they also need our prayers.  Father forgive them.

And where are all of Trump’s evangelical supporters? Trump has announced he will be watching the church service tomorrow at Rev. Jack Graham‘s Prestonwood Baptist Church in Dallas:

Will be online tomorrow morning at 10:30am (Eastern) watching @jackngraham from @Prestonwood Baptist in Dallas, Texas. You can join us at https://t.co/Nx4ePPySmn. https://t.co/mheZBjYHrx

I am not a fan of politics in the pulpit. But sometimes the church must speak out–either directly or indirectly–against a President who is fomenting armed rebellion. (These court evangelicals seem to love Romans 13. Does it apply to governors as well?). Jack Graham has the ear and eyes of the president tomorrow morning. How will he respond?

ADDENDUM (Sunday, April 19, 2020 at 1:15pm):  Apparently some folks are upset because I have said that these men are carrying machine guns.  I apologize for the confusion.  They look like machine guns to me, but I don’t know anything about guns.  But those who are criticizing me for getting the model of gun wrong are missing the point.