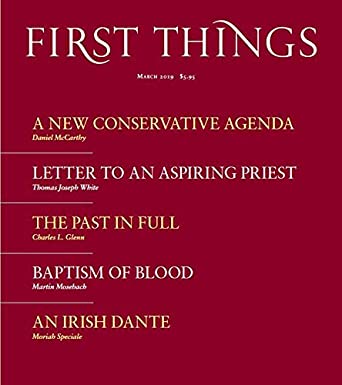 I stopped subscribing to First Things magazine several years ago. I still check the website every now and then, but I am never surprised by what I find there. The magazine is no longer the intellectual feast that it was in the Father Neuhaus era.

Perhaps this is why Jason Vickers‘s recent piece at Providence, a conservative Christian magazine devoted to foreign affairs, resonated with me. Here is a taste:

I first encountered FT when I went to work for William J. “Billy” Abraham in the late 1990s. As the assistant to the Outler Chair in theology at Southern Methodist University, one of my daily jobs was to retrieve Billy’s mail. Once a month, I found myself reading the latest issue of FT on my way back from the mailroom. Often, I would read it cover to cover before handing it over. Here was a journal that modeled the intellectual virtues that Billy so frequently talked about: fairness in argument, careful consideration of evidence, avoiding logical fallacies, patience in exercising judgment, open-mindedness, humility, and empathy.

The content being published under the banner of FT today exhibits almost none of these qualities. Gone are the ecumenical tone and irenic spirit. Gone, too, is the commitment to intellectual virtue. In place of the things for which Father Neuhaus and FTwere once standard bearers, one now finds essays clearly calculated to polarize and offend (if they are not so calculated, then their authors are unrivaled in their lack of self-awareness). FT now exhibits open hostility toward other Christians and the wider population. It is no longer winsome and inviting. It is no longer evangelical. Rather, the mindset of many of its authors, most notably its senior editor, R.R. Reno, strikes me as that of an angry and bitter remnant. They write as though they are the last Christians in America.

Consider the views that Reno and others have expressed in the pages of FTover the last couple of weeks. In a series of essays that are intellectually vicious in their criticism of the response to the global pandemic (especially the response of Christians), the authors divide the world into two groups of people. On the one hand are those who worship God, care deeply about virtue, and know that death doesn’t have the final say. Such people are the true Christians, and they are a picture of calm during the present so-called “crisis.” Because of the steadfastness of their convictions, they don’t lose their wits. They are faithful. They don’t overreact. (It is surely no accident that Reno’s daily “Coronavirus Diary” amounts to a self-portrait in knowing calmness—he walks his dog, stops by an empty cathedral to pray, goes to his office, and returns home.)

On the other hand, the rest of us are hunkered down in our homes, terrified of death and dying because we are materialists who no longer believe in God or in life after death. We would do anything to prolong mere “physical life,” because that is all we have left. We are materialists, atheists, idolaters, or worst of all, dishonest Christians (“Christian leaders,” says Reno, “secretly accept the materialist assumptions of our age”). We are even told that we don’t “petition God” anymore, choosing instead to place all our hope in science and technology. Nor do we care whether the scientists to whom we turn for hope are themselves virtuous people. We’re too lathered up in a panic to be worried about such high and lofty things. The same goes for our blind and irrational trust in the government. Unlike true Christians, we are so afraid of death and dying that we can’t even bring ourselves to speak death’s name. We prefer to speak of “saving lives” rather than “delaying death.”

The intellectual viciousness of these and other essays is truly stunning.