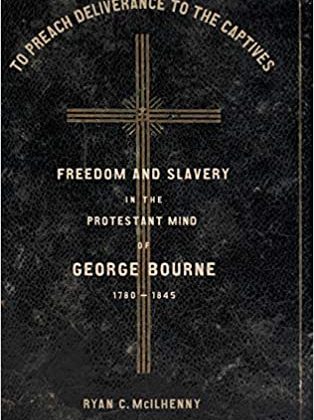 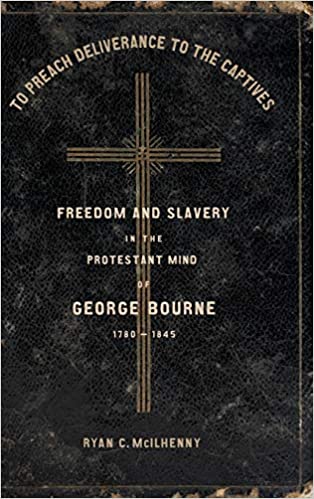 Ryan C. McIlhenny is an independent scholar living and working in Shanghai, China. This interview is based on his new book, To Preach Deliverance to the Captives: Freedom and Slavery in the Protestant Mind of George Bourne, 1780–1845 (LSU Press, 2020).

JF: What led you to write To Preach Deliverance?

RM: To Preach Deliverance is a substantial revision of my dissertation from the University of California, Irvine. I have had quite a diverse journeyman experience since completing my PhD in 2008, making it difficult for me to devote my time to the manuscript. A few years ago, however, I was offered an exciting opportunity to work in Shanghai, which has provided the much-needed time for research and writing. Within a couple months of relocating to the Middle Kingdom, historian James Brewer Stewart, a leading historian of abolition, author of Holy Warriors, and founder of Historians Against Slavery, sent me an encouraging email about a review I did of a new anthology on Wendell Phillips for the Journal of the Early Republic. Knowing that Jim, a Phillips scholar, was editor emeritus of LSU’s reputable “Antislavery, Abolition, and Atlantic World” series, I asked if he would be willing to get his thoughts on my work. He enthusiastically agreed and read it. This has led to a very fruitful correspondence over the last couple years. Jim’s very constructive suggestions encouraged me to rewrite the introduction and conclusion and include a whole new chapter (Chapter 1). Jim remained supportive throughout, as did historians Richard Blackett, Edward Rugemer, and Mark Noll.

JF: In two sentences, what is the argument of To Preach Deliverance?

RM: To Preach Deliverance is an intellectual biography, written in the mode of cultural history, of George Bourne (1780-1845), the pioneer of immediate anti-slavery as well as the pioneer of the anti-Catholic escaped-nun genre in American literature. Bourne’s radicalism, his uncompromising opposition to slavery, shaped by a conservative Protestant outlook that became increasingly hostile to Catholicism, allowed him to formulate a unique concept of liberty that rested not on evangelical revivalism, which had a profound impact on reformist movements, but upon historic-confessional Protestantism.

JF: Why do we need to read To Preach Deliverance?

RM: There are only two biographies on Bourne. One written by his son Theodore in the late 1880s and another by John Christie and Dwight Dumond in the late 1960s. These biographies, however, focus on Bourne’s antislavery activities, ignoring for the most part his anti-Catholic sentiments. Contemporary historians have, for the most part, dismissed anti-Catholicism as either irrational or symptomatic of some kind of paranoid style in American life. I find such explanations unconvincing. My work attempts to make sense of what may seem to be in the contemporary mind two conflicting issues: a battle against human chattel bondage with an equally virulent battle against Catholicism.

Bourne was a highly influential polymathic figure engaged in a variety of nineteenth-century American issues: slavery, race, and citizenship; the role of women in abolition; Christianity and republicanism; the importance of the Bible; and the place of the church in civil society. To Preach Deliverance provides a small window into the complexities of revolutionary liberalism, the place of the Bible in antislavery, and the centrality of religious tolerance to a free society. It peels back yet another layer of the complexities of religious reform in nineteenth-century America.

Another important goal of the book—as it is for most historical monographs—is to show the relevance of the past on the present. In one important sense, history has more to do with the present than the past. In the case of To Preach Deliverance, I want readers to consider the continued legacy (or perhaps the “unfinished” realities) not only of slavery, its existence in new forms, but also religious intolerance, especially anti-Catholicism, in American culture.

RM: I wish I could tell you that I had always aspired to become a professional historian. I’ve always been interested in a number of disciplines—the arts, theology, political science, history, and philosophy. I had an opportunity to choose graduate studies in at least three of these areas. I eventually chose a program that allowed me to combine most of my interests. Graduate school added to my interdisciplinarity in that I came to appreciate the material dialectics and cultural texts that produce both ideas and identity. Despite my success during those formative years in grad school, it wasn’t until my mid-30s, a few years after completing my PhD, that I finally understood what it meant to be a historian. And notwithstanding the challenges that many of us face in securing a tenure-track position, given the market’s (and neoliberal administrators’) aversion to all things humanities, I don’t regret becoming a historian, a cultural historian at that. Given the cultural/linguistic turn in scholarship that often conflates artifice with artifact, fact and fiction, the historian, I believe, is needed to sift through these distinctions today more than ever.

RM: I’m not sure how long I’ll be here in China; indeed, I look forward to securing a position at a college or university in the states. But, for now, life in Shanghai has afforded me the time to maintain a healthy schedule for writing. I’m working on a more focused study of Spiritualism in the antebellum period and another on some of the forgotten features of American pragmatism at the turn of the twentieth century, employing a similar methodology used in To Preach Deliverance. I’m also working on two larger works—one related to religious intolerance in American history, the other on the dialogue between religion and radicalism.