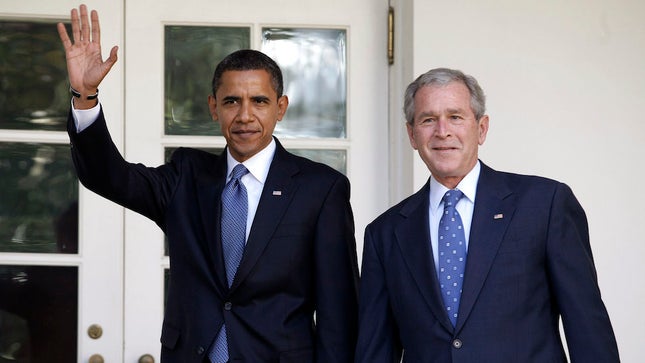 Here is a taste of her letter to Bush and Obama.  It is published at the conservative website, The Bulwark:

The moment you have sought to avoid for nearly four years is here. We are witnessing one of the worst crises to ever confront the United States and one of the worst government failures in the history of the country you served and love.

Together, you have a collective 16 years as president, during which you dealt with a number of crises: the September 11 attacks, two wars, the collapse of the financial system, and the Ebola and H1N1 outbreaks. Faced with these events, you marshaled the vast forces of our government, trusted our best experts, told hard truths, led capable teams on complex missions to tackle these emergencies, and called upon our citizens to unite in patriotic spirit to ride out the storm together. Neither of you were perfect presidents—you both would be the first to admit that—and you each have your detractors.

But both of you knew what the job of the president is in times of crisis and how to manage the basic blocking and tackling of government responses.

President Donald Trump has now proven what many of us long suspected: He has not done any of this, because he cannot do it. He lacks the most basic capabilities required of a president in this moment.

And you can help.

This is the time for you to join forces and publicly demand that the government create a plan to manage the COVID-19 outbreak.

The United States is now a worldwide epicenter for the virus. We have outpaced the rest of the world even though we had a long lead time to prepare for it and were one of the last large countries to be struck by it.

But the scariest part is that we are leading the world in total number of cases and the wave has still not crested here: The pace of infections is still accelerating.

These are not political talking points. They are facts. Because COVID-19 doesn’t care where you live in or what party you vote for. In a pandemic, there are no red or blue states—only infected states.

These facts have developed for one reason and one reason only: They are the catastrophic consequences of President Trump’s leadership. He denied the threat the virus posed for weeks. He ignored months—years—worth of warnings and calls to action to move faster on testing capacity and to stockpile essential medical supplies.

And even now, with the evidence of his failure everywhere around us, President Trump continues to push for an arbitrary, dangerous end to the suppression measures which have been enacted by state and local authorities.

You both know that Trump’s response has failed and that continued failure could result in damage which will extend not for years, but decades, to come.

So it is time for you to step forward publicly, rally Americans of both parties to heed the recommendations of public health officials, and demand that the current executive leadership do better.

I know you are both loathe to do this and believe that former presidents should not criticize sitting presidents. Under nearly every other circumstance, that impulse is a wise one. But in this particular situation there is an ongoing disaster where a course-change by the current leadership could effect a material change in America’s outcome. And the only two men in America with enough moral and political leverage to make a difference are the two of you.

Please do not wait another day.