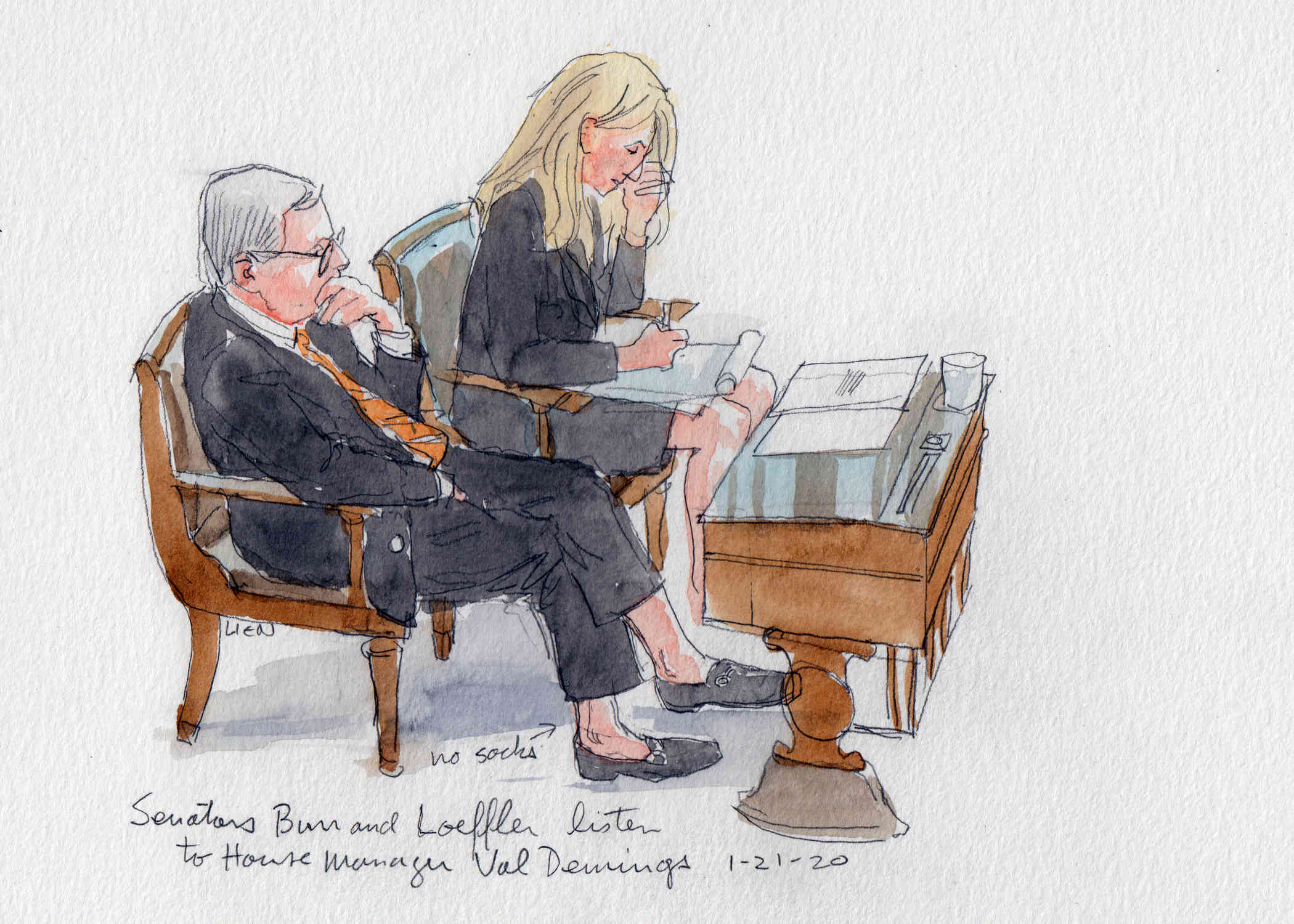 Senator Richard Burr of North Carolina and Senator Kelly Loeffler of Georgia sat next to each other during the Donald Trump Senate impeachment trial. Burr is currently using this sketch as his Twitter profile picture.

We now know that both Burr, who serves as the Chairman of the Senate Intelligence Committee, and Loeffler, whose husband is the chairman of the New York Stock Exchange, sold millions of dollars in stocks before the economic downturn precipitated by the coronavirus pandemic.

Here is a taste of Robert Faturechi’s and Derek Willis’s reporting at ProPublica:

Soon after he offered public assurances that the government was ready to battle the coronavirus, the powerful chairman of the Senate Intelligence Committee, Richard Burr, sold off a significant percentage of his stocks, unloading between $628,000 and $1.72 million of his holdings on Feb. 13 in 33 separate transactions.

As the head of the intelligence committee, Burr, a North Carolina Republican, has access to the government’s most highly classified information about threats to America’s security. His committee was receiving daily coronavirus briefings around this time, according to a Reuters story.

A week after Burr’s sales, the stock market began a sharp decline and has lost about 30% since.

On Thursday, Burr came under fire after NPR obtained a secret recording from Feb. 27, in which the lawmaker gave a VIP group at an exclusive social club a much more dire preview of the economic impact of the coronavirus than what he had told the public.

Here is Lachlan Markay, William Brederman, and Sam Brodey of The Daily Beast:

The Senate’s newest member sold off seven figures worth of stock holdings in the days and weeks after a private, all-senators meeting on the novel coronavirus that subsequently hammered U.S. equities.

Sen. Kelly Loeffler (R-GA) reported the first sale of stock jointly owned by her and her husband on Jan. 24, the very day that her committee, the Senate Health Committee, hosted a private, all-senators briefing from administration officials, including the CDC director and Anthony Fauci, the head of the National Institutes of Health of the United States, on the coronavirus.

“Appreciate today’s briefing from the President’s top health officials on the novel coronavirus outbreak,” she tweeted about the briefing at the time.

That first transaction was a sale of stock in the company Resideo Technologies worth between $50,001 and $100,000. The company’s stock price has fallen by more than half since then, and the Dow Jones Industrial Average overall has shed approximately 10,000 points, dropping about a third of its value.

It was the first of 29 stock transactions that Loeffler and her husband made through mid-February, all but two of which were sales. One of Loeffler’s two purchases was stock worth between $100,000 and $250,000 in Citrix, a technology company that offers teleworking software and which has seen a small bump in its stock price since Loeffler bought in as a result of coronavirus-induced market turmoil.

Loeffler’s office did not immediately respond to a request for comment on the transactions and whether they were prompted or informed by information shared at that late January briefing. It’s illegal for members of Congress to trade on non-public information gleaned through their official duties.

In the weeks after her spate of stock trades, Loeffler sought to downplay the public health and financial threats posed by the coronavirus.

“Democrats have dangerously and intentionally misled the American people on #Coronavirus readiness,” she tweeted on February 28. “Here’s the truth: @realDonaldTrump & his administration are doing a great job working to keep Americans healthy & safe.”

Both of these Senators knew things about the coronavirus that the general public did not.  They did not tell us. And they profited (or at least avoided an economic hit) based on what they knew.

At a time when we need to sacrifice self-interest for the common good, these two Senators seem to be taking care of themselves first.

Here is the author (Hamilton or Madison) of Federalist 62:

The qualifications proposed for senators, as distinguished from those of representatives, consist in a more advanced age and a longer period of citizenship. A senator must be thirty years of age at least; as a representative must be twenty-five. And the former must have been a citizen nine years; as seven years are required for the latter. The propriety of these distinctions is explained by the nature of the senatorial trust, which, requiring greater extent of information and stability of character, requires at the same time that the senator should have reached a period of life most likely to supply these advantages…

Here is John Jay in Federalist 64:

As the select assemblies for choosing the President, as well as the State legislatures who appoint the senators, will in general be composed of the most enlightened and respectable citizens, there is reason to presume that their attention and their votes will be directed to those men only who have become the most distinguished by their abilities and virtue, and in whom the people perceive just grounds for confidence. The Constitution manifests very particular attention to this object. By excluding men under thirty-five from the first office, and those under thirty from the second, it confines the electors to men of whom the people have had time to form a judgment, and with respect to whom they will not be liable to be deceived by those brilliant appearances of genius and patriotism, which, like transient meteors, sometimes mislead as well as dazzle. If the observation be well founded, that wise kings will always be served by able ministers, it is fair to argue, that as an assembly of select electors possess, in a greater degree than kings, the means of extensive and accurate information relative to men and characters, so will their appointments bear at least equal marks of discretion and discernment. The inference which naturally results from these considerations is this, that the President and senators so chosen will always be of the number of those who best understand our national interests, whether considered in relation to the several States or to foreign nations, who are best able to promote those interests, and whose reputation for integrity inspires and merits confidence. With such men the power of making treaties may be safely lodged.

And Madison in Federalist #10:

The two great points of difference between a democracy and a republic are: first, the delegation of the government, in the latter, to a small number of citizens elected by the rest; secondly, the greater number of citizens, and greater sphere of country, over which the latter may be extended.

The effect of the first difference is, on the one hand, to refine and enlarge the public views, by passing them through the medium of a chosen body of citizens, whose wisdom may best discern the true interest of their country, and whose patriotism and love of justice will be least likely to sacrifice it to temporary or partial considerations.

ADDENDUM (Friday, March 21, 2020 at 2:08pm): Since I wrote this post, we have also learned that Dianne Feinstein (D-CA) and James Inhofe (R-Okla) have also dumped stock.