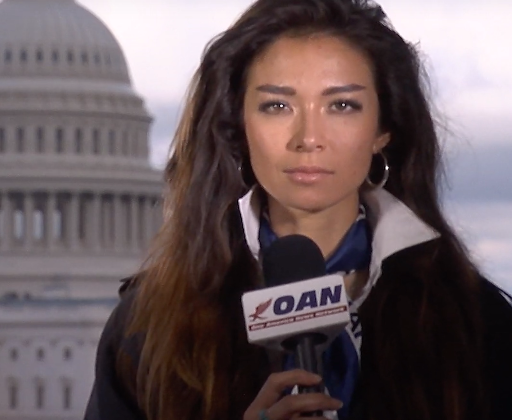 In case you missed it, Philip Bump of The Washington Post has it covered.  Here is a taste of his recent piece:

One of the reporters he likes, Chanel Rion of the sharply pro-Trump cable network One America News, asked a question a bit later. (“OAN. Very good,” Trump said when she began speaking. “Thank you very much. You treat me very nicely.”)

Rion, who partnered on several obsequious reports about Ukraine with Trump personal lawyer Rudolph W. Giuliani, first asked Trump whether he thought the expression “Chinese food” was racist. It was an obvious effort to bolster Trump’s recent focus on linking China to the virus and condemnation of his referring to it as a “Chinese virus.” Trump, predictably, did not think the term was racist.

“Major left-wing news media, even in this room, have teamed up with Chinese Communist Party narratives and they’re claiming you’re a racist for making these claims about Chinese virus,” she said. “Is it alarming that major media players, just to oppose you, are consistently siding with foreign-state propaganda, Islamic radicals, and Latin gangs and cartels — and they work right here at the White House with direct access to you and your team?”

This question, regurgitating common rhetoric from conservative social media and repackaging it in a truly bizarre way, was odd enough that even Trump mostly ignored it. (How does one “team up” with a “narrative”?) He did use it, though, to tee off on media coverage that annoyed him.

“Because you see, I know the truth,” he continued. “And people out there in the world, they really don’t know the truth. They don’t know what it is. They use different slogans and different concepts for me almost every week trying to catch something. Last week, it was, oh, chaos. You see me, there’s no chaos. No chaos. I’m the one telling everybody to be calm. There’s no chaos at the White House. We have unbelievable professionals. It’s really — I mean, I think I came up with the term, I hope I came up with the term, but it is fake news. It’s more than fake news, it’s corrupt news.”

He complained generally about not being called by news outlets writing stories, focusing on one Wall Street Journal article in particular (which may have been the spur for the day’s frustration with the media overall). By way of full disclosure, he went on to say that The Post had been “going wild lately” and that the newspaper is very dishonest.

“This administration has done a great job, but the press is very dishonest,” he concluded.

The bizarre theories of one attendee got the most attention, but Trump’s briefing on Thursday was noteworthy for his repeated and aggressive hostility to the media that’s pointed out the holes in the coronavirus response. https://t.co/sWKFn9PMtT