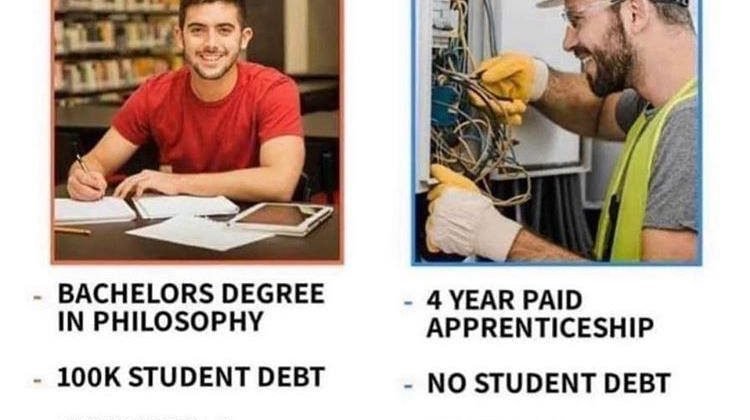 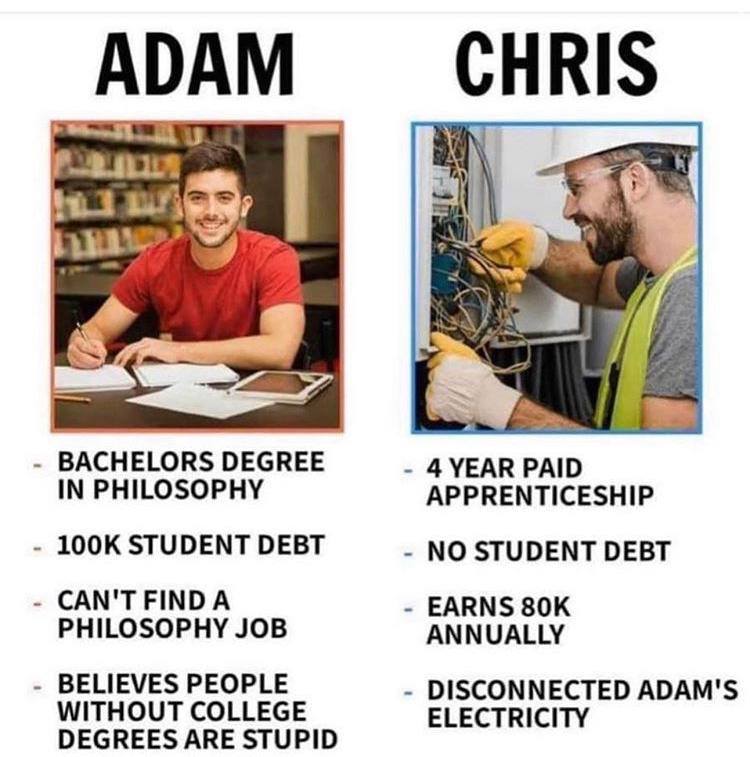 Jonathan Couser, a history professor at Plymouth State University in Plymouth, New Hampshire, has some good thoughts about this meme.  Here is what he recently wrote on his Facebook page (used with permission):

Bash the meme time, children. This was recently shared by a friend who, appropriately, took it down. But it’s the kind of thing that circulates a lot so I’m going to share it myself – with some analysis.

At first glance, the meme appears to be pointing out the value of trade jobs, which provide solid employment with little or no college debt. That’s true enough, and valid. These careers are good options that young people should consider.

But that’s not all it’s doing.

It’s misleading on a number of points. While “Adam’s” $100K in college debt is not unheard of, it’s nowhere near typical. Actual average college debt is around $30K. Meanwhile, “Chris'” income figure is inflated – it’s possible to make $80K a year as an electrician, but the average figure is around half that, maybe three-quarters, depending on where you live.

The meme says that “Adam” can’t find “a philosophy job,” which is no-brainer because, outside of academia, where you’d need a PhD rather than a BA, there’s no such thing as “a philosophy job.” That makes a cheap shot easy for the meme-creator, but disingenuously hides the realities.

Philosophy majors (and majors in other supposedly “worthless” degrees like History or English) actually do very well on the job market. The major is not designed as job training. Instead, they go into all kinds of careers where skills in writing, communicating, or analytical thinking are beneficial. They are also much better prepared than most to go on to graduate programs like an MBA or JD and become lawyers or business executives.

In fact, according to Five-Thirty-Eight in 2015, the average income of a philosophy major was – guess what? – $80K – the amount that was the inflated claim for “Chris'” income.

After being dishonest, the meme gets ugly.

This is the rhetoric of grievance. It vilifies the educated people of the world, the philosophers, as a bunch of snobs who carry an unjustified contempt for working people. And it relishes the sense of vengeance, of getting even, that “we” (since we’re clearly supposed to be cheering for “Chris” by the time we read this far down the meme) are going to stick it to “them.” There’s no sense of empathy for “Adam” losing his electricity or blame that “Chris” does this to him. We’re supposed to think it’s just deserts.

To be sure, there are some educated snobs in the world. But I spend my life in academia, and I can honestly say that I can’t think of any of my colleagues, nor students, ever expressing contempt for working people. It’s a myth.

What’s really going on here is not a positive promotion of the value of a good trade career. What’s really going on is a toxic attack on higher education. The meme is designed to promote a sense of grievance, of resentment, and of contempt for education and the educated. By encouraging the “Chris'” of the world to despise the foolish “Adams”, the meme tells people they don’t need to listen to reasoning, they don’t need to respect expertise, and thus makes them pliable to misinformation, fake news and propaganda.

I agree with every word of Couser’s analysis.