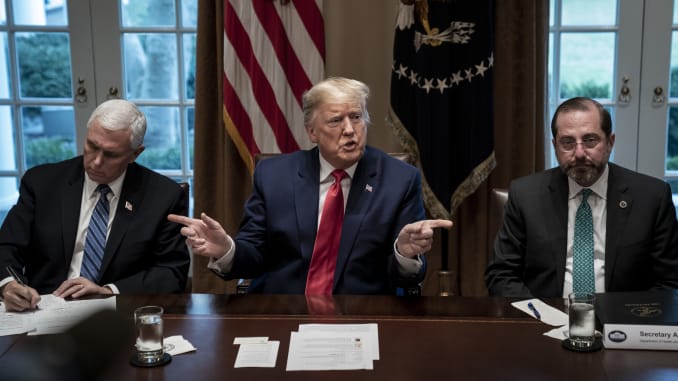 Leadership during a pandemic requires character.  It requires honesty and humility. A president should speak the truth to the American people, regardless of how it will affect him politically.  A president must rid himself of his narcissism, swallow his pride, and listen to the scientists and disease-control experts. Trump has done neither of these things. He seems more concerned about his image, his political brand, the 2020 election, and the stock market.

Here is David Remnick at The New Yorker:

The first official act of the Trump Administration was the Inauguration—and, within hours, a lie delivered from the White House press room about how this had been “the largest audience to ever witness an Inauguration, period, both in person and around the globe.” That episode seems so long ago, and many thousands of lies ago. But as the world now faces a pandemic, it has never been more essential to recall that norm-setting performance and to admit what has been demonstrated on a daily basis about the public official who carries ultimate responsibility for the public safety of American citizens: Donald Trump is incapable of truth, heedless of science, and hostage to the demands of his insatiable ego.

Recall, since the start of the coronavirus crisis, the litany of bogus assurances, “hunches,” misinformation, magical thinking, drive-by political shootings, and self-stroking:

“We have it under control. It’s going to be just fine.”

“By April, you know, in theory, when it gets a little warmer, it miraculously goes away.”

“The Obama Administration made a decision on testing that turned out to be detrimental to what we’re doing . . . ”

“We’re going very substantially down, not up. . . . We have it so well under control. I mean, we really have done a very good job.”

“As of right now and yesterday, anybody that needs a test [can have one], that’s the thing, and the tests are all perfect, like the letter was perfect—the transcription was perfect.”