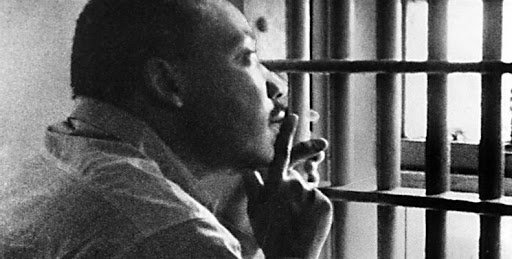 After a couple weeks focusing on “creation” in my Created Called for Community (CCC) course at Messiah College, we have shifted gears slightly to focus on the meaning of “community.” Our first reading on this front was Martin Luther King Jr.’s “Letter from a Birmingham Jail (1963). We read it alongside “A Call for Unity,” the white Birmingham clergy’s statement criticizing King’s visit to the city. King’s wrote his “Letter” as a response to “A Call for Unity.”

There are lot of ways to teach “Letter from a Birmingham Jail.” In a history course, I would use this text to teach something about the civil rights movement of the 1950s and 1960s. While the past always teaches us something about the present, my primary goal in any history course is to provide students with a thorough knowledge of the past so that their engagement with the present might be richer and more informed.

CCC is not a history course. Since we read and discussed “Letter from a Birmingham Jail” as part of a unit about “community” in America and the larger world, my pedagogical assignment was to help students see what King might teach us about the meaning of this elusive idea.

But I remain a historian at heart. How could we approach such an important text without some historical context?  As part of the work of sourcing this document, I showed the class a short video from Voice of America:

We began our conversation with “A Call for Unity.” I asked students to read the affixed signatures to the document and tell me something about the men who affirmed it. Eight Birmingham clergy signed it–two Episcopalians, one Baptist, one Roman Catholic, one Jewish rabbi, two Methodists, and one Presbyterian. They were all white.

For our purposes, I asked the students to imagine a different title to this document. What if we changed the name to “A Call for Community?” What kind of community were the white spiritual leaders of Birmingham defending?  Students noted several characteristics of this community:

I thought it was important to pause at this point and remind students that Birmingham, Alabama in 1963 was a community. When many of them hear the word “community” they think of something positive. Community is a warm and fuzzy feeling about togetherness and mutual care. Many students who enroll at Messiah College say they are attracted to the “sense of community” they feel when they visit campus.  This is all well and good. But yesterday I wanted them to see community in a neutral way. My students did not approve of the kind of community the Birmingham clergy defended in “A Call for Unity,” but it was a community nonetheless.

A few of them had a hard time attaching the word “community” to a segregated city like Birmingham. As Christians, many were bothered by the fact that the religious and spiritual leaders of this city defended such a community. Two students, in post-class conversations, made connections to the anemic state of the Christian church in 1963 and what they perceived to be the weakness of the white churches today in the midst of suffering, oppression, racism, the environment, abortion, political power, etc.

It was now time to turn to King. Why was King in Birmingham? Nearly all the students who spoke noted that the city’s African-American community invited him to come. Not everyone living in Birmingham was happy about the kind of community the white leaders were advancing in the city.  If Birmingham’s African Americans wanted to end Jim Crow, they would need some help. They turned to King.

Why else was King in Birmingham? King came to this southern city “because injustice is here.” We talked about his comparison to the Apostle Paul, a spiritual leader who left Tarsus and brought the Gospel to the Greco-Roman world. Paul was also an “outside agitator.” He challenged local gods and disrupted the peace in places like Rome, Corinth, Ephesus, Phillipi, Athens, and Thessalonica.  Since some of my students are familiar with the Acts of the Apostles, I thought this might be a good place to linger for a while.

But I also wanted to get to the fourth paragraph of King’s letter.  He writes:

Moreover, I am cognizant of the interrelatedness of all communities and states.  I cannot sit idly by in Atlanta and not be concerned about what happens in Birmingham.  Injustice anywhere is a threat to justice everywhere.  We are caught in an inescapable network of mutuality, tied in a single garment of destiny.  Whatever effects one directly, affects all indirectly.  Never again can we afford to live with the narrow, provincial “outside agitator” idea.  Anyone who lives inside the United States can never be considered an outsider anywhere within its bounds.

My students were quick to note that the Birmingham clergy’s vision was local, but King’s vision was national.  We paused and reflected on words and phrases like “interrelatedness,” “network of mutuality,” “single garment,” “narrow,” and “provincial.” I thought this exercise was important for our understanding of “community.” When King says “injustice anywhere is a threat to justice everywhere” it should cause us to think about local community with a little more complexity.

This was a lot to ponder, and time was running out. I said that I wish I could do an entire first-year seminar on King’s “Letter from a Birmingham Jail” because it was such an intellectual and moral feast. I only saw one student roll her/his eyes. 🙂

I continued to push the theme of community. Where do we look if we want to find the things that a given community values? One of the ways we do this is by examining a community’s understanding of right and wrong as embodied in its laws. King had a lot to say about this in the letter. How should we distinguish between “just” and “unjust” laws? Here is King:

One has not only a legal but a moral responsibility to obey just laws.  Conversely, one has a moral responsibility to disobey unjust laws.  I would agree with St. Augustine that “an unjust law is no law at all.”  Now, what is the difference between the two? How does one determine whether a law is just or unjust? A law is a man-made code that squares with the moral law or the law of God.  An unjust law is a code that is out of harmony with the moral law….Any law that uplifts human personality is just.  Any law that degrades human personality is unjust. All segregation statues are unjust because segregation distorts the soul and damages the personality.

We spent some time talking about what King meant by “personality.” With a little prompting, they began referencing Genesis 1 and 2 and Bruce Birch’s essay on the “ethic of being.” If we believe, with the Judeo-Christian tradition, that we are all created in the image of God, then the human person (“personality” in King’s language) is dignified.  A law is unjust when it strips people of human dignity.  Several students gravitated to King’s words about Hitler: “We should never forget that everything Adolph Hitler did in Germany was ‘legal’ and everything the Hungarian freedom fighters did in Hungary was ‘illegal.'” King added: “Now is the time to make real the promise of democracy and transform our pending national elegy into a creative psalm of brotherhood.  Now is the time to lift our national policy from the quicksand of racial injustice to the solid rock of human dignity.” Powerful stuff.

With only a few minutes left in class, I pointed them to King’s understanding of American nationalism.  National communities make appeals to history. King invoked the ideals of the founding, including Jefferson’s Declaration of Independence. If I had more time, I would have steered students toward something I wrote back in 2011:

When we think of the defenders of a Christian America today, the Christian Right immediately comes to mind. We think of people like Glenn Beck (who despite his Mormonism has joined forces with many Christian nationalists), David Barton, Peter Marshall and David Manuel, or Newt Gingrich. All of these public figures have championed the idea that the United States was founded as a Christian nation. Their careers have been defined by the belief that this country needs to return to its Christian roots in order to receive the blessings of God.

Rarely, if ever, do we hear the name Martin Luther King, Jr., included in this list of apologists for Christian America. Yet he was just as much of an advocate for a “Christian America” as any who affiliate with the Christian Right today. Let me explain.

King’s fight for a Christian America was not over amending the Constitution to make it more Christian or promoting crusades to insert “under God” in the Pledge of Allegiance (June 14, 1954). It was instead a battle against injustice and an attempt to forge a national community defined by Christian ideals of equality and respect for human dignity.

Most historians now agree that the Civil Rights movement was driven by the Christian faith of its proponents. As David Chappell argued in his landmark book, Stone of Hope: Prophetic Religion and the Death of Jim Crow, the story of the Civil Rights movement is less about the triumph of progressive and liberal ideals and more about the revival of an Old Testament prophetic tradition that led African-Americans to hold their nation accountable for the decidedly unchristian behavior it showed many of its citizens.

There was no more powerful leader for this kind of Christian America than King, and no greater statement of his vision for America than his famous “Letter from a Birmingham Jail….”

In the end, Birmingham’s destiny was connected to the destiny of the entire nation—a nation that possessed what King called a “sacred heritage,” influenced by the “eternal will of God.” By fighting against segregation, King reminded the Birmingham clergy that he was standing up for “what is best in the American dream and for the most sacred values in our Judeo-Christian heritage, thereby bringing our nation back to those great wells of democracy which were dug deep by the founding fathers in their formulation of the Constitution and the Declaration of Independence.” (italics mine)

It sounds to me that King wanted America to be a Christian nation. The Civil Rights movement, as he understood it, was in essence an attempt to construct a new kind of Christian nation—a beloved community of love, harmony, and equality.

Today we discuss Robert Putnam’s classic essay, “Bowling Alone: America’s Declining Social Capital.” I want to bring my 6th-grade bowling trophy to class, but I can’t seem to find it.