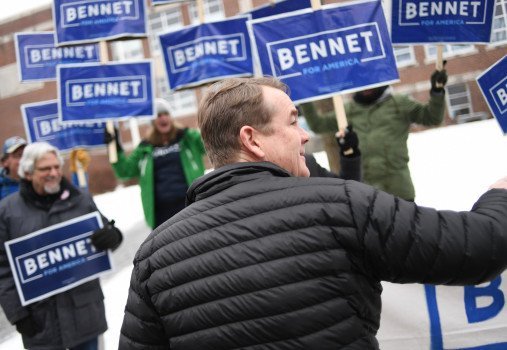 I really enjoyed this New York Review of Books interview with Colorado Senator Michael Bennet. Susannah Jacob writes about Bennet: “Before he ran, he read history and journalism for “six or eight months” to moor himself by gaining a long view on the present threats to American democracy.  The authors he read included Frederick Douglass, Emma Lazarus, Jill Lepore, Nancy Isenberg, George Packer, Matthew Desmond Plutarch, Montesquieu, and David Blight.

You write about expanding the notion of our founders and adding people in our history and in contemporary life who expanded America’s progress—Frederick Douglass, Elizabeth Cady Stanton, José Martí, others. I would love for you to continue to explain and elaborate, but also clarify precisely what that means.

I think that the job of Americans since the founding—which we’ve never done perfectly, ever, including at the founding itself, obviously—has been to make this country more democratic, more fair, and more free. Small-d democratic, more fair, and more free. And to fight to force America to keep the promises that America made on the page, as Martin Luther King Jr. put it the night before he was killed in Memphis.

I still think that’s our job as American citizens. I believe every single one of us has the responsibility to be a founder. In our time what that means to me is, among other things, making sure that every single person that’s eligible to vote actually casts a vote in this country, and making sure that every kid in America who’s born poor has the chance to get out of that poverty, get a quality education, so they, too, can participate in the democracy.

How should we reckon with the original founders’ mistakes and, at the same time, take direction from them? How do you approach that?

I do that every single time I have a middle school class or a high school class come visit me. We talk about how the building they’re sitting in was built by enslaved human beings. Not this building, but the Capitol across the street.

And that leads to a discussion about Frederick Douglass, about the Civil War, about what was at stake, because I tell them the founders did two astonishing things in their generation: they led an armed insurrection against the colonial power that succeeded—we call that the Revolution—and they wrote a Constitution that was ratified by the people that would live under it.

They [also] did something horrific and reprehensible, which is that they perpetrated human slavery. It took other Americans to correct that terrible wrong, just as it took generations of Americans to fight so that women in this country would have the right to vote, so that my daughters could have the right to vote. I think of those people as founders, too, as consequential and as substantial as the people who wrote the Constitution.

How do the middle schoolers respond?

How did your reading come up in conversations with people you met while campaigning?

George Packer’s Unwinding(2013), which is on that table somewhere, and Matthew Desmond’s Evicted (2016) both speak exactly to the underlying contemporary issues that we’re facing in our economy, an economy that for fifty years has not worked well for most Americans. When I’m on the campaign trail I hear people say, “We’re working really hard [and] can’t afford housing,” [or] healthcare, some combination of housing, healthcare, education, early childhood education. I think about the families in my school district who say, “We are killing ourselves, no matter what we do, we can’t get our kids out of poverty.”

Desmond does a very, very good job of close-quarter reporting back to America on the effects of federal housing policy, how it has made working peoples’ lives more difficult in many cases, not easier. And I think in Packer’s reporting, what you see is the strains on a democracy when you’ve got an economy that works well for the people at the very top but not for everybody else.

What about the history? Were there times when you were learning from exposure to people on the campaign trail, where you saw the parallels between observations made in the history to people you were meeting or what they were describing?

There’s really nothing new under the sun. I think we have a tendency to over-assess the novelty of new conditions that arise, and we also have an under-appreciation for the effect we can have as individuals on history. Including elected officials, but I wouldn’t say just elected officials.