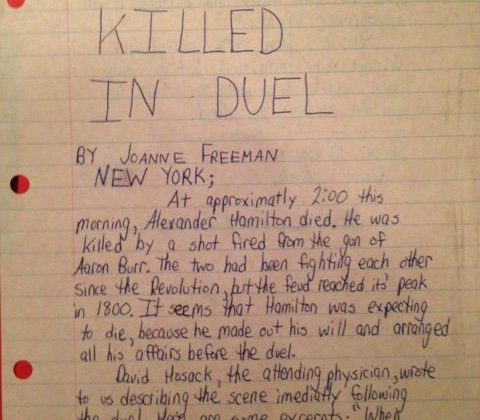 Here is a taste of the Yale historian‘s recent piece at The Washington Post:

Historians have been busy in recent months, and for good reason. Almost every day brings a stream of political questions from all quarters: Has this happened before? Is it truly unprecedented? Is it dangerous? What are the implications?

History has been used in two ways to answer these questions. First, it has been yoked to ongoing debates, with public figures deploying historical precedent (imaginary and otherwise) as needed. Front and center in this dialogue have been the Founders, a seemingly uncontestable source of authority for any and every claim.

Second, history has been a shorthand source of consolation in the face of an onslaught of wrongdoing and corruption that is evading, perhaps defeating, the rule of law.

Justice may not prevail at present, this argument goes, but the eyes of history will expose the ugly truth, a phenomenon that Sen. Mitt Romney (R-Utah) branded “history’s rebuke.”

Historians have played a major role in both conversations. Well aware of the importance of understanding the roots of the current crisis, and faced with an onslaught of bogus historical claims, they’ve had much to say in the public sphere — and it matters. The New Yorker registered the trend last month with an article on “#twitterstorians,” historians on Twitter who engage with one another and with the public to “de-Trumpify American history.” There has been blowback against this trend, with some claiming that historians are scholars, not pundits. Others contend scholars who engage with the public aren’t “serious” about their work, an idea that is thankfully fading — albeit gradually. But in truth, given the unprecedented nature of our crisis, there could be no better time — indeed, no more urgent a time — for historians to engage the public with gusto.