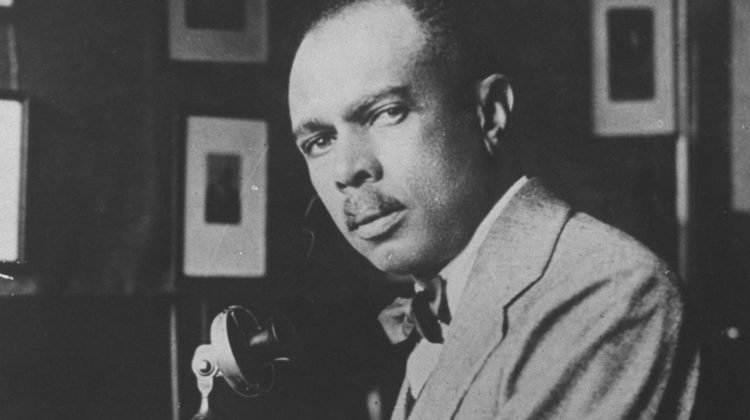 Yesterday in my Created and Called for Community (CCC) class at Messiah College we discussed James Weldon Johnson‘s poem “The Creation” (1922). It is one of seven poems in his 1927 collection God’s Trombones: Seven Negro Sermons in Verse.  Read it here.

My colleague (and Dean) Peter Powers, a scholar of religion and the Harlem Renaissance, writes:

“The Creation”  is found within the collection of God’s Trombones, which Johnson conceived as an interlinked set of sermons modeled on the style of traditional African-American preachers. Johnson thought of these preachers’ voices, with all their power and emotional range, as God’s trombones,” and saw clear links between the preaching, writing, and music-making of African Americans during this time.  All three forms of expression conveyed originality and creativity, and so could serve as wellsprings of African-American aspirations of freedom .

In writing these sermons into poetry, Johnson sought to communicate both authenticity and dignity.  He was troubled by many writers of his time (both white and African American) who used literary conventions and cliched dialect that depicted African American speech as malformed and unintelligent.  Johnson felt such depictions could perpetuate racist stereotypes that African Americans were incapable of significant cultural achievements in written English.  So instead of deliberately using misspellings and outrageous grammatical constructions, Johnson evoked the oral tradition in a more nuanced way through sentence structure, syntax, and word choice.  The aesthetic choice suggests that the oral tradition is high art in and of itself, as well as the basis for producing other great works of art.  This idea–that great art should be rooted in the folk tradition even as it transcends it–became a signature aesthetic of the Harlem Renaissance.

“The Creation” is a sermon. It is meant to be preached. So I decided to play a reading of the poem by African-American clergyman and vocal artist Wintley Phipps. I asked the students to follow along with the printed text and try not to get caught-up with the images. I wanted this exercise to cultivate the moral imagination.

I asked the students to compare Johnson’s interpretation of Genesis 1 and 2 with the actual Old Testament text they read on Monday.  Several students connected Johnson’s poem to the second creation account (Genesis 2:4-2:25), an account that reveals the personal and compassionate nature of God.

We talked about the poem as a product of Jim Crow America.  I wanted the students to see that James Weldon Johnson’s understanding of humanity was more theologically and biblically sound than the views of the Christian defenders of segregation.  We returned to Bruce Birch’s essay and talked again about the Judeo-Christian belief that all human beings are created in the image of God.  Human dignity and worth has nothing to do with the color of one’s skin. Johnson knew this.

One student connected Johnson’s poem to Bruce Birch’s distinction between the “ethic of doing” and the “ethic of being.”  In “The Creation,” Johnson writes:

Then God walked around,

And God looked around

On all that he had made.

He looked at the sun,

And he looked at the moon,

And he looked at the stars;

He looked at the world

With all  its living things,

Then God sat down–

On the side of a hill where he could think;

By a deep, wide river he sat down;

With his head in his hands,

Till he thought: I’ll make a man!

This student noted that before God acted to create humankind, he thought about it.  Johnson says that God “thought and thought” with “his head in his hands.” It was an important reminder that we often need to engage intellectually with the world before we act in the world.

Finally, I told the students that Johnson’s poem serves as a wonderful transition from this week’s focus on the biblical creation story to next week’s conversations about creativity.  Johnson wrote a poem about creation.  But “The Creation” is also a creative work.  Because we are created in God’s image we are called to creativity.  More on this next week.