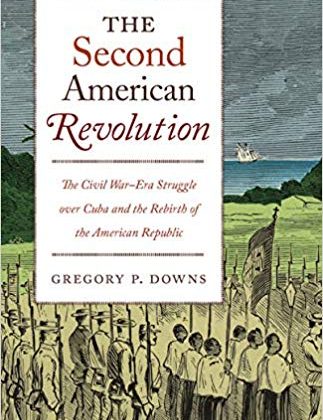 Gregory Downs is Professor of History at the University of California, Davis. This interview is based on his new book, The Second American Revolution: The Civil War-Era Struggle over Cuba and the Rebirth of the American Republic (University of North Carolina Press, 2019).

JF: What led you to write The Second American Revolution?

GD: A gnawing pit in my stomach and a sense of unfinished business and a golden opportunity. The gnawing pit was from a feeling that I hadn’t done what I genuinely intended to in my American Historical Review essay “The Mexicanization of American Politics: The United States’ Transnational Path from Civil War to Stabilization.” I began that research with an interest in the interaction between domestic/national politics and international events, in the way that events in other nations shaped the discourse around what was possible or probable, and I wanted to use this to show U.S. politics as less bounded than our received terms convey, to explore the mutual construction of what gets classed as national and trans-national history, and to capture the ebb and flow of ideas through particular domestic political contexts. In the process of following the inflow of ideas about Mexican crises to U.S. politics in the 1850s-1870s, however, I never got to the truly interactive nature of those connections, and so in some ways reproduced a domestic framework, in which the United States was influenced by cultural ideas about other nations. This made me uncomfortable, as I knew there was a great deal to the Mexican side of the story that I hadn’t explored, and it also gave me a sense of unfinished business: how could I go further in exploring the mid-19th century as a broad crisis in republican theory, in which calculations of how (and whether) republics survived were shaped by ideas and political actors moving from one nation to another. There was much more to be said about the relationship between the United States mid-century crises and those in other countries.

The opportunity came in the Brose Lectures which gave me a format and an excuse to explore ideas that were historiographically important but might not fit easily into a book. And as I began reading and thinking more deeply, I became more impressed with the ways that the literature was already working to incorporate a multi-sided view of the U.S.-Mexican influence (especially in work by Erika Pani and Pat Kelly and others) and also with a thread I had worried over earlier but not followed: the centrality of Cuba. By following Cuban revolutionary exiles, I was able to find a way to follow circuits into and out of different countries’ domestic politics and to explore the connection between the revolutionary remaking of U.S. political structures and a global revolutionary wave that rose and then fell in the mid-19th century.

JF: In two sentences, what is the argument of The Second American Revolution?

GD: The Civil War was not merely civil–meaning national–and not merely a war, but instead an international conflict of ideas as well as armies. Its implications transformed the U.S. Constitution and reshaped a world order, as political and economic systems grounded in slavery and empire clashed with the democratic process of republican forms of government.

JF: Why do we need to read The Second American Revolution?

GD: The book examines the breadth of U.S. politics at a moment when we need to recover our sense of the bold and of the possible. Much of the book is dedicated to exploring those international currents I mentioned, and those have important (I believe) historiographical ramifications for U.S. history and potentially some interest for historians of Cuba and the Caribbean and 19th century Spain.) But the book also turns inward to examine the norm-breaking boldness of U.S. Republicans in the 1860s as they created new states, forced constitutional amendments through, marginalized the Supreme Court, and in other ways significantly altered the political system. Then, I argue, they covered their tracks in order to make their achievements seem moderate, and we have helped them do so by scolding them for their moderation. But in fact no political candidate offers solutions anywhere near as bold as “moderate” 1860s Republicans; no one matches John Bingham in threatening to dissolve the Supreme Court entirely if it doesn’t recognize the role it must play. Instead we have fallen into calling for respect for norms that are—as in the 1840s and 1850s—no longer respected. When faced with those norm violations, we tend to call for the referees. But there are no referees, other than the electorate. And to the electorate we make claims about broader failings but can’t offer plausible solutions; we tell them the political system is broken but don’t fix it. I think we need to recover our boldness and abandon our sense of futility. Rethinking the constitutional transgressions of the Civil War is one way we can expand our own political thinking to make it at least approach the boldness of allegedly moderate 1860s Republicans, and thus discover ways out of problems like the contemporary Supreme Court, the Senate, and other sticky but intractable problems of U.S. politics.

GD: As a child I was raised between Kauai and my extended family’s home of central Kentucky and my extended family’s eventual new home in Middle Tennessee, and I was from a young age fascinated by the differences between those places, by the way that race and politics and memory worked so differently in Kauai than in Kentucky, and by the shadow that events (the overthrow of the Hawaiian monarchy or the Civil War) continued to gnaw upon the present. I worked as a journalist and as a high school teacher, so I didn’t always know that I would be an academic historian, but I always believed that the study of the past was venerable, difficult, and essential.

GD: I am working on completing my friend Tony Kaye’s manuscript on Nat Turner, a project he was working on when he died. After that I have many projects I am contemplating and am enjoying the time to reflect on what I most want to do and most feel challenged by.