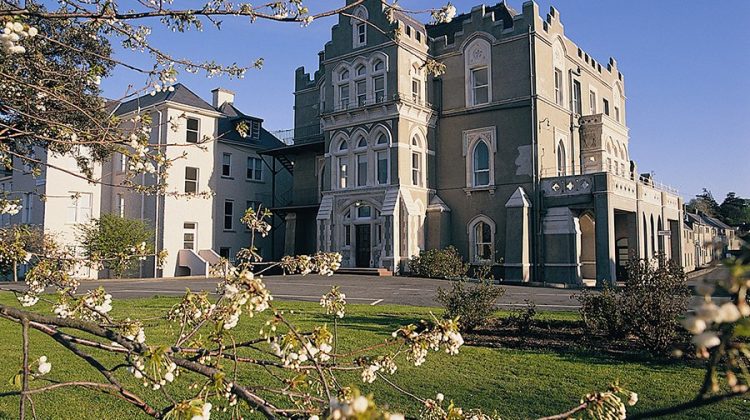 Yesterday in Created and Called for Community we read an excerpt from John Henry Newman‘s “What is a University,” a chapter in his 1852 book The Idea of a University.  Newman wrote this book while serving as rector of Catholic University of Ireland. (today it is known as University College Dublin), a school that he helped found.

We started our conversation, as we always do, by sourcing the document. Who was Newman? Several students found it interesting that Newman was not welcomed to teach at Oxford University, an Anglican institution of higher learning, after he converted to Catholicism.  This was a great opportunity to think about previous course readings.  As we learned from Randy Basinger’s recorded lecture last week, Christian colleges and universities often place boundaries on faculty and students. These boundaries are usually defined by belief and behavior rooted in the particular school’s mission and understanding of Christian faith. In 19th-century England, Oxford was a Protestant institution. I pointed out that Oxford was not as inclusive as present-day Messiah College, a Christian college that hires Protestants, Catholics, and Orthodox believers.  As we noted last week, other Christian colleges such as Wheaton College, Gordon College, or Calvin University do not hire Catholic professors.  If Newman were teaching at one of these colleges at the time he converted to Catholicism, he would need to leave.

At this point I paused and explained how I might teach this document differently in a history course.  I imagined teaching Newman’s ideas in a course on 19th-century British history.  In such a course my primary goal would be to get students to think about what Newman’s essay teaches us about his world.  But in CCC, my primary goal is less about getting my students to understand the “foreign country” of 19th-century Great Britain and more about trying to get them to think about whether Newman has anything to offer our understanding of Christian higher education today.

It was now time to dive into the text.  I started the conversation by asking the question in Newman’s title: “What is a University?” Some students were drawn to Newman’s claim that a university is “a place for the communication and circulation of thought, by means of personal intercourse….” I asked them to suggest some ways in which “thought” is communicated and circulated at a university.  Students, of course, mentioned their professors imparting knowledge in formal class settings.  But I wanted them to think beyond the classroom.  We talked about the word “circulate.”  How do ideas circulate on a college campus? Like bees released from the hive, ideas should be buzzing constantly around the campus.  They should fly out of the classroom door and fill the sidewalks, cafeteria, and dorms–constantly circulating through conversation and discussion.

We also discussed Newman’s idea that the university is a place–a real, flesh and blood, place.  Newman writes: “The general principles of any study you may learn by books at home; but the detail, the colour, the tone, the air, the life, which makes it live in us, you must catch all these from those in whom it lives already.”  In an age of online learning, virtual reality, and the internet I wondered if my students thought Newman’s call for face-to-face learning was still relevant?  I was surprised that so many students, struggling to keep their phones out of sight as they consulted an essay published on paper, seemed to agree with him here.

Several students wanted to talk about Newman’s idea of the university as a place focused on character building. We had a good discussion here about gender.  Newman often thinks of character in masculine terms.  He wants his university to produce good 19th-century “gentlemen” with proper “carriage,” “gait,” and “gestures.” But my students also agreed that some of the character traits Newman hoped students would learn in college were still relevant today.  My students wanted an education that helped them be more courteous and conversant.  They wanted a university to help them develop “the talent of not offending,” “delicacy of thought,” “happiness of expression,” “taste and propriety,” “generosity,” “forbearance,” and “candour.” These character traits, they argued, transcend time (the 19th-century) and gender.  The students universally agreed with my claim that the modern pluralistic university is no longer very concerned about character building.

We closed class by discussing liberal arts education as a form of “catechising.” Newman writes:

Truth, a subtle, invisible, manifold spirit, is poured into the mind of the scholar by his eyes and ears, through his affections, imagination, and reason: it is poured into this mind and is sealed up there in perpetuity, by propounding and repeating it, by questioning and requestioning, by correcting and explaining, by progressive and then recurring to first principles, by all those ways which are implied in the word “catechising .” In the first ages, it was a work of a long time; months, sometimes years, were devoted to the arduous task of disabusing the mind of the incipient Christian of its pagan errors, and of moulding it upon the Christian faith.

For most of my students, “catechism” is a foreign word.  They attend evangelical churches that do not offer formal programs of catechism designed to shape the mind, heart, and soul of young women and men in the congregation.  Catechism is an invitation to spiritual formation.  Spiritual growth seldom comes through the mountain-top experience at a weekend youth retreat.  It comes instead through the daily grind of practicing the spiritual disciplines–scripture reading and memorization, prayer, fasting, and other practices that take our focus off self and put it on God and others.

This is how Newman understands the catechizing nature of a liberal arts education.  Intellectual formation comes through repetition, discipline, questioning, requestioning, correcting, explaining, and the regular appeal to “first principles.” Yes, students may get temporary intellectual “highs” as they encounter an inspiring professor or attend an undergraduate conference, but the”arduous task” of “disabusing the mind” of errors and “moudling” it in truth takes time.  It takes a lifetime.

On Monday we start the “Creation” unit.  We will begin in a very familiar place.