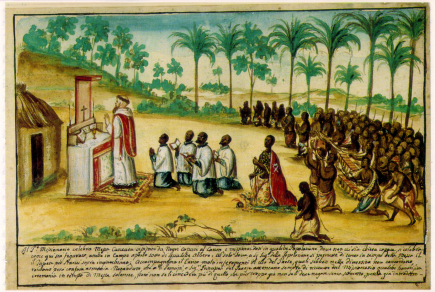 If any answer to a question about black people’s faith in revolution during the Age of Revolution hinges on contingencies—which black people? when? where?—questions about the role of faith in black people’s responses to the Age of Revolution are even less susceptible to generalization. The late eighteenth century was famously the time when evangelical Christian movements first sought black converts in English-speaking North America. Baptist and Methodist churches engaged in the most successful outreach to the enslaved. Many black Christians were drawn to Old Testament stories of a vengeful God’s complicated relationships with his enslaved Chosen People; their faith held that God would deliver his newly Chosen from bondage just as he had delivered Israelites from Pharaoh. This could and did inspire both a revolutionary commitment to bring God’s justice to Earth, and a quietist conviction that the enslaved must wait for divine deliverance. When black Virginians debated a planned uprising in 1800, both cases were made. One conspirator argued for delaying the insurrection until “God had blessed them with an Angel” like the one he sent when “the Israelites . . . were carried away [from Egypt] by Moses.” He was answered with a passage drawn from Leviticus in which God promised that “five of you shall conquer an hundred and a hundred, a thousand . . . enemies.” The potential conspirators’ faith was integral to the way they thought about revolution, but faith did not create lines separating those who rebelled from those who did not. Instead, it offered narrative tools the enslaved could use to think about the daunting problems that revolution posed.

Faith created communities of people who could trust one another enough to risk the collective resistance necessary for revolution. An unusually clear illustration of this dynamic can be seen in a little-known 1800 uprising in Freetown, Sierra Leone. Freetown was a British colony that had been organized by the Sierra Leone Company and settled by black Loyalists about a decade after the end of the Revolutionary War. Most of the settlers had been slaves in North America. Whether in Nova Scotia, where they were first taken after the War, or in Freetown, they organized themselves into tight-knit religious communities. Some were Baptists, others Wesleyan Methodists, and still others Huntingtonian Methodists. All chose to migrate to Africa within congregations, and all lived and organized themselves in Africa as congregational communities. From their arrival in 1793 until the uprising in 1800 they grew increasingly unhappy about the political and religious authority claimed by the white Governors sent by the Company. The settlers had seen their passage to Africa in explicitly religious terms, celebrating their arrival by hailing the “Year of Jubilee” when “ransomed sinners” returned “home.” Soon after their arrival, they petitioned the Company in the name of “Preachers of the Gospel” and the “Setlers in this Place.” In later complaints, they compared themselves to the “Children of Esaral” seeking “the promise land.” These black settlers living in Africa conceived of their mission in explicitly spiritual terms, and their understanding of their churches as gathered communities allowed them to organize an uprising to fight the Company for the right to live as autonomous black communities. When they rose to that fight, they concluded the document in which they asserted their right to live under their own laws by declaring that document, and by extension their community, to be “just before God and Man.”