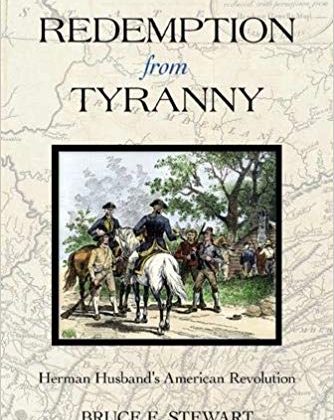 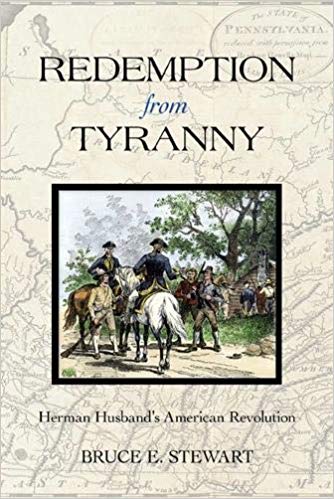 Bruce Stewart is Associate Professor of History at Appalachian State University. This interview is based on his new book, Redemption from Tyranny: Herman Husband’s American Revolution (University of Virginia Press, 2020).

JF: What led you to write Redemption from Tyranny?

BS: I first heard of Herman Husband’s role in the North Carolina Regulation movement as a young history buff growing up in the Piedmont region of North Carolina. I encountered him again as a Ph.D. student researching my dissertation (which became my first book, Moonshiners and Prohibitionists), when I learned that Husband also participated in the Whiskey Rebellion in southwestern Pennsylvania. Many years later, as I was going down a series of rabbit holes trying to find my next project, I searched for a biography of Husband and discovered that the only full-scale account of his life was published in 1940. While I later discovered an excellent unpublished Ph.D. dissertation on Husband written in 1982, I knew that the revolutionary American deserved more attention. And just like that, my next project was born.

JF: In two sentences, what is the argument of Redemption from Tyranny?

BS: Influenced by personal experience, Western political thought, and radical Protestantism, Herman Husband viewed the Revolution as an opportunity to forge a new republic that promoted economic equality among white men. Only by preventing the concentration of wealth in the hands of the few, he argued, could ordinary white Americans achieve economic independence, retain their political rights, and redeem the young nation from tyranny.

JF: Why do we need to read Redemption from Tyranny?

BS: Redemption from Tyranny uses the life of Herman Husband as a lens through which to explore how ordinary people shaped–and were shaped by–the American Revolution. Such a bottom-up approach complements recent scholarship that focuses on the experiences of common folk in the Revolutionary Era, allowing scholars to raise questions that broaden our understanding of the origins and nature of democracy in the United States. What did the Revolution mean to those who experienced it? How radical was the American Revolution? What role did evangelical religion play in politicizing ordinary people? In what ways did common folk demand not only political, but also economic equality, and which was most important to them? This final question remains relevant today, as Americans continue to debate the role that government should play in maintaining its citizens’ political and economic rights. Ultimately, because Husband’s vision of the young republic–one that stressed a more equitable economic system–represented an ideology shared by other common folk, his story enables us to gain fresh insight on the sources of agrarian radicalism, the obstacles that confronted reformers, and the mixed results of the American Revolution.

BS: I can’t recall the exact moment when I decided to become an American historian. Looking back, I have always been interested in history. As a child, I often accompanied my father to Civil War battlefields, so I credit him for instilling a love of history in me. My high school history teacher, Keith Walker, further sparked my fascination with history. I was by no means a stellar high-school student, but I enjoyed his class. When I got to college, I became a history major and by the end of my freshman year, I knew I wanted to be a professor of history (I credit those trips with my father to Gettysburg and other battlefields for leading me to focus on American history).

BS: My next project is co-writing a comprehensive study of Reconstruction in North Carolina. The last such history was written in the early twentieth century and contains–to put it nicely–major interpretation errors. My co-author and I are currently completing the research phase (I recently wrapped up most of my research at UNC-Chapel Hill’s Southern Historical Collection before the birth of my son at the end of 2019, and I plan on visiting Duke University’s Special Collections and the State Archives of North Carolina this year). Because of the enormous scope of the project, we don’t have a projected completion date yet.