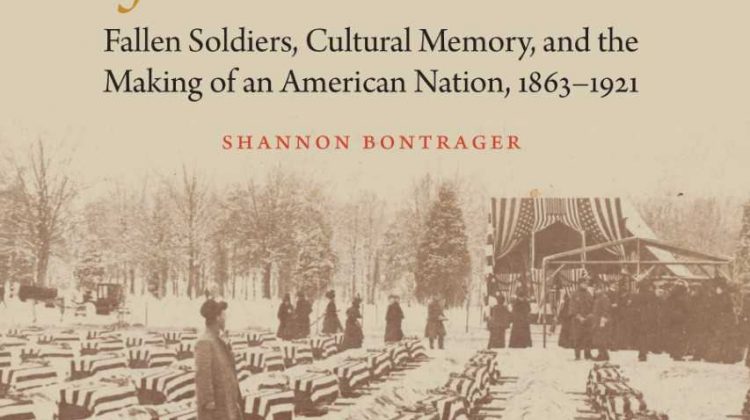 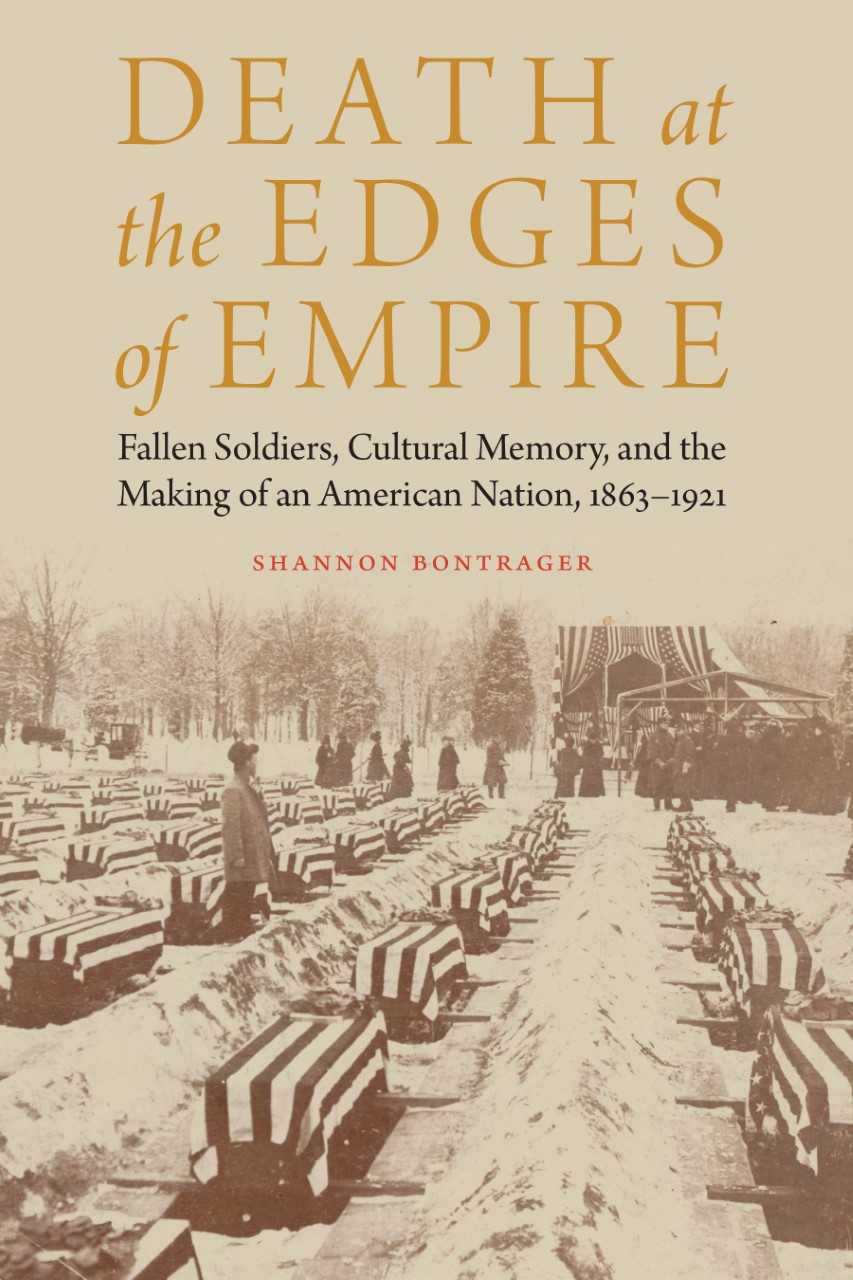 Shannon Bontrager is Associate Professor of History at Georgia Highlands College. This interview is based on his new book, Death at the Edges of Empire: Fallen Soldiers, Cultural Memory, and the Making of an American Nation, 1863-1921 (University of Nebraska Press, 2020).

JF: What led you to write Death at the Edges of Empire?

SB: One of the significant memories I have from my childhood was my grandmother’s (Mary Ann Bontrager) funeral. I was 13 and hers was my first funeral and it was such a sad dreary December Michigan day. She was a lovely woman who would peel the skin of my apples with a knife and give it to me salted, she made the best pound cake and sauce of anyone around, and she sadly died from cancer in 1986. My grandparents had left the Amish faith long before my birth and they were shunned (especially my grandfather, Ben) for doing so. My grandfather’s Amish family attended her funeral and Ben’s Amish sister even oversaw the food preparation for the meal afterwards. I remember getting my food and sitting with my grandfather at the table to eat and I did not suspect anything was up. But I remember my grandfather finishing quickly and then getting up to leave while we all were still eating. Perhaps it was one of my uncles or my dad, but I recall someone saying grandpa had to leave so that the Amish family could sit down to eat. The implication being that although they attended the funeral and even prepared the food for my grandfather, they could not have the decency to eat the funeral meal in his presence. I was shocked and angry that the boundaries of the shunning remained in place while commemorating my dead grandmother. I thought my Amish kin were cruel. My anger, however, was misplaced, as later I found out from my dad who reminded me that my Amish relatives actually had defied their Bishop who had decreed that in order to enforce my grandfather’s shunning my grandmother’s funeral was off limits to them. Their presence and their preparation of the food was a collective defiance of authority and boundaries out of respect for my grandmother’s death and my grandfather’s grief. They were risking a lot of social capital to be there. But the memory never left me and I found myself returning to it as I began to study the American past in earnest. The number of ways that people in society could use the dead (particularly the war dead) to remember, manipulate, forget the past, and create the present continued to astound me. This was particularly clear when in the late 1990s the family of Michael Blassie, who had been buried as the Vietnam War Unknown Soldier in Arlington National Cemetery, identified their son using DNA evidence. They disinterred their son’s body from Arlington so that he could be closer to their home and so that the family could finally grieve after so many years of not being able to mourn truly. For me, the Blassie family signaled a moment as if the past had come back to confront the present in a similar defiant way that my Amish relatives defied their Bishop. To do what was right even if it meant crossing reinforced social boundaries. Did other people have to endure these kinds of experiences? As my research unfolded, I found the answer was often yes and it was often yes across the decades of time and was actually a central and critical theme of the American experience.

JF: In two sentences, what is the argument of Death at the Edges of Empire?

SB: Americans, since the time of Abraham Lincoln’s Gettysburg Address, have developed a collective memory of empire that could be hidden, particularly but not exclusively, in the rituals and traditions of commemorating the war dead. These imperial memories work incredibly hard to separate the past from the present and the citizenry from memory by hiding the practices and realities of American empire behind the cultural memory of democratic republicanism.

JF: Why do we need to read Death at the Edges of Empire?

SB: Americans are experiencing a particularly interesting time of flux and change. The past five years have given Americans multiple anniversaries to commemorate: from the 150 year anniversary of the ending of the Civil War and the beginning of Reconstruction, to the 100 year anniversary of the First World War, to the 75th anniversary of the Second World War. We are literally living at the crossroads of memory. These moments helped make the very institutions that Americans are now suspicious of and reconsidering. At a time when Americans are increasingly growing disillusioned with religious, government, and private institutions, we are commemorating the moments that made us embrace them. Such a moment of opportunity to reevaluate the present depends crucially on our willingness to let the past fill the present. It is vitally important that when we reassess institutions (and if we choose to keep some and discard others) that we make those decisions with the past fully penetrating the present. Only by making room in the present for the past to thrive, can we determine how we should commemorate the war dead, deal with Confederate monuments, address the health and welfare of U.S. veterans, define who gets access to American citizenship, and in general, frame the kind of institutions that we want and need in twenty-first century America. Death at the Edges of Empire seeks to open a conversation about the institutions and rituals Americans have built around the commemoration of the war dead, it charts how those rituals have changed over time and circumstance, and it signals that the institution of commemoration is now potentially unraveling in real time. By understanding how past Americans often tried to keep the present free from the past, we can better shape our own collective memories by bringing the past into the present.

SB: I lived and worked in the Hashemite Kingdom of Jordan in 1994-95 right in the middle of President Bill Clinton’s attempts to help Jordan and Israel sign a peace treaty. Growing up in a small town in the rural Midwest, I thought these kinds of treaties were impossible. But now in Jordan, I was in the very place where history was happening. It was a time when I was not just witnessing history, I could feel it. Around about this time, my friends and I went to tour an ancient Crusader castle called Kerak Castle in al-Karak. I remember climbing the ruins and being overwhelmed with imagining what life might have been like for Christians and Muslims eight hundred years ago. They lived and fought in the very spot where I was standing. It was a transcendental moment and it was electric. I decided right then and there while sitting on the top of the wall of the ruined palace that I wanted to be a historian. After my year abroad I returned for my senior year in college to a newly developed major in history at my small religious college. I would have to take 8 history courses (I think 4 of them were centered on the U.S.) over my last two semesters to complete the degree but I did it and I nearly got straight As (something that previously was beyond my imagination). It was such a wonderful experience to do nothing but study history and the electricity I felt at Kerak Castle in Jordan continued to power my study of American history and still does.

SB: My next project is tentatively titled “The Affinity of War: Traveling Memory, the War Dead, and the American Empire in France.” It is a kind of volume 2, to Death at the Edges of Empire that focuses on the travelling and transnational memories of the Franco-American interwar and early WWII period (1923-1943). It examines how French and American people took their memories and exchanged them with each other as Americans toured or made pilgrimages to World War I memory sites in France. I conducted research at the French Foreign Affairs Archives outside of Paris a few years ago and I am able to take Franco-American collective memory up to and through the Vichy regime before the U.S. diplomatic staff was forced to escape France in 1943 leaving American cemeteries and monuments commemorating the war dead behind for local French people under Nazi occupation to tend and look after until the Second World War concluded. I think it could be an exciting topic to explore. I am now at the beginning of translating the French language documents into English and then I hope to complete this, my second manuscript.