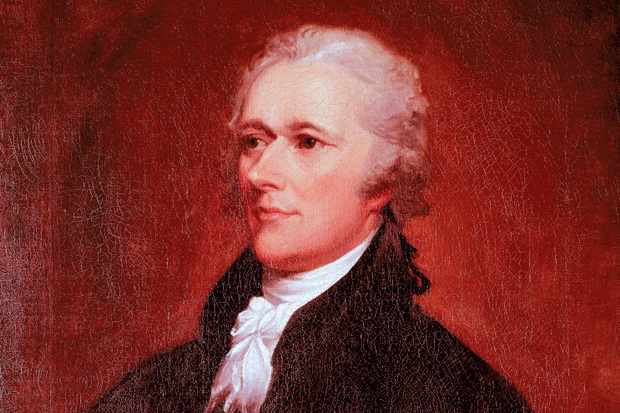 Adam Schiff opened the first day of arguments in the Trump impeachment trial with a quote from an enclosure in an August 18, 1792 letter from Alexander Hamilton to George Washington.  His choice of texts is getting a lot of attention today.

Hamilton’s enclosure was part of his reply to a July 29, 1792 letter from Washington.
While the president was home at Mount Vernon he heard from fellow Virginians (probably George Mason and Thomas Jefferson) who were critical of the way the Federalist administration was conducting policy and interpreting the Constitution.  Washington asked Hamilton to respond to twenty-one popular criticisms of the Federalist-controlled government.

Washington’s criticism No. 14 read: “That the ultimate object of all this is to prepare the way for a change, from the present republican form of Government, to that of a monarchy; of which the British Constitution is to be the model.”

This was a pretty common Anti-Federalist critique.  It was also common among the members of the Jeffersonian opposition to the Federalist administration after ratification in 1789.  These men believed that the Constitution gave too much power to the national government and relied too heavily upon British political customs.  They feared that Washington, Adams (VP), Hamilton (Secretary of the Treasury), and the members of the Federalist-controlled Congress would replace the President of the United States with some form of monarchy.

These Jeffersonian fears are understandable.  Washington often acted like a king.  And everyone knew that Hamilton was an Anglophile.  During the Constitution Convention Hamilton argued that the newly created executive should have a life term.  This, he believed, was the only way of maintaining order and preventing the people from having too much power.  James Madison, who summarized Hamilton’s six-hour speech at the Constitutional Convention, wrote:

As to the Executive, it seemed to be admitted that no good one could be established on Republican principles.  Was not this giving up the merits on this subject.  The Hereditary interest of the King was so interwoven with that of the Nation, and his personal emoluments so great, that he was placed above the danger of being corrupted from abroad–and at the same time was both sufficiently independence at home, one of the weak sides of Republicans was their being liable to foreign influence & corruption.  Men of little character, acquiring great power become easily the tools of intemedling Neibours, Sweden was a striking instance.  The French & English had each their parties during the late Revolution which was effected by the predominant influence of the former.  What is the inference from all these observations?  That we ought to go as far in order to attain stability and permanency, as republican principles will admit.  Let one branch of the Legislature hold their places for life or at least during good behaviour.  Let the executive also be for life.

Of course Hamilton’s ideas were not adopted. The framers decided that the executive would serve a four-year term. But some thought Hamilton had not fully abandoned his earlier commitment to an executive for life.

Below is an excerpt from Hamilton’s response to George Washington  Hamilton argues that Jeffersonian worries about the Federalists turning the presidency into a monarchy are absurd. The real threat of tyranny is not the current administration and its policies, but the possibility that a leader might emerge who would tap into the passions of the people.  I have highlighted the passage used by Adam Schiff this afternoon.

The idea of introducing a monarchy or aristocracy into this Country, by employing the influence and force of a Government continually changing hands, towards it, is one of those visionary things, that none but madmen could meditate and that no wise men will believe.

If it could be done at all, which is utterly incredible, it would require a long series of time, certainly beyond the life of any individual to effect it. Who then would enter into such plot? For what purpose of interest or ambition?

To hope that the people may be cajoled into giving their sanctions to such institutions is still more chimerical. A people so enlightened and so diversified as the people of this Country can surely never be brought to it, but from convulsions and disorders, in consequence of the acts of popular demagogues.

The truth unquestionably is, that the only path to a subversion of the republican system of the Country is, by flattering the prejudices of the people, and exciting their jealousies and apprehensions, to throw affairs into confusion, and bring on civil commotion. Tired at length of anarchy, or want of government, they may take shelter in the arms of monarchy for repose and security.

Those then, who resist a confirmation of public order, are the true Artificers of monarchy—not that this is the intention of the generality of them. Yet it would not be difficult to lay the finger upon some of their party who may justly be suspected. When a man unprincipled in private life desperate in his fortune, bold in his temper, possessed of considerable talents, having the advantage of military habits—despotic in his ordinary demeanour—known to have scoffed in private at the principles of liberty—when such a man is seen to mount the hobby horse of popularity—to join in the cry of danger to liberty—to take every opportunity of embarrassing the General Government & bringing it under suspicion—to flatter and fall in with all the non sense of the zealots of the day—It may justly be suspected that his object is to throw things into confusion that he may “ride the storm and direct the whirlwind…”

The truth unquestionably is, that the only path to a subversion of the republican system of the Country is, by flattering the prejudices of the people, and exciting their jealousies and apprehensions, to throw affairs into confusion, and bring on civil commotion. Tired at length of anarchy, or want of government, they may take shelter in the arms of monarchy for repose and security.

Hamilton is saying that the real threat to republicanism is a populist demagogue.  You can see why Schiff thought this passage was appropriate for an impeachment trial.