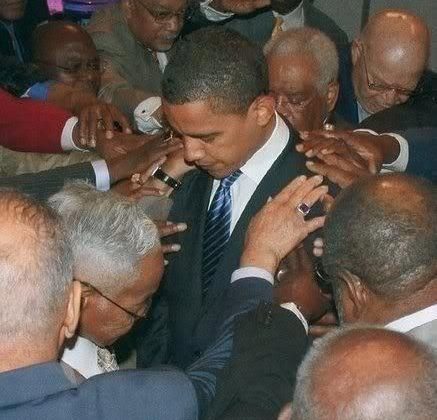 Of all the court evangelicals, Tony Perkins talks the most about the contractual relationship between Donald Trump and conservative evangelical Christians.  Perkins supported Ted Cruz in the 2016 GOP primaries, but now he is all-in for Trump.

But Perkins has been clear about one thing: if Trump stops delivering on the issues he and other evangelicals hold dear, the president can expect to lose evangelical support in 2020.  So far that is not happening.

In a piece republished at Life News, Perkins calls Trump “the best president Christians have ever had.”  Perkins may be right, assuming that one defines “Christians” as political identity group of white,  right-wing, Christian nationalist, evangelical culture warriors.

There is nothing in Perkins’s piece that we haven’t seen before.  It all comes down to abortion and religious liberty.  I critiqued this two-pronged approach to politics in Believe Me: The Evangelical Road to Donald Trump.

But this time around I was struck by how court evangelicals claim that they “didn’t need a preacher in the Oval Office.”  Here is Perkins:

Christians, the president repeated, “have never had a greater champion — not even close — than you have in the White House right now. Look at the record,” Trump urged. “We’ve done things that nobody thought was possible. We’re not only defending our constitutional rights, we’re also defending religion itself, which is under siege.” That’s important, he argued, because “America was not built by religion-hating socialists. America was built by churchgoing, God-worshiping, freedom-loving patriots.”

And those patriots, President Trump insisted, are the ones being attacked. “Faith-based schools, charities, hospitals, adoption agencies, pastors were systematically targeted by federal bureaucrats and ordered to stop following their beliefs,” he pointed out. That all changed when his teams at HHS, Justice, and Education got involved rolling back the waves of hostility aimed directly at men and women of faith. “The day I was sworn in, the federal government’s war on religion came to an abrupt end,” he said. “My administration will never stop fighting for Americans of faith,” Trump vowed. “We will restore the faith as the true foundation of American life.”

Maybe that, as Pastor Jentezen Franklin prayed, is what believers appreciate most about this administration. “…America didn’t need a preacher in the Oval Office,” he said, bowing his head. “It did not need a professional politician in the Oval Office. But it needed a fighter and a champion for freedom. Lord, that is exactly what we have.” And more than that, I thought, as I watched pastors lay their hands on the president, we have a fighter who isn’t ashamed of the people he’s fighting for. After all, when was the last time you saw a president of the United States from either party surrounded by faith leaders in a completely public and unscripted prayer? It’s rare, I assure you.

On that last sentence: 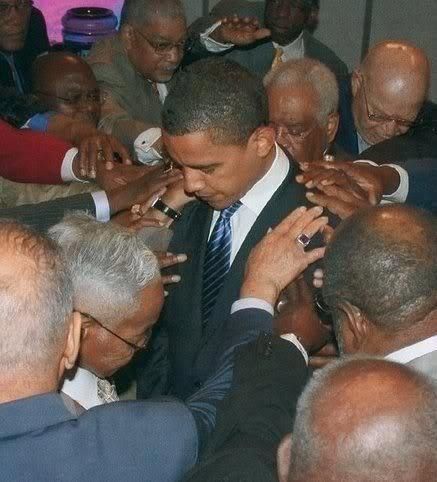 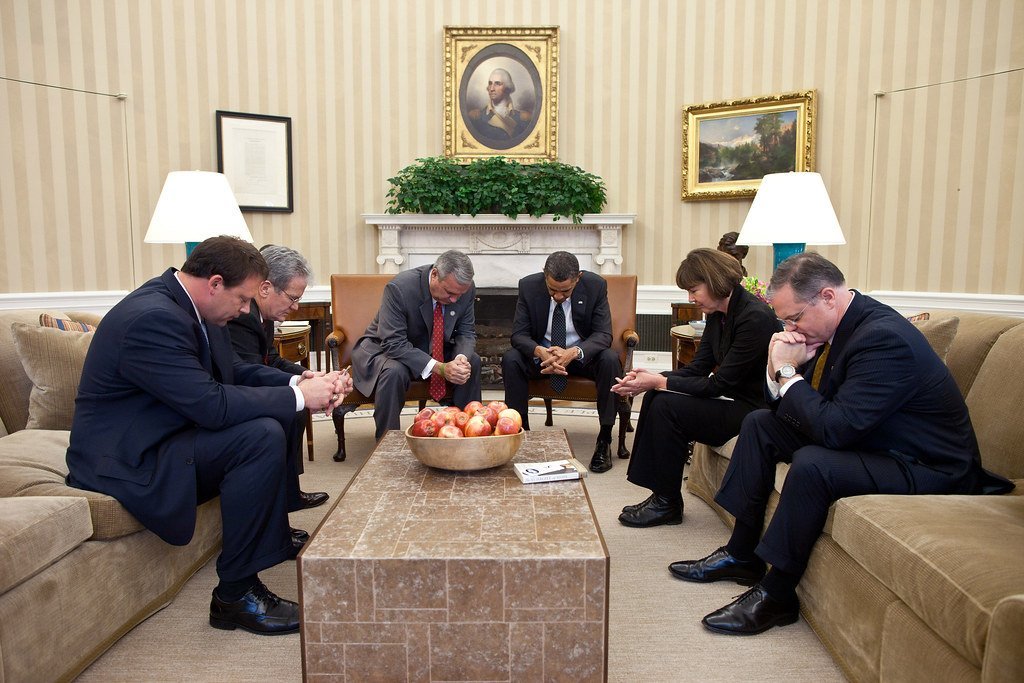 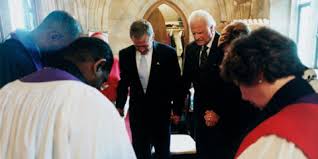 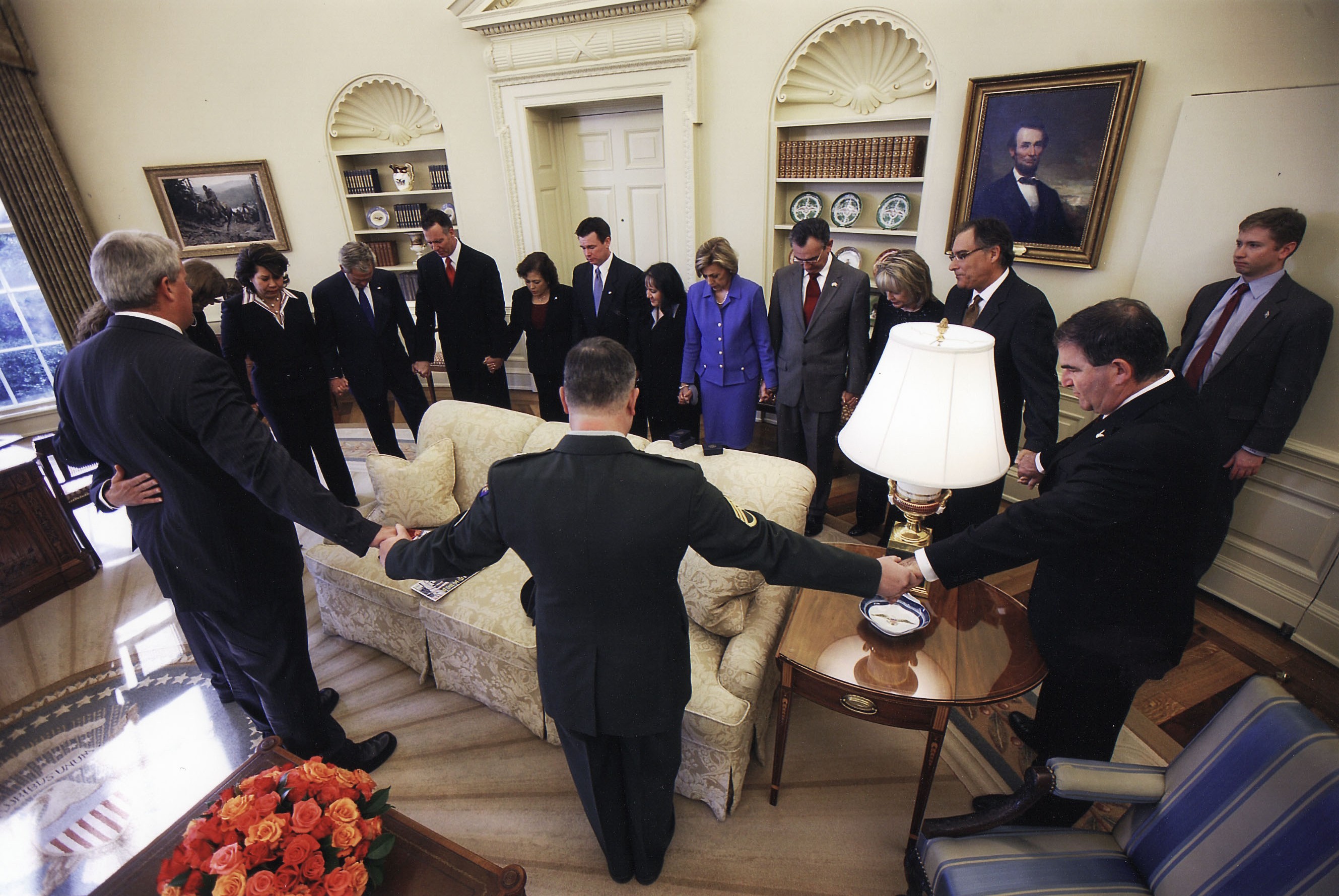 I am not sure if Perkins would count what is happening in these images as “public prayers.”  But I am reminded of Matthew 6:6: “But when you pray, go into your room, close the door and pray to your Father, who is unseen.  Then your Father, who sees what is done in secret, will reward you.”

So what do the court evangelicals mean when they say “we didn’t need a preacher in the Oval Office?” They seem to be suggesting that they don’t need to have a person of Christian character in the office as long as he is delivering on Christian Right policy.  The court evangelicals are essentially saying that Trump’s character–the lies, the misogyny, the narcissism, the demonization of enemies–don’t matter.  “Sure he is a rough dude, and we don’t like some of his tweets, but look what he is doing for us!”  Or “At least he’s not Hillary!” (Christians are not supposed to hate, but they sure hate Hillary).

The court evangelicals have every right to think about politics in this way.  They are free to ignore Trump’s many indiscretions because he is delivering on the things they hold dear.  But if they are going to take this route they need to stop appealing to the Founding Fathers.  These framers of the Constitution understood that the leader of the United States needed to be a person of character.

Here is James Madison in Federalist 57: “The aim of every political Constitution is or ought to be first to obtain rulers, men who possess most wisdom to discern, and most virtue to pursue the common good of the society, and in the next place, to take the most effectual precautions for keeping them virtuous, while they continue to hold their public trust.”

Supporters of Donald Trump must ask if he has the “wisdom” to lead us, the commitment to the “common good” (not just his so-called “base”), and the character to make us a more “virtuous” people. If the president does not measure-up in these areas, the founders believed that he should not be leading the American republic.

Here is Alexander Hamilton in Federalist 68:

Talents for low intrigue, and the little arts of popularity, may alone suffice to elevate a man to the first honors in a single State; but it will require other talents, and a different kind of merit, to establish him in the esteem and confidence of the whole Union, or of so considerable a portion of it as would be necessary to make him a successful candidate for the distinguished office of President of the United States. It will not be too strong to say, that there will be a constant probability of seeing the station filled by characters pre-eminent for ability and virtue.

“Low intrigue” and the “little arts of popularity.”  It almost sounds like Hamilton wrote this with Trump in mind.

According to the Founding Fathers, Trump is unfit for office.   The court evangelicals are supporting an unfit president and breaking with the views of the men who supposedly founded a Christian nation.  But look at the bright side: at least we get to say “Merry Christmas” again!