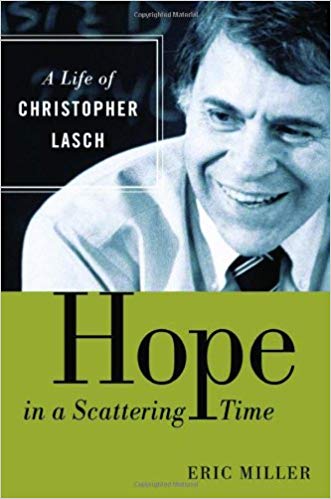 What is populism?  How should we think historically about this term?  I would encourage you to listen to Episode 41 of The Way of Improvement Leads Home Podcast.  In this episode we talk with Georgetown University historian Michael Kazin, the author of several books on populism.  Listen here.

I was also thinking about Eric Miller‘s biography of intellectual historian Christopher Lasch, Hope in a Scattering Time:  A Life of Christopher Lasch.  Lasch was attracted to a particular version of populism.  Here is Miller:

The regnant American belief in “progress,” Lasch contended, far from being a misty vesitge of an older, mythical, millenarian worldview that saw history moving in an upward direction, was instead mainly the mental effect of so many decades of unending improvements in the “quality of life.”  True, these improvements  were only material in nature–which had once upon a time troubled the likes of Nathaniel Hawthorne.  But the apologists for the new order had emerged quickly, having “mastered the tone and bluff of jocular dismissal, the unapologetically pristine defense of everyday comforts,” and such worries were allayed with impressive dispatch.  “No one could argue very long against abundance,” Lasch acidly noted.  Progress, “this tawdry dream of success,” was here to stay.  Lasch’s entirely unsparing depiction to the merest pleasures cast the reign of industrial capitalism not as the triumph of an ideal but as the effecting of a seduction, and the seduced were now sleeping to the steady rhythms of The Economy, shamelessly content, degradingly weak, confident in progress and lost in nostalgia, burning up the world to maintain their tenuous state of warmth.

Between these polar tendencies, “progressivism” and “conservatism,” lay the radical option.  Recognizing humans’ perennial need for the renewal of life, radicals did not give in to the life-denying forms of political and intellectual dependence–whether “traditional” or “progressive”–that characterized both right and left.  Rather, radicals sought through particular practices to cultivate an independence of mind and spirit that, structured within and by the community, could give a person the keenness to detect and strength to resist the political and economic powers that sought always to enthrone themselves as the necessary ends of human life.  In short, while conservatives defaulted wearily to “tradition” and liberals ran after “progress,” radicals pursued virtue–and so justice, Lasch pointed out, if at times only as a hope against hope.

In the nineteenth century this radical political sensibility came to be most fully embodies by populism, Lasch argued, but its antecedents included, along with the Puritans (and other Christian streams), the republicans of the seventeenth and eighteenth centuries, and even some species of liberal thinkers, such as Thomas Paine, who saw in incipient industrial capitalism a threat to the communal world of craftsmen and farmers they thought more desirable.  In the nineteenth century these varying populist trajectories had in the crucible of the industrial economy melded oddly but powerfully to yield a “producer ethic” that was “anticapitalist but not socialist or social democratic, at once radical, even revolutionary, and deeply conservative”; it was preserved most fully in the lives of the petty- bourgeoisie–the lower middle class.  Poised between the “fatuous optimism” of the scientific progressives and the “debilitating nostalgia” of Burkean conservatives, the populist sensibility held firmly to a way of life that is understood to be the foundation of the nation’s promise–the old understanding of the American dream.  “A whole way of life was at stake in the struggle against industrialism,” Lasch concluded, following with special appreciation the argument of populist scholar Lawrence Goodwyn.  “Producerism; a defense of endangered crafts (including the craft of farming); opposition to the new class of public creditors and to the whole machinery of modern finance; opposition to wage labor”: all of these were the battlefronts of the great populist attempt to keep alive another America, another meaning of citizenship.  But at that moment of direct confrontation at the end of the nineteenth century they had lost, steamrolled by progress–by progressives.

The victors had been led by H.L. Mencken’s “civilized minority,” and they became the new ruling class.  Their sociologists lost themselves in fruitless attempts to understand “gemeinschaft” and “gesellschaft” dynamics, typologies that only quickened their sense of disconnection from the past.  Their historians (most eminently, Hofstadter) told self-congratulating tales of their own righteous ascent, stories that only increased their distant from the “uneducated” masses.  Blinded by their confidence in their own progressive march, they misunderstood the past and misread its inhabitants, veering sharply between sentimentality on the one hand and contempt on the other, remaining convinced all the while that, whatever its pitfalls, “modernity” made possibly an undeniably superior way of life….