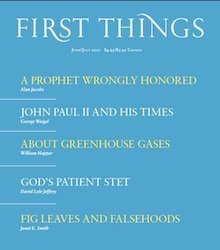 I check the First Things website every day and often link to pieces I find interesting.  But I stopped reading First Things regularly after Richard John Neahaus passed away. (I used to subscribe and read each issue cover-to-cover).

On Friday,  I responded to Carl Trueman’s piece at First Things suggesting that Mark Galli, the editor of Christianity Today, was an “elite” and “out of touch.” Read it here.

Last night I read a piece at The New York Post by First Things senior editor Matthew Schmitz.  It is titled: “Elite Evangelicals once again belittle their pro-Trump co-religionists.”  Here is a taste:

Evangelicalism has always been a populist movement, and its piety has always been closely tied to suspicion of religious and political elites. Movements as various as circuit-riding Methodism, Bible-thumping Baptists and black churches all encouraged the very American idea that the common man knows best.

This populist energy helps explain evangelicalism’s broad appeal, but it causes problems for the evangelical leadership class. It makes the phrase “evangelical elite” almost a contradiction in terms, like “Bilderberg proletarian” or “blue-collar Aspen attendee.” Those evangelical leaders who are recognized as leaders by the evangelical base possess a populist streak. They tend to have gained prominence through electoral politics, mass media or entrepreneurial forms of evangelism — all activities that require a sense of the crowd and a common touch.

By contrast, evangelical leaders who have come up through established institutions tend to acquire the training and tastes of the wider American elite. They often disdain the religious and political populism of the base. Whatever their theological convictions may be, these elites have ceased to be evangelical in a sociological sense. And evangelicalism is more exactly defined sociologically than theologically.

Christianity Today is a case in point. Ask an editor there what she thinks about Israel, Trump, feminism or Fox News, and you will get a very different answer than you would from most American evangelicals. The magazine’s young contributors more ardently desire to freelance for The New Yorker than to appear on Tucker Carlson, despite the fact that their parents would be more impressed by the latter.

These people hold less sway among evangelicals than the editors of liberal publications do among their constituencies.

They also have functionally ceased to be evangelical. There is no dishonor in that. As a former evangelical-turned-Catholic, I am well aware of the drawbacks of the evangelical movement. But writers who trade on an evangelical identity that they no longer really share ought to do the decent thing and admit it.

It’s late, and I still have grading to do, but I got some time last night to write a few tweets about this trend at First Things:

1. Is @firstthingsmag now a populist magazine? Are they now doubling-down on the “liberal elites” rhetoric that is so common among the #ChristianRight and #courtevangelicals? Serious question.

Again, I don’t read First Things regularly.  I have heard things about new editorial directions at the magazine and its new commitment to Christian nationalism.  If the magazine’s move toward populism is well-known among the conservative intellectual world, please forgive my ignorance.  I am just noticing this for the first time.

2. Here is a First Things senior editor and Princeton graduate at the @newyorkpost suggesting that #MarkGalli of #ChristianityToday last lost touch with evangelicalism because he is educated and “elite.” https://t.co/ywlNLh1BAw

3. I always thought @firstthingsmag was an intellectual journal–a magazine that wanted to bring good Christian thinking to public life. Now here is a senior editor saying that it’s a shame that *Christianity Today* is not anti-intellectual enough to be truly evangelical.

Maybe I am reading this the wrong way, but it seems like Schmitz is saying that once the people at Christianity Today (or some other evangelical institution) start thinking, they cease being evangelical.

4. Based on this piece, I am assuming this editor would say the same thing about people like Mark Noll, the author of the *Scandal of the Evangelical Mind*. In that book, Noll laments the very kind of evangelical populism that this FT editor champions in his NY Post piece.

Noll was a longtime contributing editor of Christianity Today.

5. This NY Post piece reads like a slam on evangelical thinking. It is basically saying that evangelicals should stick with “Bible-thumping” and leave the heavy thinking –perhaps the real thinking– to the kind of folks who write for @firstthingsmag

6. Yesterday, *First Things* published a similar piece (it is referenced in aforementioned NY Post piece) along these lines. Grove City College professor Carl Trueman wrote it. I responded to that piece here: https://t.co/i8rMC5EsUX