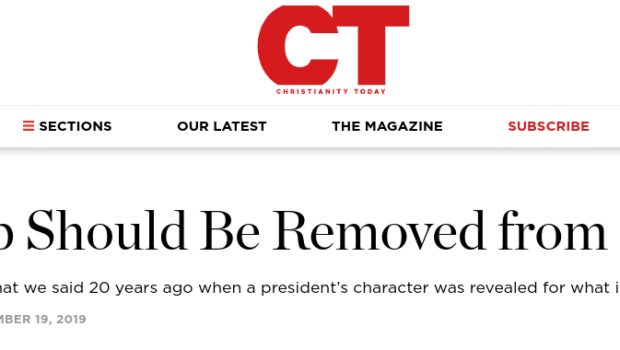 Carl Trueman, a theologian who teaches at Grove City College in western Pennsylvania, thinks that Mark Galli, the editor of Christianity Today and the author of this editorial, is an “evangelical elite” who is “out of touch” with ordinary evangelicals.  Here is a taste of his piece at First Things:

Galli sees the situation as urgent: “If we don’t reverse course now, will anyone take anything we say about justice and righteousness with any seriousness for decades to come?” Yet, to ask the obvious question, what is the alternative? Now, that question can be used as a lazy, rhetorical way of justifying a vote for Trump—or for any status quo, however wicked. But I intend it as a serious inquiry: When someone calls for Trump to be thrown out of office by impeachment or the ballot box, it is reasonable to ask what the available alternatives are. As Mother Theresa is unavailable for the White House, we are really looking at Biden, Warren, or Sanders. I can’t speak to the personal moral qualities of these people, but would voting for them or their policies give Christians any more credibility? Given the role of abortion and LGBTQ rights in their respective campaigns, this is surely something any Christian has to address.

Trueman’s piece seems to suggest that the reduction of abortions in the United States will happen by electing the right POTUS. The implication is that Christians should tolerate Trump because he will appoint anti-Roe v. Wade justices.  I am not convinced that overturning Roe v. Wade will reduce abortion in America any faster than what is already happening.  I made this case in Believe Me: The Evangelical Road to Donald Trump.

Trueman’s piece also suggests that LGBTQ people should not have rights. Is he implying that we should tolerate Trump because he will make sure they don’t get these rights? If so,  I disagree. This is why I, along with the CCCU and NAE,  support Fairness for All.

Indeed, he [Galli] goes so far as to say that he believes the removal of Trump “is not a matter of partisan loyalties but loyalty to the Creator of the Ten Commandments.” That is an astounding claim for the editor of Christianity Today to make, for it involves him accusing every Trump voter of heinous sin, however reluctant or conflicted he may be.

As noted above, Galli is not playing some sanctimonious Pharisee, standing in the Temple of Twitter, thanking God that he is not like other evangelicals—white supremacists, misogynists, or even this Trump supporter over here. But his editorial is symptomatic of the same underlying pathology. Evangelical elites are clearly as out of touch with the populist evangelical base as is the case in society in general. And lambasting populist evangelicals as hypocrites or dimwits will simply perpetuate the divide.

I don’t think Galli is calling anyone a hypocrite or a dimwit.  Nor is he accusing evangelicals of committing a “heinous sin” for supporting this president.  But I have witnessed a lot since Galli’s editorial appeared last night.  Today I saw Trump evangelicals on social media react positively, sometimes with great vigor, to Donald Trump’s Twitter attacks on CT.  I read CT editor Ted Olsen’s call for prayer in the wake of the hate mail and threats the magazine has received from pro-Trumpers.  I listened to Franklin Graham, a man with millions of followers in the evangelical community, claim that Galli’s piece does not contain even a kernel of truth.

All of this makes me wonder if it is Trueman who is out of touch. Earlier in his piece, Trueman says, “I live in the heart of Trump territory and know many who voted for the Donald, almost none of whom took any pleasure in doing so.” Yes, the folks he describes exist.  I have met many of them.  The 81% is a diverse group–men and women who pulled the Trump lever for a variety of reasons.  But Trueman fails to recognize, or at least underestimates, the millions of Trump evangelicals who go to MAGA rallies, think that the president is God’s anointed one, and believe that Trump’s policy on Israel will somehow hasten the return of Jesus.

Let’s not pretend that anti-intellectualism is not at work in the evangelical support for Donald Trump.  I have wrestled with the “evangelical elitism” critique for a long time.  As the product of a working-class family who pursued a Ph.D in American history and became part of the ivory tower, I bristle when people call me “elite.” All of my extended family are Trump supporters.  Like Trueman, I also live in the heart of Trump country.  I am forced to engage with pro-Trump neighbors in my largely lower-middle-class neighborhood and in my church.  As I wrote here yesterday, I have worked hard at being a translator.  I fail often.

But somewhere along the way we need to say, like Mark Galli did, that those who defend this president need to engage in a deeper level of Christian thinking. We need to acknowledge that there is a “scandal of the evangelical mind“and it helps explain why so many evangelicals voted for Donald Trump.  To quote Galli, we need to “call a spade a spade.”  And most importantly, we need to bring attention to the fact that the evangelical support of Donald Trump is hurting the witness of the Gospel.  After spending a year traveling with Believe Me: The Evangelical Road to Donald Trump, I have collected enough stories to believe that this is true.

If “evangelical elitist” means that I want to think deeply as a Christian about public life and challenge others–perhaps those of another social class–to do the same, then I gladly accept the label. I am, after all, an educator.  Smart evangelicals challenged me to worship God with my mind when I was a young, working-class, new convert to evangelicalism.  I listened to them and it changed my life.  It made me a better Christian.  When we challenge our fellow evangelicals in this way we must always do so with empathy, compassion, and love, but there are other times when such challenges must come in a Mark Galli-like prophetic voice.