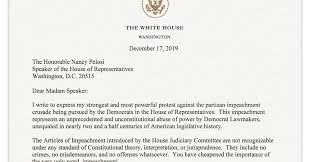 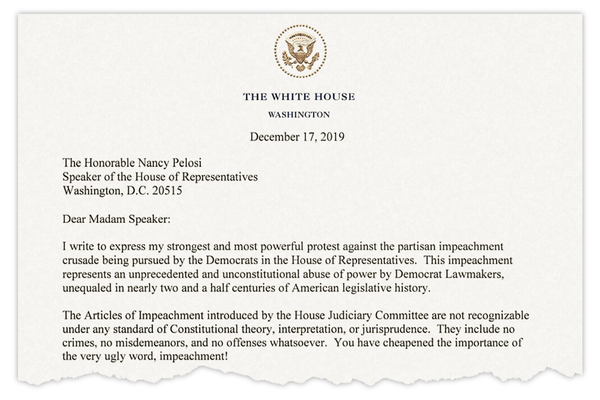 Last week we called your attention to Larison’s thoughts about impeachment.  Some of you may remember that he described the case for impeachment as “overwhelming.” (Larison, I might add, has a Ph.D in history from the University of Chicago).

Here is his take on the letter Trump wrote to Pelosi yesterday:

The president sent an unhinged letter to the Speaker of the House today to complain about his impending impeachment. The letter is an embarrassing display of insecurity, whining, and ignorance, and it serves only to underscore how unfit for the presidency Trump has always been. He stands accused of abuse of power, so like a petulant child he accuses everyone else of abusing their power.

The president condemns the House for impeaching him, which is to be expected, but his complaints are so excessive and ridiculous that it is fair to say that the president doth protest too much. He faults the House for its “unprecedented” action when the House has twice before impeached presidents and was very close to doing so on a third occasion before this. He whines that the House’s constitutional remedy for presidential wrongdoing is “unconstitutional.” When Trump declares something to be “unconstitutional,” he just means that it is something he doesn’t like. Impeachment is built into the Constitution, and it is there for occasions just such as these. His letter displays the same contempt for Congress that led him to refuse to cooperate with the House’s investigation.

Read the rest here.  You can read my take on the letter here.