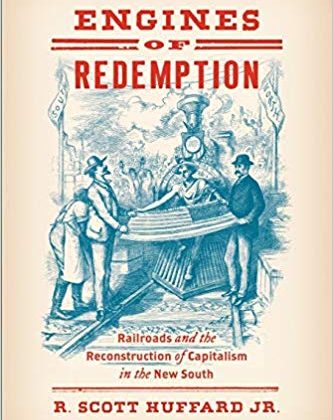 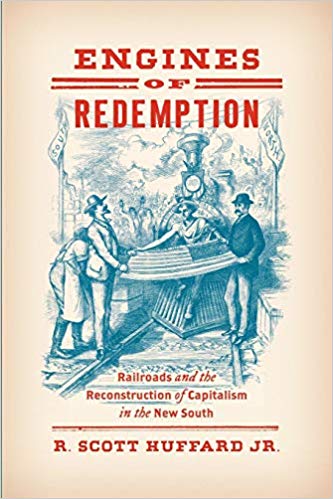 Scott Huffard is Program Coordinator of History and Associate Professor of History at Lees-McRae College. This interview is based on his new book, Engines of Redemption: Railroads and the Reconstruction of Capitalism in the New South (The University of North Carolina Press, 2019).

JF: What led you to write Engines of Redemption?

SH: The book had its roots in a graduate seminar at the University of Florida where I explored the spread of yellow fever along Florida’s rail lines in 1888. This led to more and more reading about the New South and it really seemed like there was a dark history of railroad disasters that had not really been told. While southern historians had already noted the importance of railroads in the rise of Jim Crow, I felt that other aspects of the South’s railroad experience needed to be explored.

I also was in grad school during the depths of the Great Recession and the issues I write about in the book–about the power of distant corporations, danger of new connections, and importance of narrative to capitalism–were everywhere. A book is inevitably shaped by the historical moment in which it was conceived and Engines of Redemption is no exception. For example, at the same time I was reading sources calling the Southern Railway an “octopus,” commentators were calling Goldman Sachs a “vampire squid.”

JF: In two sentences, what is the argument of Engines of Redemption?

SH: In the decades after the Civil War, the South was transformed by the expansion, standardization, and increased connectivity and circulation of the railroad network. Boosters used these new railroads to support the New South story, that capitalism redeemed the South, but this story obscured the ways in which the railroad and capitalism were uniquely destructive in the region.

JF: Why do we need to read Engines of Redemption?

SH: It helps re-center big business and capitalism as key forces in shaping the New South era and it implicates these forces in aiding the rise of white supremacy and many of the era’s disasters and crises. We have seen plenty of recent works (the “New History of Capitalism”) that argue for the capitalist nature of the Old South but Engines of Redemption extends this story into the late nineteenth-century. One of the more resilient aspects of capitalism is how it writes its own history and creates the narratives–like the New South story–that sustain it. We are in a historical moment where we can now more critically assess capitalism and its many disasters and the book hopes to contribute to these conversations and fold new characters and events into the history of capitalism. For example, I write how Railroad Bill, a black train robber active in Alabama in the 1890s, was a fearsome embodiment of the dangerous forces of capitalism for white southerners.

SH: My interest stretches all the way back to my elementary school years, when I became obsessed with the Civil War. I grew up in Pennsylvania and got really into the narrative of the war and the horrors of different battles. The idea of a war fought on American soil intrigued me and I remember always trying to get my family to stop at battlefields in Virginia while we were on the way to beach vacations. I saw the South as this foreign and haunted space and I think this fed into my desire to study the region (and its dark past) in graduate school. Now I like how the South has a way of challenging some of the myths and narratives we hold dear about America.

SH: I am working on a project that looks at the biography and legend of the railroad conductor Casey Jones. He ran the Illinois Central’s fastest mail train and died in a wreck in Mississippi while trying to make up lost time. He has since become perhaps the most famous conductor in America thanks to a whole host of ballads and songs. How did this conductor become the most famous railroad man in America and enter the pantheon of American folklore legends? It should be a fun project to work on and I am excited to jump into more research and writing.