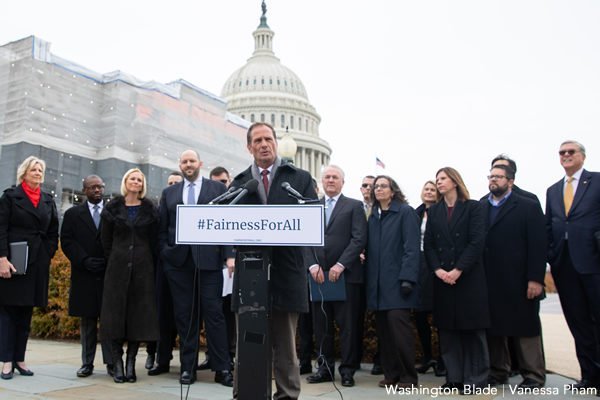 Yesterday Utah congressman Chris Stewart introduced the Fairness for All Act.  The bill would protect LGBTQ rights and religious liberty.  Fairness for All has the support of the Church of Latter Saints, the Council for Christian Colleges and Universities, and the National Association of Evangelicals.

Unlike the Equality Act, Fairness for All provides exemptions for religious organizations.

Here is a taste of Dan Silliman’s piece at Christianity Today:

Smith (sic) proposes the Fairness for All Act in Congress Friday. Advocates of the idea of finding common ground for religious liberty and LGBT rights, led by the Council for Christian Colleges and Universities (CCCU), have spent three years planning, discussing, and strategizing for this moment.

The law would prohibit anti-LGBT discrimination in employment, housing, and places of public accommodation, including retail stores, banks, and health care service providers. Currently, under federal law and in the majority of states, LGBT people can be evicted from rental property, denied loans, denied medical care, fired from their jobs, and turned away from businesses because of their sexual orientation.

The Fairness for All law would offer LGBT people substantially the same protections as the proposed Equality Act, a bill LGBT advocates have long promoted and Democrats in the House passed earlier this year, only to see it stall in the Senate. The Equality Act, however, includes no exemptions for religious organizations.

“The Equality Act was written in such a way that a religious person like myself couldn’t vote for it,” said Stewart, who is a member of the Church of Jesus Christ of Latter-day Saints. “[Democratic legislators] wrote it so that they could say to LGBT people, ‘No Republican voted for it; they don’t care about people like you,’ which just isn’t true.”

The Fairness for All Act exempts religious groups—both churches and nonprofits—from the anti-discrimination rules. Churches wouldn’t be required to host same-sex weddings. Christian schools wouldn’t have to hire LGBT people. Adoption agencies could receive federal funding even if they turned away same-sex couples looking to raise children. The law would also protect the tax-exempt status of religious groups that condemn homosexuality.

The anti-discrimination rules would not apply to for-profit businesses with 14 or fewer employes, excluding them from the definition of “public accomodation.” This would mean small-business owners such as the Colorado baker who refused to make a wedding cake for a same-sex ceremony in 2012 would have the right to refuse service on religious grounds.

Leaders from more than 90 evangelical groups signed a statement rejecting any legislation protecting sexual orientation or gender identity after the CCCU started to advocate for a Fairness for All law in 2016. The list of signers included The Gospel Coalition president D. A. Carson, Focus on the Family president Jim Daly, First Things editor R. R. Reno, and Southern Baptist leaders Russell Moore and Al Mohler.

“Christians cannot support [Fairness for All] for this overarching reason: It is grounded in an unbiblical conception of the human person,” Owen Strachan, director of the Center for Public Theology at Midwestern Seminary, wrote in September. “The Scripture will not allow us to see any ungodly ‘orientation’ or ‘identity’ as essential to our humanity, as directed toward our flourishing, and thus enshrined in law as a protected category.”

Others evangelical leaders, however, including pastor Tim Keller, legal scholar John Inazu, and CT editor in chief Mark Galli, have argued that a both/and approach is possible. The Fairness for All idea has also received support from some legal scholars, and it has been endorsed by the Seventh-day Adventist Church and the Church of Jesus Christ of Latter-day Saints. A similar law has been enacted in Utah, with the support of the LDS church.

The “similar law” Silliman mentions is the so-called “Utah Compromise.”

A piece at Deseret News by Kesley Dallas and Matthew Brown is also worth a read.

I believe in religious liberty for institutions that uphold traditional views of marriage. I believe that all human beings in a democratic society should have basic civil rights regardless of sexual orientation.  (If I read Owen Strachan correctly, he seems to believe that a person somehow loses his or her dignity as a human being if they are gay.  And based on this belief, Strachan does not believe that LGBTQ men and women deserve civil rights in a democratic society).

Fairness for All represents the kind of political compromise necessary to sustain a robust pluralist society.  I support it.