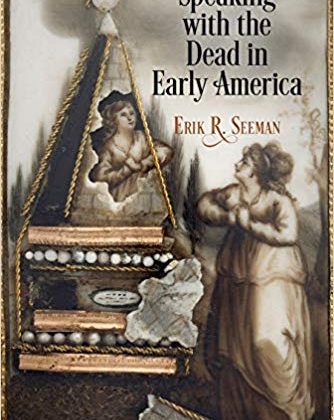 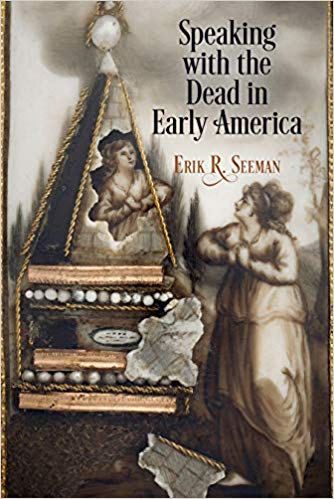 Erik Seeman is Professor of History and History Department Chair at the University at Buffalo. This interview is based on his new book, Speaking with the Dead in Early America (University of Pennsylvania Press, 2019).

JF: What led you to write Speaking with the Dead?

ES: In my large lecture class, “Death in America,” Spiritualism is one of my students’ favorite topics. I had long wondered how a religious movement with such a specific starting point–the Fox Sisters’ communication with a ghost in 1848–could claim “millions” of adherents within a decade (leave aside for a moment that the claim was likely exaggerated).

So I started Speaking with the Dead with a simple question: Where did Spiritualism come from? But I quickly became dissatisfied with previous historians’ answers, which had focused on relatively marginal movements in the 1830s and 1840s: Shakerism, Mesmerism, Swedenborgianism. The deeper I dug, the more I found examples of people imagining communication with the dead, not only in the nineteenth century, but going back to the Protestant Reformation in sixteenth-century England.

JF: In two sentences, what is the argument of Speaking with the Dead?

ES: Protestantism is a religion in which the dead play a central role. From the Reformation forward, many Protestants have maintained relationships with the dead, a tendency that increased over time and culminated in what I call the antebellum cult of the dead.

JF: Why do we need to read Speaking with the Dead?

ES: Historians have long insisted – as in one recent account of the Reformation – that “Protestantism stripped religion of mediation and intimacy with the dead.” Speaking with the Dead offers countless examples from historical, literary, and material culture sources to demonstrate that such assertions must be revised.

To use categories formulated by the religious studies scholar Robert Orsi, historians have usually conceived of Protestantism as a religion of “absence,” in contrast to Catholicism, which is seen as a religion of the “presence” of supernatural beings other than God and Christ (saints, deceased loved ones, the Virgin Mary). In my account, Protestantism is very much a religion of presence.

ES: I went to college “in Boston” (as Harvard grads like to say, evasively). I was a History major but not at all on a path toward becoming a historian, until I started primary source research for my junior-year paper, sort of a mini-thesis. I started taking the T and the commuter rail to the Mass Archives at Columbia Point and the Essex County Courthouse in Salem. I couldn’t believe they handed over stacks of eighteenth-century wills and inventories and letters to an untested twenty-year-old. The next year I continued my research on the social history of the Great Awakening, expanded my geographic compass, and spent so much time in the archives that I got a D on my Icelandic Saga midterm. At that point I asked my Teaching Fellow, Mark Peterson, “How do I do what you do?”

ES: Continuing the Boston theme, I’ve just started a book I’m calling “The Pox of 1721: Boston’s Deadliest Epidemic.” It’s going to be a social history of the sort I started writing as an undergrad. This is the smallpox epidemic famous for the “inoculation controversy”: Cotton Mather and Zabdiel Boylston favored the new (or new to Euro-Americans) practice of inoculation, while William Douglass and others strongly opposed it. This controversy left an ample published record that has drawn lots of scholarly attention. But what about ordinary people? How did this epidemic play out among the unfree as well as the free, the poor as well as the well-to-do? We’ll see if I’m able to unearth enough sources to tell that story.