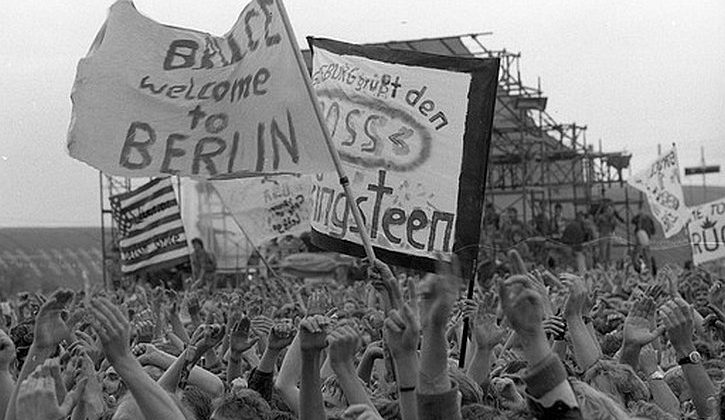 Here is Erik Kirschbaum’s piece at the Los Angeles Times:

Springsteen’s July 19, 1988, concert, the largest in East German history, reflected the growing thirst for freedom of young people inside East Germany, which, unlike other Eastern European countries warming to Soviet leader Mikhail Gorbachev’s reforms, had continued to clamp down on its citizens.

Some 160,000 managed to get tickets to see the Boss, but more than 100,000 stormed the gates, Woodstock style, shortly before the show — an astonishing act of defiance at a time when East German police still routinely used force.

“The show in East Berlin was a major moment for us…. It was one of our greatest shows,” Springsteen said in an interview with German TV network WDR in 2016. “It was just the stakes involved. The band tends to play well when the stakes are very high. We knew going into East Berlin at that time that we were rolling the dice quite a bit. And then the amount of people that showed up … it was an epic evening for us. It just seemed like a very important show to play….”

But Springsteen decided he would try to set the record straight about his motive with a short, powerful speech in German, which he had scrawled on a piece of paper: “I’m not here for or against any government. I’ve come to play rock ’n’ roll for you in the hope that one day all the barriers will be torn down.”

The crowd erupted in joy, fully understanding Springsteen’s reference. Some later said that it was a message they had been waiting their whole lives to hear.