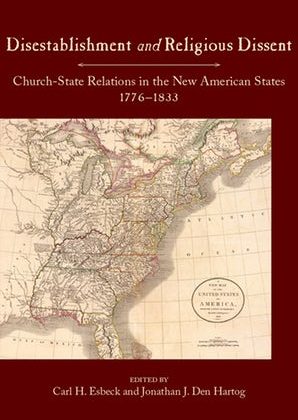 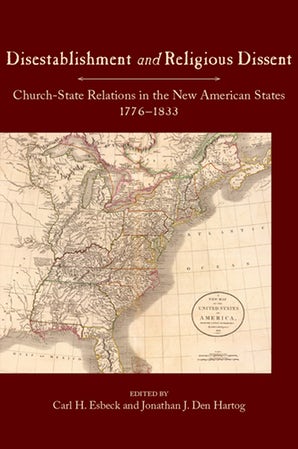 I am glad to see the release of Disestablishment and Religious Dissent: Church-State Relations in the New American States, 1776-1833. Carl Esbeck of the University of Missouri and Jonathan Den Hartog of Samford University have edited a very useful book for anyone interested in the relationship between church and state in early America.  Authors include Evan Haefeli, James Kabala, Shelby Balik Kyle Bulthuis, Brian Franklin, and John Witte.  By the way, some guy from Messiah College who has a blog wrote the essay on New Jersey.

Over at the Age of Revolution blog, Den Hartog introduces us to the themes of the book.  Here is a taste:

The American Revolution came about through a sequence of fractures in the ties between the colonies and Great Britain. One of those fractures arose from an important call from the Continental Congress. On May 15, 1776, Congress approved a resolution urging each of the colonies “to adopt such government as shall, in the opinion of the representatives of the people, best conduce to the happiness and safety of their constituents in particular, and America in general.”[1] This invitation immediately called into question the charters and habits under which the colonies had been operating in a British constitutional and legal regime. It thereby forced the new states to question and modify long-standing arrangements, potentially transforming many aspects of American life.

One key element of those reconsiderations was the public place of religion for the states. In 1776, various forms of church establishment stretched from Georgia and South Carolina to Massachusetts and New Hampshire. Although “establishment” has often been used to mean financial support for the official church, in reality, these establishments often connected with many other aspects of colonial life, property holding, and governance.[2] It was in the states that Americans experienced the most issues around “church and state.” The states thus provide the best location in which to examine how Americans pursued religious liberty in a revolutionary moment. Although much ink has been spilled about the First Amendment, even more significant change occurred at the state level.

The process of religious disestablishment in the states provides a fascinating story in political and legal innovation. It transformed conceptions of ties between religion and politics, religion and the law, and the citizen’s relationships and duties. It produced a unique American model of religious liberty for all, voluntary support of the churches, and non-sectarianisn (non-preferentialism) in governmental approaches to denominations. It’s a story that needs to be told.

In order to examine religious disestablishment at the state level, Carl Esbeck and I recently co-edited a volume entitled Disestablishment and Religious Dissent: Church-State Relations in the American States, 1776-1833(University of Missouri Press, forthcoming November 2019). We recruited twenty-one scholars to analyze how establishment and disestablishment operated at the state level. These scholars—historians, political scientists, and legal experts—brought their distinctive insights, as they each took up one specific state. The range of investigation took in the original thirteen states, along with other early-admitted states such as Vermont, Kentucky, and Tennessee. Contributors also examined the special cases of Ohio (admitted from the Northwest Territory), Louisiana and Missouri (additions from the Louisiana Purchase), Maine (carved out of Massachusetts), and Florida (gained from Catholic Spain).

Read the entire piece here and then buy this book for your personal and university library.