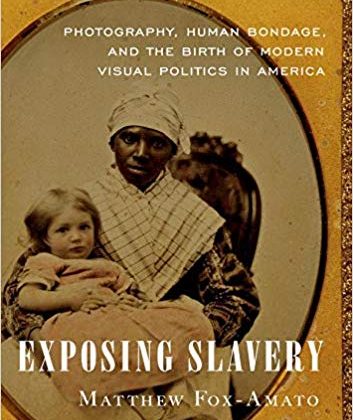 Matthew Fox-Amato is Assistant Professor of History at the University of Idaho. This interview is based on his new book, Exposing Slavery: Photography, Human Bondage, and the Birth of Modern Visual Politics in America (Oxford University Press, 2019).

JF: What led you to write Exposing Slavery?

MFA: I was (and still am) interested in how social movements have used the power of culture to effect change. I also wanted to better understand the role that images of suffering have played in shaping modern experience and, more specifically, American politics. Initially, a project about abolitionist photography seemed the way to pursue these interests. I was aware of the many photos of Frederick Douglass and Sojourner Truth as well as certain images that abolitionists circulated during the Civil War, such as the “Scourged Back” (1863), in which a fugitive slave poses with his flagellated back towards the camera. My plan was to examine how abolitionists drew upon this new visual technology to fight racism and expose the violence of bondage.

But the project changed as I began finding evidence in the slave South. I came across a few digitized photographs, commissioned by enslavers, of enslaved people in the 1850s. I found written sources suggesting enslaved people actively engaged the medium, as in, for instance, a newspaper article about African Americans purchasing photographs from an itinerant daguerreotypist in a small town in Alabama. These and other sources led me to revise how I was conceptualizing antebellum photography. The medium was more than simply a tool for abolitionists: it served as a cultural middle-ground, through which various historical actors–in both the North and South–made claims about themselves and the world. How, I now asked, did photography influence the culture and politics of slavery? And how was the medium shaped in the process? My book aims to answer these questions.

JF: In two sentences, what is the argument of Exposing Slavery?

MFA: Photography exacerbated the political crisis over slavery. In turn, those most invested in the potential futures of slavery–enslavers, enslaved people, abolitionists, and Civil War soldiers–turned photography into a political tool.

JF: Why do we need to read Exposing Slavery?

MFA: It is abundantly clear that the digital world has reshaped the intertwined relationship between media and U.S. politics–whether one looks to changes in newspapers or the influence of platforms like Facebook and Twitter. To make sense of these changes, we need a more textured understanding of how media have shaped politics in the past. My point in Exposing Slavery is not that the emergence of photography simply helped promote freedom and equality and diminished anti-black racism. It is, instead, that photography catalyzed conflict, because actors from across the political spectrum seized on it for different political goals–much like we see with social media today.

I also want readers to come away with a new approach for conceptualizing historical actors. Exposing Slavery puts visual culture at the center of American history in a very specific way. Not only does it analyze images as evidence (rather than simply illustrations), but it also foregrounds how non-artists helped produce images and delves into the ways in which they circulated, displayed, and gazed upon those images. I show, for instance, how some enslaved people preserved photographic portraits of their loved ones, a practice that enabled them to maintain familial ties amidst the disruptions of the domestic slave trade. Likewise, I reveal how white Union soldiers helped craft interracial scenes during the Civil War. These images, which routinely pictured black men kneeling beneath and serving white soldiers, reinforced racial hierarchy as slavery crumbled. These and other instances demonstrate how non-artists shaped history through photography. We see the past anew once we begin to grapple with the many consequential ways that ordinary historical actors (not just trained artists) have used and made meaning from images.

MFA: I was riveted by my first serious work in an historical archive. When I was writing my undergraduate thesis about the Hollywood Production Code (film censorship enacted in the 1930s), I spent time at the Margaret Herrick Library in LA, poring over letters between Code executives and studio producers. I was captivated by the letters I read–documents full of conversation about what should be kept, altered, and cut in various film scripts. I felt like I had a front-row seat to the creation of popular culture, and was struck by the idea that my thesis would be dramatically shaped by the questions I asked about these sources. It was in this moment that I knew I wanted to study the past for a living.

MFA: I’m beginning a new book-length study about the historical relationship between visual journalism and the White House. The project examines how sketch artists and photojournalists have visualized the presidency, and how administrations began to create and disseminate their own news pictures. I’m fascinated by connections between visual media and the uneven development of democracy. This book explores one part of that larger story.