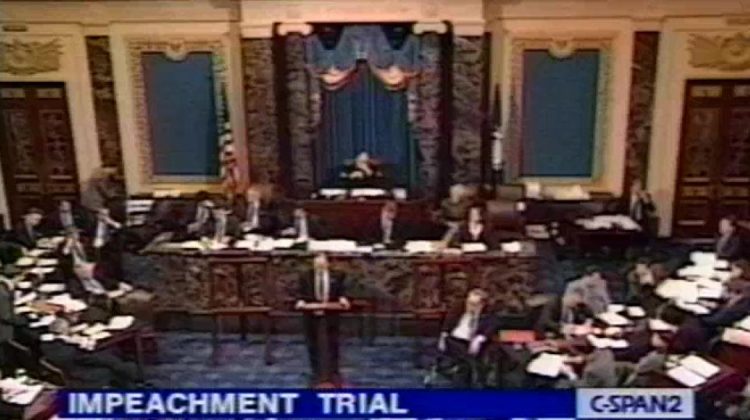 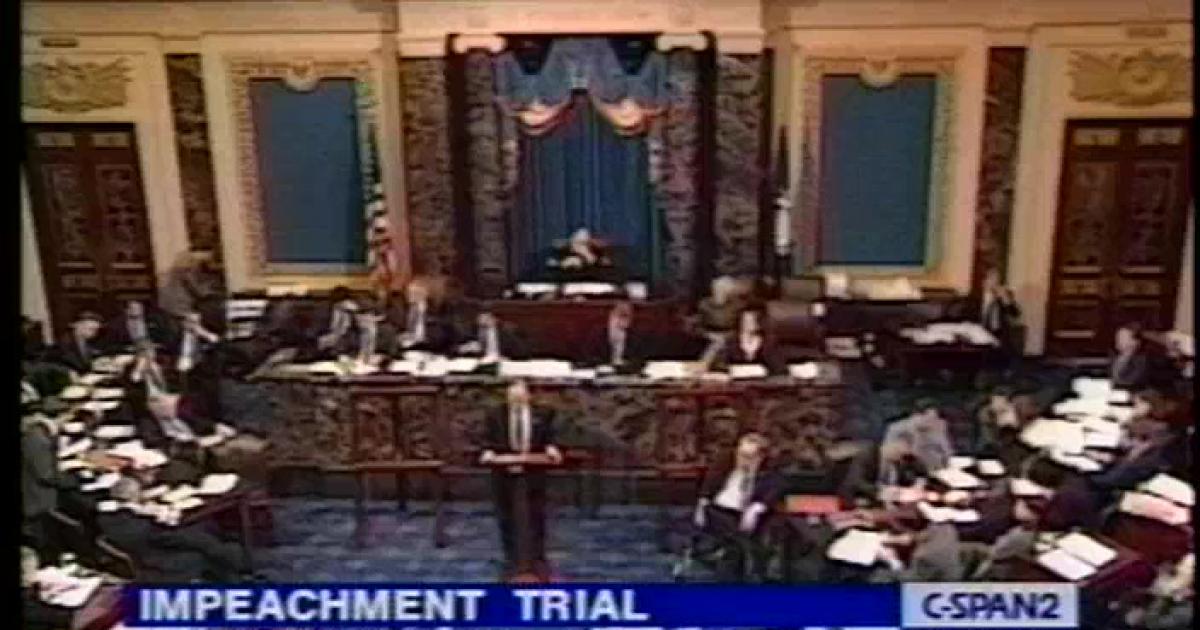 Harvard historian Jill Lepore asks this question at The New Yorker.  Here is a taste:

Bird-eyed Aaron Burr was wanted for murder in two states when he presided over the impeachment trial of Supreme Court Justice Samuel Chase in the Senate, in 1805. The House had impeached Chase, a Marylander, on seven articles of misconduct and one article of rudeness. Burr had been indicted in New Jersey, where, according to the indictment, “not having the fear of God before his eyes but being moved and seduced by the instigation of the Devil,” he’d killed Alexander Hamilton, the former Secretary of the Treasury, in a duel. Because Hamilton, who was shot in the belly, died in New York, Burr had been indicted there, too. Still, the Senate met in Washington, and, until Burr’s term expired, he held the title of Vice-President of the United States.

The public loves an impeachment, until the public hates an impeachment. For the occasion of Chase’s impeachment trial, a special gallery for lady spectators had been built at the back of the Senate chamber. Burr, a Republican, presided over a Senate of twenty-five Republicans and nine Federalists, who sat, to either side of him, on two rows of crimson cloth-covered benches. They faced three rows of green cloth-covered benches occupied by members of the House of Representatives, Supreme Court Justices, and President Thomas Jefferson’s Cabinet. The House managers (the impeachment-trial equivalent of prosecutors), led by the Virginian John Randolph, sat at a table covered with blue cloth; at another blue table sat Chase and his lawyers, led by the red-faced Maryland attorney general, Luther Martin, a man so steady of heart and clear of mind that in 1787 he’d walked out of the Constitutional Convention, and refused to sign the Constitution, after objecting that its countenancing of slavery was “inconsistent with the principles of the Revolution and dishonorable to the American character.” Luther (Brandybottle) Martin had a weakness for liquor. This did not impair him. As a wise historian once remarked, Martin “knew more law drunk than the managers did sober.”

Impeachment is an ancient relic, a rusty legal instrument and political weapon first wielded by the English Parliament, in 1376, to wrest power from the King by charging his ministers with abuses of power, convicting them, removing them from office, and throwing them in prison. Some four hundred years later, impeachment had all but vanished from English practice when American delegates to the Constitutional Convention provided for it in Article II, Section 4: “The President, Vice President and all civil Officers of the United States, shall be removed from Office on Impeachment for, and Conviction of, Treason, Bribery, or other high Crimes and Misdemeanors.”

It’s one thing to know this power exists. It’s another to use it. In one view, nicely expressed by an English solicitor general in 1691, “The power of impeachment ought to be, like Goliath’s sword, kept in the temple, and not used but on great occasions.” Yet this autumn, in the third year of the Presidency of Donald J. Trump, House Democrats have unsheathed that terrible, mighty sword. Has time dulled its blade?