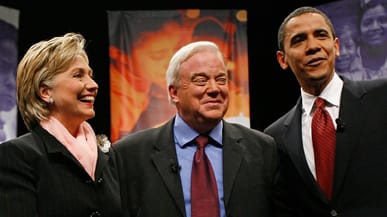 Jim Wallis, the progressive evangelical leader of Sojourners, recently said in an interview with Publishers Weekly that Donald Trump “is operating in the spirit of anti-Christ.” (Wallis was discussing the themes of his new book Christ in Crisis : Why We Need to Reclaim Jesus).

I like Jim Wallis. I have never met him, but over the past two decades I have heard him speak at Messiah College.  I agree with him on many social issues and I share his evangelical faith.  I have written for Sojourners magazine.

At times, however, I think Wallis falls into the trap of mixing religion and politics.  Too often he wants to merely replace the power of the Christian Right with the power of the Christian Left.  I tend to follow University of Virginia sociologist James Davison Hunter on this point.  Check out his chapter on the evangelical left in To Change the World: The Irony, Tragedy, & Possibility of Christianity in the Late Modern World.  A taste:

When [Wallis] accuses Falwell and Robertson of being “theocrats who desire their religious agenda to be enforced through the power of the state,’ he established the criteria by which he and other politically progressive Christians are judged the same.  In its commitment to social change through politics and politically oriented social movements, in its conflation of the public with the political, in its own selective use of scripture to justify political interests, and in its confusion  of theology with national interests and identity, the Christian  Left (not least the Evangelical Left) imitates the Christian Right.  The message is obviously different, their organizational scale and popular appeal are different, and their access to media outlets are different, but in their framework, method, and style of engagement , politically progressive Christians are very similar to their politically conservative counterparts.

There is another point of similarity.  It is found in their relationship with the party system and the Democratic Party in particular.  With all sincerity, they aspire to broaden and deepen the values people bring to the political process.  But influence is never unidirectional in any relationship.  Given the resources of the Democratic Party and the special interests that drive it, there is little question that progressive Christianity is instrumentalized (or used as a means to an end) by the Democratic Party in its quest for power, just as conservative Christianity has been used for quite some time by the Republican Party. (p.147-148).

Over at The Anxious Bench, David Swartz, a historian of progressive evangelicals, shows us that Wallis’s strong criticism of Trump is fitting with much of his career as an evangelical activist.  Here is a taste of his piece:

It’s hard not to notice similarities in style between these radical evangelicals and the religious right. Both groups blurred lines between faith and politics. Indeed, this was precisely the point—to tie the sacred to the temporal so closely that the two were indistinguishable. Did Wallis and his comrades, who moved so contentiously into politics nearly a decade before the Reagan revolution, prefigure the political style of the religious right?

That’s probably going too far, but it does seem clear that Wallis’s most recent invocation of the anti-Christ is not a promotional ploy. It is an authentic and deeply grounded application of a profoundly felt theology that has been with him since the 1960s. It’s an attempt, as he notes in his twelfth book Christ in Crisis: Why We Need to Reclaim Jesus, to ensure that “one’s identity in Christ precedes every other identity.”

Wallis’s rise to prominence was smoothed by his willingness to tamp down Manichean language. But during times of crisis—Watergate in the early 1970s, the rise of the religious right and the Reagan Revolution in the 1980s, and the Iraq War debacle and Islamophobia in the early 2000s—this more radical strain resurfaces. As Trump and white evangelicalism combine and self-destruct, there’s no question that we’re in another such moment now.