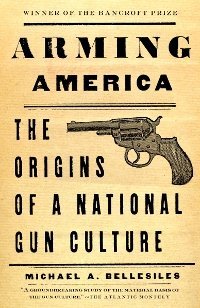 Twenty years ago an Emory University history professor named Michael Bellesiles published a book arguing that early Americans were not all that interested in guns until after the Civil War.  The book, Arming America: The Origins of a National Gun Culture, won the prestigious Bancroft Prize, but the prize was revoked when gun rights advocates and others challenged Bellesiles’s scholarship.  Bellesiles eventually resigned his post at Emory.  Today he works as a bartender and writes history.  His most recent work is A People’s History of the U.S. Military.

Over at The Week, Bill Black reflects on the Arming America controversy.  Here is a taste:

Arming America was published in 2000 to much acclaim. Historian Peter Onuf (later a founding co-host of the BackStorypodcast) called it a “myth-busting tour de force,” while a former president of the Organization of American Historians said it was “a classic work of significant scholarship with inescapable policy implications.”

The “policy implications” of Arming America were with respect to the Second Amendment. If, as Bellesiles claimed, individual gun ownership was not a significant part of American life when the Constitution was written, then it becomes harder to argue that the Constitution’s drafters were especially interested in protecting gun ownership as an individual civil right. The “right of the people to keep and bear Arms” looks more like a restatement of their right to “a well regulated Militia,” not a separate individualist claim.

This was a potent talking point in 2000. The Columbine High School massacre had occurred the year before and spurred a fierce national debate over gun rights; Arming America was quickly swallowed up in that debate. NRA president Charlton Heston lambasted the book’s argument as “ludicrous.” Bellesiles began receiving death threats and anonymous phone calls. Gun enthusiast message boards scrutinized every footnote in the book and began finding discrepancies.

More worryingly (from academia’s point of view), serious scholars began finding discrepancies too. Bellesiles claimed to have looked at more than 11,000 probate records; however, his footnotes did not specify how many records were from which county or from which time period. Bellesiles didsay he looked at 186 inventories in Providence, Rhode Island, where he claimed only 48 percent of the estates had guns and more than half of those guns were old or of poor quality; but the legal scholars James Lindgren and Justin Heather looked at the extant inventories (only 149, they said) from early Providence and found 63 percent of the estates listed guns, only one-tenth of them in poor condition. Bellesiles also claimed to have looked at hundreds of inventories from 1850s San Francisco, when San Francisco’s records had all been destroyed by the great earthquake and fire of 1906.

In the face of these criticisms, especially a William and Mary Quarterlyforum in which other historians called Bellesiles’s work “biased,” “careless,” and “misleading,” Emory University appointed a special committee in 2002 to investigate the charges against Bellesiles. They found it hard to check a lot of his research, because rather than building a proper database for the 11,000 probates, he had instead taken handwritten notes on legal pads — which were almost entirely destroyed when a pipe burst in Emory’s Bowden Hall, flooding his office. As for the mysterious San Francisco records, Bellesiles explained he had actually used records from nearby Contra Costa County; the committee, however, had reason to doubt he had visited the Contra Costa archive when he said he did.

The special committee ruled that Bellesiles had fallen short of the American Historical Association’s standards for professional scholarship. Bellesiles resigned his post at Emory. His Bancroft Prize, which he had won the year before, was rescinded — what he now says was, “after the death of my mother, the worst moment of my life.”