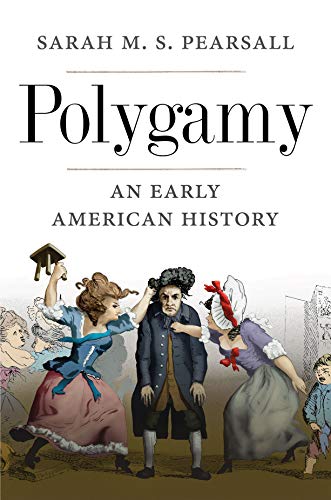 Sarah Pearsall is University Senior Lecturer in the History of Early America and the Atlantic World at the University of Cambridge. This interview is based on her new book, Polygamy: An Early American History (Yale University Press, 2019).

JF: What led you to write Polygamy?

SP: When I started working on this project, fierce debates over same-sex marriage erupted at the center of U.S. politics, and marriage controversies also kept emerging in my research and teaching. In the course of research on my first book about Anglo-Atlantic families, I started to notice a negative version of the ideal marriage: the harem, supposedly ruled only by lust, greed, and fear, never true love. In an undergraduate course I was teaching on early American travel narratives, depictions of polygamy appeared over and over again. Why were people so fascinated—and sometimes so horrified— by other people marrying in what they felt was the wrong way? What did differences over marriage highlight about society and politics? Polygamy seemed a good way to open up these vexing issues. Yet I could find few books about it, and none focused on colonial America. With a few notable exceptions, most studies of early American colonialism treated disputes over polygamy as something like mere local color in the background of a borderlands drama. Yet sometimes different ideas about households were not the backdrop; they were the drama. I wanted to know more about this drama, and the women and men who shaped it.

JF: In two sentences, what is the argument of Polygamy?

SP: Most Americans, even (early) American historians, presume the history of polygamy in North America only really began with Western controversies surrounding the Church of Jesus Christ of Latter-day Saints (Mormons) in the nineteenth century. In fact, I argue that what happened to the Mormons was near the end, a decisive battle in a long-standing war for monogamy which reveals a great deal about women, men, households, and power in early modern encounters.

JF: Why do we need to read Polygamy?

SP: This book places women and men, and their intimate, sometimes physical, relations, at the center of an analysis of colonialism and nationhood. This somewhat unusual perspective yields some compelling surprises and fascinating stories. Many of the major actors in this narrative were Native American or African American. I hope that the book prompts readers to question their own assumptions about this allegedly “backwards” form of marriage. Even more significant, though, is that readers take away that centering marriage changes how we think about major events and processes, including the Pueblo Revolt (which I first discussed in an article in the American Historical Review), King Philip’s War, and even the American Revolution. The book ranges widely but deeply across many times and places, so even specialists should learn something new. Finally, one friend jokingly suggested that displaying a copy would make the reader look hip and attractive, but I could not possibly comment on that.

SP: Strangely, I became an American historian when I left the United States and went to study in England. I came to Cambridge University as a master’s student to study British history. While there, I increasingly felt the pull of early American history. An exceptional high school teacher, Melinda Hennessey, as well as many amazing teachers at Yale had already ignited my passion for history. I was fortunate to be able to return to the U.S. to do my PhD in early American history at Harvard with Laurel Thatcher Ulrich, with a strong interest in British and Atlantic history. My first book reflects those joint interests. In the end, I fell in love with early American history because it is at once familiar and alien. It also involves so many rich and dynamic encounters between different people; for better or worse, these contacts continue to shape our world. I hope my new book gives a flavor of them.

SP: I have enjoyed working on this topic so much that I am now writing a global history of polygamy with a long temporal span. I also have a project on the American Revolution in the works, as well as one on slavery and marriage.