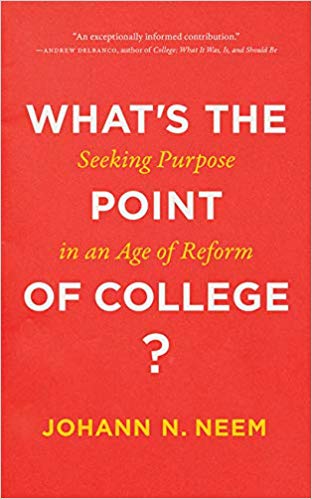 Today we recorded Episode 54 of The Way of Improvement Leads Home Podcast.

Our guest was Western Washington historian Johann Neem, author of What’s the Point of College: Seeking Purpose in an Age of Reform.  I don’t want to give too much away because I want you to listen to our conversation,  but let me offer a teaser.  At one point during the interview I asked Neem about his passage from his book:

…forward-looking companies try to emulate traditional colleges by building large, idyllic campuses where people can interact and be creative. “There is something magical about sharing meals,” said former Google CFO Patrick Pichette on why Google discourages telecommuting. “There is something magical about spending the time together, about noodling on ideas, about asking at the computer, ‘What do you think of this?'”  That sounds a lot like the traditional college experience, but, in new model universities, fundamental aspects of traditional ones–such as personalized teaching, green lawns, academic freedom, shared governance, meaningful exposure to the liberal arts and sciences, and time and autonomy for reflection–are deemed irrelevant.

As Silicon Valley tries to promote face-to-face interaction in real places that resemble the traditional college campus, universities seem to be moving away from such a model through its increasing commitment to displaced online education and a delivery system that makes human connection more difficult.

See how Neem developed his thoughts in Episode 54.  It will drop in a week or so.  Stay tuned.