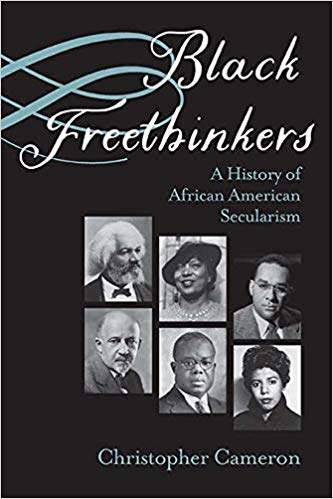 Christopher Cameron is Associate Professor of History at the University of North Carolina–Charlotte. This interview is based on his new book, Black Freethinkers: A History of African American Secularism (Northwestern University Press, 2019).

JF: What led you to write Black Freethinkers?

CC: Like countless scholars of African American religion, I began this project after reading Al Raboteau’s classic book Slave Religion. Toward the end of the work, he mentions that not all slaves “too solace in religion” and some could not believe in a just and all-powerful God who would allow his people to suffer under slavery. Raboteau’s discussion of atheism and agnosticism occupies just two pages yet was incredibly intriguing to me, as I’d encountered no other historians who explored religious skepticism in nineteenth century slave communities. This discovery led me to begin searching for examples of black freethinkers, both in the era of slavery and in the twentieth century, and what I found convinced me that black freethought was much more prevalent and important than scholars have realized.

JF: In two sentences, what is the argument of Black Freethinkers?

CC: African American freethought began as a response to the brutality of the institution of slavery and developed in tandem with movements such as the New Negro Renaissance and Black Power. While freethinkers have constituted a small segment of the black population, they have nevertheless played critical roles in African American intellectual and political life since the mid-19th century.

JF: Why do we need to read Black Freethinkers?

CC: Probably the most common response I get when discussing this book with people is “I didn’t know that person was a freethinker.” This is the case when discussing lesser-known figures such as Louise Thompson Patterson or more well-known freethinkers such as Richard Wright and Zora Neale Hurston. Black Freethinkers demonstrates that religious skepticism was prevalent among some of the most prominent voices in African American history, including Frederick Douglass, W.E.B. Du Bois, A. Phillip Randolph, Richard Wright, James Baldwin, Lorraine Hansberry, and Huey Newton. And these were not simply intellectuals and political activists who happened to be freethinkers but rather people whose political ideology/activism and literary production were profoundly shaped by their religious skepticism. Black Freethinkers thus helps us to more fully understand the intersections between religion and African American literary, intellectual, and political history, especially in the twentieth century.

JF: Tell me a little about your research and sources for the book.

CC: Following up on the discussion of atheism among slaves in Raboteau’s book, I began the research for Black Freethinkers by reading dozens of slave narratives. While historians have used these sources to document various aspects of slave religiosity, they are also useful sources to document the presence of religious skepticism in southern slave communities. For later chapters of the book, novels, poetry, memoirs, newspapers and other periodicals were key sources. I likewise found archival sources such as letters, unpublished memoirs, sermons, and records of liberal congregations such as the Harlem Unitarian Church to be incredibly valuable in writing the book.

CC: I have two projects in the works right now. One is an edited collection (with Phillip Luke Sinitiere) entitled Race, Religion, and Black Lives Matter: Essays on a Moment and a Movement. The second is a monograph entitled Liberal Religion and Race in America that explores African Americans engagement with liberal sects such as the Unitarians and Universalists from the revolutionary era to the creation of Black Lives of Unitarian Universalism in 2015.