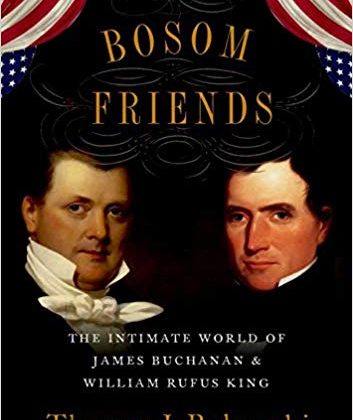 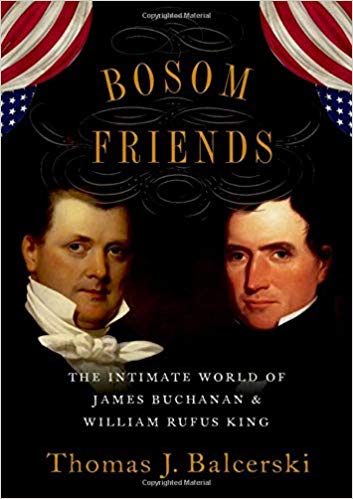 Thomas J. Balcerski is Assistant Professor of History at Eastern Connecticut State University.  This is interview is based on his new book Bosom Friends: The Intimate World of James Buchanan and William Rufus King (Oxford University Press, 2019).

JF: What led you to write Bosom Friends?

TB: Bosom Friends began as the first chapter of my dissertation at Cornell University. One of my central research questions since graduate school has been the role of bachelors, and more generally the unmarried, in U.S. politics before the Civil War. From bachelors, I came to the historical category of friendship, about which I wrote my first article, published in Pennsylvania History in 2013. In the dissertation, I looked at several examples of intimate male friendships in the antebellum period, but for the book, I decided to dig deeper into the relationship of James Buchanan of Pennsylvania and William Rufus King of Alabama. Given that the focus had shifted from a range of actors to just two individuals, I decided to write the book as a dual biography.

Famously, James Buchanan is our only bachelor president (or more properly, the only president never to marry, since Grover Cleveland was elected a bachelor in 1884). Less well known to history is William Rufus King, who was elected vice president under Franklin Pierce in 1852. King is perhaps most widely remembered for being the only president or vice president ever inaugurated outside the United States, having done so on his deathbed in Matanzas, Cuba. The pair, Buchanan and King, served together in the U.S. Senate from 1834 to 1844, during which time they often lived together. From there, the bosom friends separated, but their correspondence increased, which reveals a portrait of two Democratic bachelor politicians striving to obtain power. While both men lived, they wanted nothing more than to unite the North and the South in a bachelor ticket; however, it did not come to pass.

JF: In 2 sentences, what is the argument of Bosom Friends?

TB: My book argues that an intimate male friendship shaped the political and personal lives of James Buchanan of Pennsylvania and William Rufus King of Alabama. I reveal the many intricacies of their conjoined lives and, in the process, help to clear up much misinformation about the pair.

JF: Why do we need to read Bosom Friends?

TB: The relationship of James Buchanan and William Rufus King is interesting both in a historical and historiographic sense. I find it fascinating how interpretations, both among academics and the general public, have changed about the pair. There’s no getting around the fact that, today, most people assume that they were gay and, further still, that they shared a sexual relationship. My book takes a different approach, as I read the evidence more carefully within the historical context of intimacy in nineteenth century America. For this reason, readers can expect a reassessment of what they think they know about manhood, friendship, sexuality, and politics in the era before the Civil War.

TB: I credit an excellent high school teacher for my initial interest in American history. My class read Thomas Bailey’s American Pageant, and I was hooked. The narrative style, the memorable descriptions (John Adams as “frosty” lingers in my memory), and the idea that the past, somehow, actually mattered to the present made their impression upon me. I have always enjoyed the ebb and flow of the antebellum period—I like the contingency of events, the colorful characters who populated David Potter’s The Impending Crisis, and the sense that maybe, just maybe, the war could have been prevented. Beyond the graduate training that I received at SUNY Stony Brook and Cornell University, I realized that those initial passions for the causes of the Civil War are like a deep reservoir of historical research to which I come back to again and again.

TB: I am currently working on a history of the Democratic Party from its early origins in the Federalist era to its unraveling in the 1920s. Tentatively titled “The Party of No: When the Democrats Were Conservative,” I want to understand the longer history of an important question that I am often asked, a version of which: “When did the Democratic Party and the Republican Party switch their politics?” I think a study, part biographical of party leaders and part political history of the period, would help to explain the events that preceded this change.