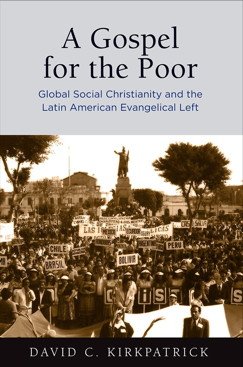 David C. Kirkpatrick is Assistant Professor of Religion at James Madison University.  This interview is based on his new book A Gospel for the Poor: Global Social Christianity and the Latin American Evangelical Left (University of Pennsylvania Press, 2019).

JF: What led you to write A Gospel for the Poor?

DK: Writing this book was an exciting journey that took me to five countries and allowed me to interview fascinating characters around the world. I was especially motivated to bring the voices of marginalized yet deeply influential Christians into established and ongoing conversations. As I started the project, I began to uncover ways in which the influence of Latin Americans had been hidden or excluded, including through translation and adoption by American leaders. As a Spanish speaker myself, I was also motivated to translate Spanish materials for an English-speaking audience and to narrate the ways in which these leaders navigated their bilingual world. At times, progressive Latin American evangelicals used their bilingualism to their advantage, saying one thing in English and another in Spanish. This type of historical recovery motivated me throughout the project. But more importantly, I think their story was worth telling: A Cold War generation of Latin Americans who demanded a place at the table of global evangelical leadership, seeking to strip Christianity of its white, middle-class, American packaging. Within a fraught and contested space, they sought to construct a gospel for the poor.

JF: In 2 sentences, what is the argument of A Gospel for the Poor.

DK: In A Gospel for the Poor, I argue that the intellectual scaffolding of the Evangelical Left was built not in the American public square but in Cold War Latin America. In this context, transnational conversations provoked the rise of progressive evangelical politics, the explosion of Christian humanitarian organizations, and the infusion of social justice into the very mission of evangelicals around the world and across a broad spectrum of denominations.

JF: Why do we need to read A Gospel for the Poor?

DK: A Gospel for the Poorfuses the worlds of Pope Francis and Billy Graham. Many of the main characters in the book are familiar to readers—Graham, John Stott, Carl F. H. Henry, Stacey Woods (founder of InterVarsity-USA), Gustavo Gutiérrez, and others. This story not only recasts well-known Christian leaders but also argues for the importance and inclusion of lesser-known activists such as René Padilla, Orlando Costas, and Samuel Escobar. In order to do so, I utilized a far-flung set of archival materials mostly outside the United States—dusty boxes in René Padilla’s Buenos Aires garage, binders in Samuel Escobar’s apartment in Valencia, Spain, John Stott’s travel diary at Lambeth Palace library in London, long-thought-lost meeting minutes from Seminario Bíblico in San José, Costa Rica, papers of the International Fellowship of Evangelical Students in Oxford, and, of course, the collections at Wheaton College to name a few. Alongside bilingual interviews, this subaltern dataset flavors the narrative and reframes key events and leaders.

A Gospel for the Poor seeks to answer key questions about progressive Christianity such as, why did many evangelicals in the North greet these ideas as family rather than foein contrast to their reaction to the so-called Social Gospel of the late nineteenth and early twentieth centuries? Thus, we turn not to centers of power but to a revolutionary Latin American university environment, examining a cluster of political and social forces reshaping the post-war Americas:  rural-urban migration flows, the resulting complications of urbanization, and the rapid expansion of the universities, where Marxist ideas of revolutionary change presented a growing appeal to students around the world. In turn, this produced a renaissance of social Christianities in the U.S. and buttressed an increasingly interventionist evangelical foreign policy, as well.

For the Evangelical Left, they required theological justification for their political action and when searching for words to describe a gospel for the poor, key members turned to the Global South and language that was forged within the Cold War. In the words of Emerging Church leader Brian McLaren, the Latin American Evangelical Left provided a “different theological ecosystem.”

Ultimately, A Gospel for the Poor contributes to an exciting ongoing conversation on evangelical internationalism and social Christianity. In this story, progressive Latin Americans became trailblazers, playing the role of controversial truthtellers and prophets, bringing to bear the reality of the Majority World into the consciousness of powerbrokers in the North. The role of progressive Latin Americans as a bridge between younger, emerging evangelical leadership in the Global South and the evangelical establishment was crucial to the task of challenging loyalties. In fact, it is fair to say that one cannot understand the contextual turn of global evangelicalism in the postwar period without understanding their role within it.

JF: When and why did you decide to become a historian?

DK: My path to becoming an historian of World Christianity was rather circuitous. I have long been fascinated by the relationship between the United States and Latin America, with all their crucial intersections whether migration, religion, or politics. In college, I studied Spanish and lived in Oaxaca, Mexico, between my sophomore and junior years. Through many journeys prior and since, I fell in love with Latin American culture and history. In conversations and research, the shadow of the United States was ever-present. In grad school, I fell in love with archival research and interviewing—a love relationship that still motivates my work. But perhaps more than anything, two mentors shaped my journey as an historian—Doug Sweeney at TEDS and Brian Stanley at Edinburgh. They took me under their wing and, through hundreds of hours of mentorship, taught me how to think, research, and write. To me, they are also tremendous examples of Christian voices in our contentious contemporary world. I wouldn’t be where I am today without them.

DK: I have two current book projects that are well under way, both surrounding the issue of global religious violence. I am co-editing a collection of essays with Jason Bruner provisionally titled A Global Vision of Violence: Persecution, Media, and Martyrdom in World Christianity. We have a tremendous lineup of scholars with diverse perspectives. My second monograph is titled Blood and Borders: Violence and the Origins of the “Global War on Christians.” Blood and Borders situates American evangelicalism within in a transnational frame and foreground religious violence against Protestants in Latin America. It provides a fresh take on how American evangelicals view themselves, their neighbors, and their place in the world—a world that declared war on their perceived global family.