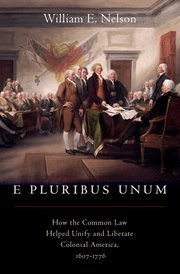 JF: What led you to write E Pluribus Unum?

WN: I decided to write a multi-volume history of colonial American law, of which E Pluribus Unum is a one-volume summary, because I knew that a massive amount of colonial courts records existed, that someone should study them, and that NYU Law School would support my study. Courts were the primary instrumentality of colonial government, and I believe the most important job of historians is to explain how government has worked in the past so that the people can better appreciate how to make it work for them in the present.

JF: In 2 sentences, what is the argument of E Pluribus Unum?

WN: The book traces how the early colonies had a variety of legal systems and how King Charles II and King James II for lack of other means decided to use lawyers and the common law to bring unity and effective governance to their colonies. For half a century, lawyers governed effectively on behalf of the Crown, but beginning with the Zenger case in 1735 and continuing in a series of cases thereafter, lawyers assumed an increasingly oppositional role, with the result that by the 1770s they were the leaders of the Revolutionary movement.

JF: Why do we need to read E Pluribus Unum?

WN: One reason to read the book is to understand the importance of law and local power in the DNA of the American nation; the nation still does not have bureaucratic national institutions that are capable of governing without the help of law and local power. The book also reports on significant details, such as the origins of judicial review of legislation during the Stamp Act controversy and the role of debt collection in the breakup of slave families and communities.

WN: In my last year of college, I couldn’t decide whether I wanted to practice law or become a history professor. The minute I arrived at law school, it became clear that the right path for me would be to become a law professor whose scholarly focus was on history.

WN: My next book is a comparative study of New York and Texas law in the 20th century, with a goal of striving to better understand what differentiates conservatives in places like Texas from liberals in places like New York.