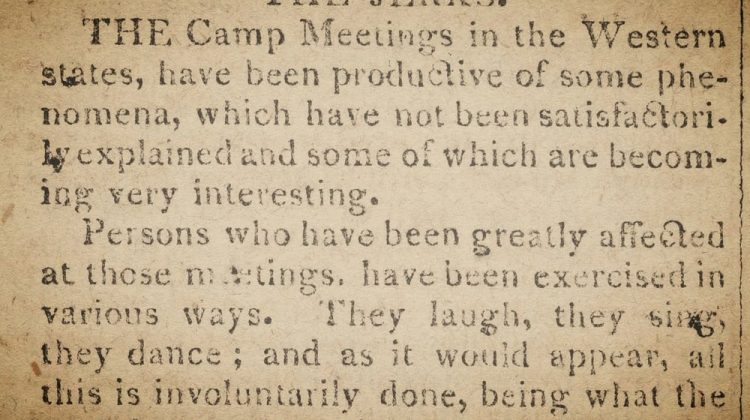 Doug Winiarski, the Bancroft Prize-winning historian and author of Darkness Falls on the Land of Light: Experiencing Religious Awakenings in Eighteenth-Century New England, teaches the jerks.

He explains at the Uncommon Sense: The Blog:

Most of these texts eventually found their way into my January 2019 WMQ essay, “Seized by the Jerks: Shakers, Spirit Possession, and the Great Revival.” But when the project was finished, I felt as if there was more to be said, more to be researched. My students agreed. At one point while working on “Seized by the Jerks,” I taught the Great Revival in a first-year seminar at the University of Richmond. I provided the class with excerpts from Youngs’s journal andedited transcriptions of important manuscript descriptions of the jerks; they pored over Early American Newspapers, Early American Imprints, the American Periodical Series, and other print sources looking for published accounts. The results were astonishing. Students uncovered dozens of new reports of the jerks, some dating from the years of the American Civil War. Over the course of the nineteenth century, no revival phenomena elicited more commentary—positive or (mostly) negative. Today, the strange convulsive fits are remembered as a curiosity, a backwater eddy in the main current of American Protestantism, the road not taken in the development of the southern Bible belt. But a century ago, the jerks and other bodily exercises dominated conversations about the Great Revival.

If my students’ fascination with the jerks is any indication, historians of religion in early America might benefit from spending a little more time in this peculiar world of twitching bodies, signs and wonders, and continuing revelation. Focusing on the jerks reorients our understanding of the Great Revival away from older debates over the decline of Calvinism and toward what really mattered to its participants: the miraculous work of the Holy Spirit in taking direct possession of lay men and women during the process of conversion. It’s an ideal laboratory for exploring popular religion, religious practice, and the history of the body.

Recently, I’ve been working with digital humanities colleagues at the University of Richmond to create a digital sandbox for students and scholars. “History of the Jerks: Bodily Exercises and the Great Revival (1803–1967)” contains more than 200 tagged, searchable primary texts and images. The digital archive includes excerpts from published accounts of the jerks by familiar figures, such as Peter Cartwright and Barton W. Stone, alongside rare manuscript letters and journals, newspaper articles, sermons, medical treatises, and autobiographies. Visitors can explore the items chronologically or browse by author, religious denomination, genre, type of bodily exercise, state, or territory. The site features an introductory StoryMap based on “Seized by the Jerks,” an interactive map, seminar discussion questions, and a bibliography of secondary literature.