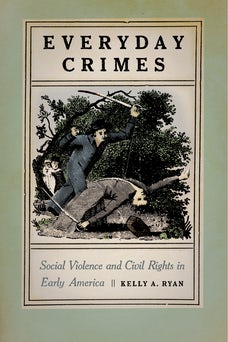 Kelly A. Ryan is Dean of the School of Social Sciences and Professor of History at Indiana University-Southeast.  This interview is based on her new book Everyday Crimes: Social Violence and Civil Rights in Early America (New York University Press, 2019).

JF: What led you to write Everyday Crimes?

KR: When I was researching my first book, I ran across records of abused wives in the revolutionary era and early republic who had the courage to report their husbands to a local justice of the peace. I was surprised by the activism of these women as we know that reporting abuse often leads to greater violence. I wondered about the resistance of slaves and servants –  two other groups categorized as legal dependents – and whether or not they had more or less success in stymying the violence of their masters. Focusing on these groups and newly freed African Americans from the colonial era through the early republic allowed me to get a glimpse of whose voices were privileged and the many ways that legally and socially subordinated individuals fought for their human and civil rights in a society that did not value them as highly as their social superiors.

JF: In 2 sentences, what is the argument of Everyday Crimes?

KR: Everyday Crimes argues that the resistance of wives, servants, slaves, and free African Americans to violence expanded their human and civil rights.  Although it was dangerous to contest assaults, legal and social dependents obtained greater access to legal rights to sue and offer testimony, expanded divorce and separation options, saw alterations in slave codes, and the emergence of emancipation statutes.

JF: Why do we need to read Everyday Crimes?

KR: In the past few years, our society has grappled with whose voices are privileged in cases of assault and murder. Everyday Crimes shares stories of the victims of violence and the ways our legal and social system indemnified some prosecutors of violence from condemnation. It’s important for Americans to understand how our history is a legacy that continues in the modern era, even as African Americans, women, and children have access to civil rights. We must keep searching for ways to better protect Americans and prevent violence.


JF: When and why did you decide to become an American historian?

KR: Like most historians, my interest in history stems from amazing teachers in high school and college. Maryknoll High School in Honolulu, Hawaii had passionate instructors of United States, European, and Asian history who taught history as a way of understanding our modern world. I was interested in a great number of things when I arrived at George Mason University in Fairfax, Virginia as a first year student, but the history professors there, most importantly Lawrence Levine and Howard Smead, made history relevant to everyday life and taught with such great joy. It was infectious. Moreover, I felt that history allowed me to continue focusing on my love of art, anthropology, and literature because all are sources of inspiration and research for historians.

KR: After 15 year of being a professional historian, I have so many stories connected to sexuality and violence in early America that I have not been able to tell as part of my previous scholarship.  I’d like to bring more of a biographical focus to the men and women who have encountered our criminal justice system. I’m really interested in sharing some of the information I’ve gathered about how early constables and police have been victims of and prosecutors of violence. I also have two forthcoming chapters in planned series edited by other scholars in the Routledge History of American Sexuality and the Cambridge History of the American Revolution.