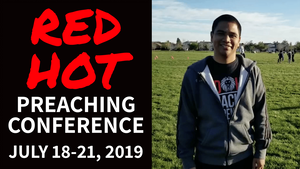 When Hailey Branson-Potts, a prize-winning reporter from the Los Angeles Times, called me to get some historical context before she attended the “Red Hot Preaching” conference in Sacramento, I told her that she was going to stick out like a sore thumb.  She politely disagreed and told me that she grew up in Oklahoma around some pretty serious evangelical and fundamentalist Christians.  She was ready.

Indeed she was ready.  Check out her story on this LGBTQ-hating fundamentalist group.

Here in the capital of the state that is the vanguard for the so-called liberal resistance, parishioners gathered last month for the Red Hot Preaching Conference, featuring some of the most virulently anti-gay pastors in the country. Jimenez started the conference in 2016 after gaining national notoriety for praising the mass shooting of 49 people at a gay nightclub in Orlando, Fla.

The conference’s seven preachers are part of a network of about 30 churches called the New Independent Fundamental Baptist Movement, which, experts on hate and extremism say, is growing and spreading violent rhetoric over the internet in an era when hate crimes against LGBTQ people are increasing.

The conference took place in Jimenez’s storefront church six miles from the state Capitol. Several pastors, including Jimenez, had called for the U.S. government to start executing LGBTQ people.

I am glad some of our conversation proved helpful:

The New IFB Movement is a 21st century offshoot of the Independent Fundamental Baptist movement, which emerged in the 1940s as a response to growing liberalism in large American denominations, said John Fea, a professor of American history at Messiah College in Pennsylvania who has studied fundamentalism.

“They’re tiny, but they’re loud,” Fea said. “They like to yell; they call it hard preaching. They’re not afraid of hell. It’s fear mongering, but they don’t see it that way. They see it as, they’re the only true believers and everyone else has compromised their faith.”