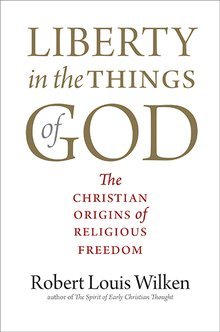 Robert Wilken‘s new book Liberty in Things of God: The Christian Origins of Religious Freedom makes the case that religious liberty has Christian roots that date back to the second century.  Tal Howard reviews Wilken’s new book at The Anxious Bench blog.

Wilken seeks to reorient our understanding of the history of religious freedom. Today, many educated people believe that once upon a time history teemed with inquisitions, witch trials, and religious wars until, lo, the eighteenth-century Enlightenment arrived, paving the way for the American and French Revolutions and with them the constitutional protection of religious liberty. In this narrative, religious freedom is a relatively recent and secular achievement.

But the actual origins of religious freedom are far more complex and specifically indebted to Christian theology, according to Wilken. His argument proceeds in four stages.

First, the spread of Christianity in the classical world redefined religious belief. In the Roman Empire, religious devotion was tethered to the state and manifested itself in outward acts of piety. It was not an inward matter of conviction and conscience. Christians were thus sometimes charged with “atheism” and persecuted for failing to perform the customary rituals. Roman harassment inspired Tertullian and other early Christians writers, notably Lactantius and Origen of Alexandria, to insist that true religion resided in “conscience” apart from Caesar’s domain. Tertullian in fact first coined the term “religious freedom” (libertas religionis) and saw it as a “human right” (humanum ius). “Religion cannot be imposed by force,” echoed Lactantius against his Roman critics.