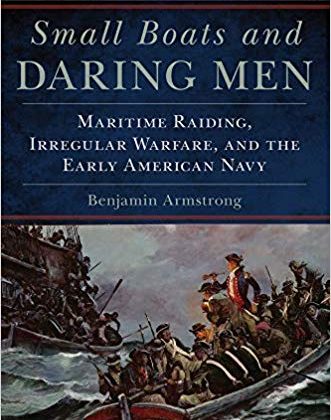 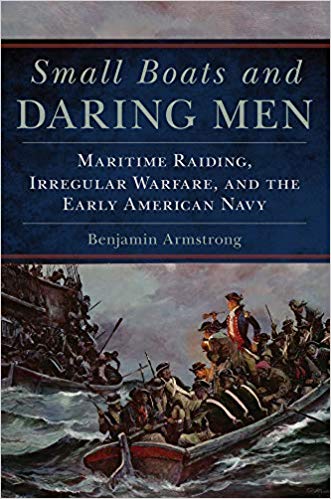 Benjamin “BJ” Armstrong is Assistant Professor of War Studies and Naval History at the U.S. Naval Academy. This interview is based on his new book Small Boats and Daring Men: Maritime Raiding, Irregular Warfare, and the Early American Navy (University of Oklahoma Press, 2019)

JF: What led you to write Small Boats and Daring Men?

BA: As a naval aviator for sixteen years I flew helicopter missions and worked with Sailors on our amphibious ships, Marines, SEALs, allied navies, agents from the Drug Enforcement Administration, international police units, and the rest of the U.S. armed forces on missions ranging from counter-piracy to anti-terrorism and counterinsurgency, and anti-smuggling and maritime law enforcement. At its most basic level I entered my academic research wanting to understand the contemporary missions I was involved with as a naval officer, and what their historical antecedents were. Along the way it also led me to questions of strategic theory, the U.S. Navy’s culture and self-image and its legacy of focusing on blue waters and battle fleets, and how our naval and maritime history fits in as a part of Early American history.

JF: In 2 sentences, what is the argument of Small Boats and Daring Men?

BA: Rather than a secondary and lesser element of how the U.S. Navy and Marine Corps did their jobs in the era of the Early Republic, maritime raiding and irregular warfare were fundamental components of how they operated in both wartime and during peace. This suggests that the strategic concept of guerre de razzia, or war by raiding, was an important “third way” in naval warfare in the early 19th century, and may still be important for naval strategy today.

JF: Why do we need to read Small Boats and Daring Men?

BA: For those interested in the history of the Early Republic, Small Boats and Daring Men offers a view of the era’s maritime and naval history that looks beyond the big battles and oceanic missions where we tend to focus our attention. Instead it shows the less studied history of operations in the muddy waters of coasts and rivers, and does so with what Dr. Kori Schake from the International Institute of Strategic Studies (IISS) called some “swashbuckling” great stories. For those who are more focused on our contemporary maritime world, and what some leaders have termed the return of Great Power competition, Small Boats and Daring Men offers a view of how navies participate in conflict and competition outside the traditional view of big “decisive” sea battles.

BA: My interest in history was initially sparked by my high school teacher Joe Thomas at West Morris Central High School in New Jersey. His classes forced me to begin to think in a wider context, and frankly to learn to start writing better. Knowing that I aspired to attend the Naval Academy, he was also the first person to hand me a copy of The Influence of Seapower Upon History and assign me to read it. (Mahan went way over my head as a high schooler!) But I don’t know that I can pinpoint a moment when I decided to “become” a historian. It just sort of happened as an interest and a personal pursuit while I continued to rise through the ranks as a navy helicopter pilot. After tackling each challenge (writing my first article on the history of the squadron I was serving with, studying for a Master’s degree, working on scholarship for peer-review, thinking about pursuing a PhD), the next one just presented itself naturally until one day, here I am with my own book of Early American history on my shelf.

BA: Last year I had the privilege of serving on the staff that supported the Secretary of the Navy’s Education for Seapower review study. Over a 7 month long effort, we completed an in-depth study of how and why we educate the sailors, marines, and officers in the Navy and Marine Corps. This involved looking at everything from the different schools like the Naval Academy and Naval War College, to the personnel policies involved, to the budget priorities and cultural values and views of education. It was fascinating work and over the next year it will be interesting to see what kind of reforms begin to improve what the services do and how they prioritize education. In parallel with that work I received a fellowship in the USNA Humanities and Social Sciences Division, sponsored by Ernst Volgenau (USNA ‘55) via the Naval Academy Foundation, to study the pedagogy of sea power. I’m looking at sea power historians and theorists like Alfred Thayer Mahan and Julian Corbett and examining their teaching methods and how they engaged with the public and with teaching, beyond the research and writing of their famous books.