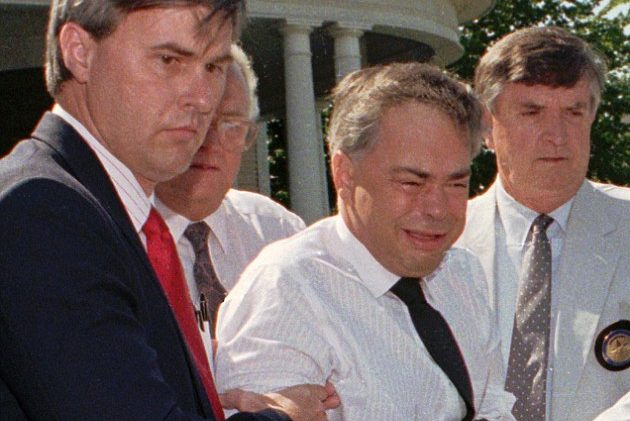 …on March 19, 1987, Jim Bakker resigned in disgrace from PTL after his December 1980 sexual encounter with Jessica Hahn in a Florida hotel room became public.  Hahn described Bakker forcing himself on her in an article in Playboy, while he claimed that she was a professional who knew “all the tricks of the trade.”  In the wake of the Hahn revelation, stories appeared about Bakker’s invovlement in gay relationships and visits with prostitutes, sometimes wearing a blond wig as a disguise….

The 1987 scandal was initially about sex, but it soon turned to money after it was discovered that PTL had paid Hahn and her representatives $265,000 in hush money.  When he resigned, Bakker turned the ministry over to fundamentalist preacher Jerry Falwell.  He and his team quickly discovered that PTL was $65 million in debt and bleeding money at a rate of $2 million a month.  That summer workers boarded up the unfinished Towers Hotel, which never opened.  Falwell and his entire staff left PTL in October 1987, less than seven months after he took charge of the ministry.  When he took over, Falwell praised PTL as “one of the major miracle ministries of this century.  I doubt there’s ever been anything like it in the 2,000-year history of the church.”  When he left he declared that Bakker had turned PTL into a “scab and cancer on the fate of Christianity,” a disaster unparalleled in the last 2,000 years.  By then PTL was already in bankruptcy, headed for liquidation.

Two years later, in 1989, Bakker went on trial for wire and mail fraud, accused of overselling “lifetime partnerships” to Heritage USA and misusing the money donated for its construction.  The trial unfolded in a circus-like atmosphere before US District Judge Robert “Maximum Bob” Potter.  A witness collapsed on the stand and Bakker himself had a psychological breakdown, crawling under his lawyer’s couch as federal marshals  came to get him.  He was convicted and initially sentenced to forty-five years in prison, serving nearly five years before his release.  For millions who watched the scandal unfold in the press and on television, PTL and the Bakkers became a national symbol of the excesses of the 1980s and the greed of televangelists in particular.

As many of you know, Jim Bakker is now out of prison and has his own cable television show.  We have covered him here.  Apparently, Bakker now has a different story about why he was convicted and sent to jail, and it has nothing to do with fraud.  Watch:

Jim Bakker claims that the government put him in prison because they were afraid that he was going to endorse Pat Robertson and make him president. pic.twitter.com/lXgNThXLH2