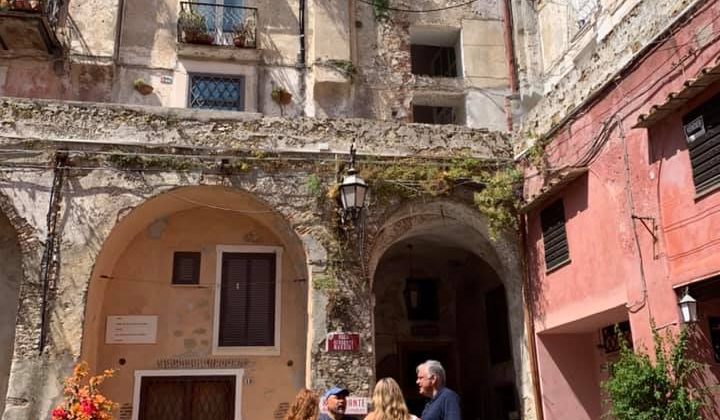 Last week I visited, for the first time, the place where my paternal grandfather was born.  San Felice-Circeo is an Italian village (comune) on the Mediterranean (Tyrrhenian) Sea about 100 km south of Rome.  In the 1930s Mussolini claimed large portions of the San Felice-Circeo shoreline and created a massive national park, the largest in Italy.  The centro storica (historic center) dates back to the Roman era and during the Middle Ages the Templars were in possession of the town.  San Felice-Circeo sits upon a hill overlooking the sea and many of its medieval features, including some of the old city walls, are still in place.

My grandfather–Giovanni Fia (sic)–was born in 1910.  A few months earlier his father, Andrea (Andrew) Fia, left San Felice-Circeo to join his half-brother in the United States, leaving his young wife Ermelinda (DiProspero) Fia and his daughter Angelina back in the village.  Like many Italian immigrants, Andrea was going to find a job and establish himself in America before he sent for his family.  Ermelinda was in good hands.  The DiProspero family was large and established in San Felice-Circeo.

(Andrea, I might add, was not from San Felice-Circeo.  He was a sheep-herder from the mountain town of Collepardo who often brought his sheep to San Felice-Circeo’s warmer climates in the winter.  He spent these winters living in a cave by the sea.  This was not uncommon.  Apparently people lived in caves in this region well into the 20th century).

What Andrea did not know when he left Italy was that Ermelinda was pregnant with twins.  Giovanni and Sisto Fia were born in the San Felice-Circeo convent.  Though the DiProspero lived literally next door to the convent, the nuns had the best medical facilities in town.  The convent served as a local hospital.  Three years later, Ermelinda and the children were reunited at Ellis Island and eventually settled in West Orange, New Jersey.  Three more children would come.

On June 19, 2019, my family met up with my father’s first cousin Jerry and his wife Jean for a tour of the old town.  Jerry lives in Connecticut, but he has been coming to San Felice-Circeo for three decades.  We all consider him to be the family historian.  His mother Anna (soon to turn 100) was my grandfather’s youngest sibling.  (My grandfather passed away in 2014 at the age of 103).  As it turns out, Jerry and Jean were in the final days of a one-month vacation in the San Felice-Circeo.  The timing could not have been any better.

Jerry schooled us in family history as we walked through the town.  He showed us (from the outside) the apartment where my grandfather was born, took us to the site of the church where he was baptized (and where Andrea and Ermelinda were married) and bought us an incredible lunch at a local restaurant located outside what was once the convent.

I am not much a traveler, and it often takes time for me to adjust to new surroundings, but San Felice-Circeo felt like home.  The proprietors of the restaurant were eager to hear our story.  They opened the dining area early for us and even gifted us with a tiramisu and pear torta. Another woman we met, who splits her residency between San Felice-Circeo and San Diego, California, bought us coffee.  We received a warm welcome.

A visit to San Felice-Circeo has been on my bucket list for a long time.  And while I am still processing the visit, I know that I have been somehow changed by it.  The experience of visiting this ancient village by the sea with my family, and with my cousin as a guide, was deeply emotional for me.

I can say one thing for sure. The visit to San Felice-Circeo brought me face to face with the power of the past.  It is one thing to lecture and write about historical continuity and contingency in relationship to the events described in a history textbook or interpreted at a historical site, but it is quite another thing to reflect on the connections with the past, and the human choices made by people in the past, when it has a direct impact on your own identity.

As I looked-up at the window where my grandfather was born and walked the grounds that my ancestors walked, I was acutely aware that I was part of a human story–a family story–that transcended my present moment.  My life, while certainly defined by the choices I have made and the paths I have chosen to follow, has also been shaped by the choices of others who lived in a particular place in a particular set of social, economic, and cultural circumstances that I have had no way of controlling.

And I am humbled by it all.