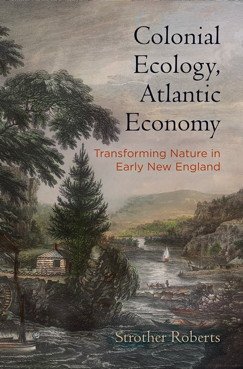 Strother Roberts is Assistant Professor of History at Bowdoin College in Brunswick, Maine. This interview is based on his book Colonial Ecology, Atlantic Economy: Transforming Nature in Early New England (University of Pennsylvania Press, 2019)

JF: What led you to write Colonial Ecology, Atlantic Economy?

SR: As an undergrad I double-majored in economics along with history. The melding of these two disciplines has influenced my research over the years and, in particular, helped spark my interest in environmental history as a sub-field. Economics, at its heart, considers how societies allocate scarce resources. Environmental history similarly studies how past human societies have grappled with the challenges of scarce natural resources, but within the social, cultural, and historical context that is all too often absent from purely economic models. Economics also has a very explicit focus on the power of trade. A number of excellent scholars before me have written about the environmental history of New England, but I often found their work too insular. In the United States today we are used to thinking of ourselves as living in a globalized world. We are less likely to appreciate the fact that the indigenous and European inhabitants of seventeenth- and eighteenth-century America were also experiencing the influences of relatively rapid globalization. I wrote Colonial Ecology, Atlantic Economy to tie the ecological changes that settler societies introduced into New England to the transatlantic commercial and political forces that drove them.

JF: In 2 sentences, what is the argument of Colonial Ecology, Atlantic Economy?

SR: Colonial New England was an integral part of England/Britain’s imperial commercial empire and everyone from imperial planners to its earliest settlers fully expected colonization to contribute exports to the imperial economy and the larger Atlantic World of which it was a part. Colonists and indigenous communities responded to the incentives offered by transatlantic markets to selectively extract resources from the region’s environment and in the process transformed New England’s physical and political landscape to the point that, by 1790, both would have been unrecognizable to an observer living two centuries earlier.

JF: Why do we need to read Colonial Ecology, Atlantic Economy?

SR: The book takes a number of disparate threads from the contemporary historiography of early America and weaves them together into a coherent pattern – while also introducing significant new insights along the way. As I mentioned in my response to your first question, other scholars have done excellent research on the environmental history of New England, but the most influential studies are from the 1980s (and are becoming a bit dated) while even more recent works have tended to be rather insular in their focus. By contrast, most of the rest of the field of early American history stresses the interconnectedness of “the Atlantic World” or self-consciously situates the individual colonies or regions within a #VastEarlyAmerica. One manifestation of this trend has been the proliferation of so-called commodity histories, histories that trace the life of individual commodities from their site of production – usually in the colonies of America – through their processing and marketing, and eventually into the hands of their final owners – usually in Europe or colonial urban centers. Colonial Ecology, Atlantic Economy combines this new interest in commodity exchange networks and weds it to older discussions of environmental change, to show how the colonial ecology of New England was inextricably tied to the broader transatlantic economy beyond its shores.

The book also cuts through the decades-old argument over whether New England’s economic development was driven by domestic production and demand or by trade with Europe and other colonial regions. A similar argument over whether the consumer revolution and industrial revolution were the result of domestic economic forces or whether they were driven by overseas colonialism has long plagued British history. The best histories, in my opinion, recognize that these are false dichotomies. For instance, the New England farmer who felled an oak to make barrel staves and then sold them to a local merchant likely did not know or care whether those staves were ultimately fated to hold locally-milled flour that would never leave his township, or whether they would be traded to the West Indies to hold slave-grown sugar on a sea-voyage to London. Settlers, from the very first colonists up to the citizens of the early Republic, fully expected to participate in an interconnected system of local, regional, and transatlantic markets. The indigenous inhabitants of New England, too, contributed commodities to these markets, either as the eager consumers of novel European goods and weapons or, increasingly in later decades, as a result of the violent and/or legal coercion exercised by the region’s increasingly hegemonic Anglo-American society. Much of this participation in colonial and Atlantic markets, at whatever level, necessarily rested on the extraction of resources from the regional environment, and each act of extraction had a physical impact on that environment.

Previous environmental histories of New England have failed to appreciate just how profound these physical changes were, or how early they began. In fact, I even surprised myself with some of what I discovered. Take the fur trade, for instance. Gripped by the “Little Ice Age” and facing the depletion of furbearer populations in Europe and eastern Asia, European consumers purchased a tremendous number of furs – most notably beaver pelts – from North America over the course of the early modern period. Native American hunters in New England gladly embraced the trade as a source of European tools, weapons, and cloth, sacrificing tens-of-thousands of beaver for use in European cold-weather fashion. The result was the extirpation of beaver from much of New England by the 1670s and the drainage of hundreds-of-thousands of ponds and wetlands – formerly maintained by beaver dams – by the turn of the seventeenth century. While other scholars have argued that significant ecological change did not come to New England until the supposed advent of commercial farming at the turn of the nineteenth century, my work shows that New Englanders were always commercially-oriented and that profound change began much earlier. In fact, my work on the fur trade suggests large swathes of the New England landscape had been profoundly altered by transatlantic trade before any European ever laid eyes on  its “natural” (or, at least, pre-European encounter) state.

SR: That depends on what you mean by “American” historian – my Master’s thesis and my early work in my PhD program focused on First Nations history in Canada. But as I began to consider possible dissertation topics, my PhD advisor pragmatically suggested that a more southerly focus would serve me better with publishers and on the U.S. job market. Since I was most interested in the processes of North American history – the meeting and clashing of indigenous and settler societies and the subsequent formation of new systems and economies that came out of those transatlantic encounters – I shifted my attention to the source-rich and historiographically-storied archives of New England. Both Colonial Ecology, Atlantic Ecology and my next project are defined, at least partially, by the geography of New England (and specifically by the Connecticut River Valley in the case of Colonial Ecology). At the same time, though, I have never wanted to be limited by this geography, which is why the book focuses so much attention on how connections to different parts of North America (and Europe) influenced New England’s environmental history.

SR: My next book project is an environmental and social history of dogs in the indigenous and Euro-American societies of early New England and New France – which means I get a chance to return to Canadian history. The Cliff’s Notes version so far  is that dogs were essential to indigenous economies as hunting partners and sources of meat, that English settlers intentionally persecuted indigenous dogs as a way to weaken Native American societies to the degree that they were extirpated and replaced by dogs of European descent, that European settlers also relied on dogs for economic purposes and as weapons of war, and that the ecological success of introduced dogs eventually led Euro-American societies to implement policies to control their populations. Today, dogs are the most populous large, non-human, omnivorous predator in the world. Now, that last sentence contains a lot of qualifiers, but it essentially means that once you start looking at things bigger that bugs, rats, and chickens – it’s just dogs and us as the most numerous meat-eaters out there. This was certainly true of the indigenous dogs that inhabited the northeast prior to 1600.  A conservative estimate would suggest that the region was home to at least twice as many dogs as it was wild wolves, while some sources suggest that this ratio would have been far higher. Early English records suggest that introduced colonial dogs were just as numerous as their indigenous cousins were. And yet, I can’t think of a single environmental history that seriously considers the effect that dogs had on the natural environment prior to the nineteenth century. And even those tend to focus on urban environments. Dogs were humanity’s first domesticated partners and the only form of livestock kept by New England’s Indians. They played important roles in the economies and societies on both sides of the European conquest of New England, and, in an important cultural sense, helped define how all of the cultures involved understood what it meant to be human. It is, in my opinion, high time that someone wrote a dogs’ history of early America.