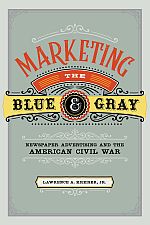 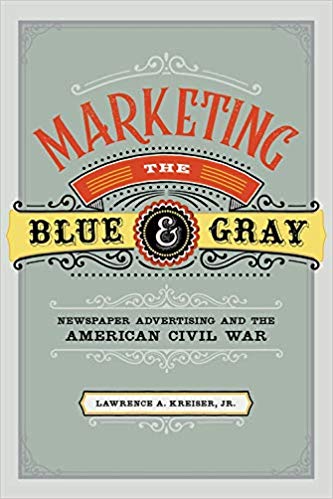 Lawrence Kreiser is Associate Professor of History at Stillman College in Tuscaloosa, Alabama. This interview is based on his book Marketing the Blue and Gray: Newspaper Advertising and the American Civil War (LSU Press, 2019).

JF: What led you to write Marketing the Blue and Gray?

LK: A billboard in Alabama proclaiming a nationally distributed soft drink as a “Southern Original,” caused me, indirectly, to write a book on newspaper advertising and the Civil War.  I wondered whether the sign had increased sales in Tuscaloosa, where I teach?  Did it even run on the West Coast, or in the Northeast?  Did I, who grew up in the Midwest, and refer to soda as “pop,” somehow gain identity as a southerner if I purchased a two-liter

Those questions turned into a research project when I realized that one might ask similar questions about advertising and the Civil War.  Although historians make use of contemporary newspaper headlines and editorials to write many excellent studies on the Union and Confederacy, they all but ignore the advertisements.  Yet, between 1861 and 1865, merchants took advantage of the wide readership of newspapers to pitch everything from war bonds to biographies on military and political leaders, and from patent medicines that promised to cure any battlefield wound to “secession bonnets” and “Fort Sumter” cockades.  My book is the first full-length study on Union and Confederate newspaper advertising, and it’s a project that I thoroughly enjoyed researching and writing.

JF: In 2 sentences, what is the argument of Marketing the Blue and Gray?

LK: The book argues that commercialism and patriotism became increasingly intertwined as Union and Confederate war aims evolved, with Yankees and Rebels believing that buying decisions were an important expression of their civic pride.  The notices also helped to expand American democracy by allowing their diverse readership to participate in almost every aspect of the Civil War, with readers perusing notices for, among others, the capture of deserters, the reunion of former slaves with their families, and the embalming, and transporting home, of family members and friends killed in battle.

JF: Why do we need to read Marketing the Blue and Gray?

LK: Americans continue to debate the role of advertising and society.  Do words and images from clothing companies, restaurants, and political lobbying groups, to name just a few examples, exert too much influence?  My research helps to provide insight into the debate by exploring advertising while still in its early stages.

Still, although we live in a commercialized age, my study avoids using the nineteenth century to anticipate the twenty-first century. There are parallels between sales notices then and now, especially with lofty appeals mixed with low gimmickry; and a better life balanced against greater appetites. But throughout the book, my focus remains on how advertisements provide an understanding of mid-nineteenth-century Americans as a people and a nation modernizing even while they passed through a period of great peril and suffering. To view these notices as an idle curiosity would mean missing a window into how advertisers influenced their readers’ lives and society during the most turbulent domestic event in the nation’s history.

LK: Great question!  The short answer is on the fourth-grade flag football fields, when I realized that I had not one iota of the athletic talent to become the quarterback of the Cleveland Browns, my hometown team!  The more serious answer is that history claimed me.  I have been very fortunate to do what I love—working with great students and colleagues at Stillman College and researching, to my mind, the pivotal moment in American history.  I know that it sounds cliché, but sometimes I can’t believe that I get paid to do what I do.  I hope that all of my students go onto careers where they have such rewarding opportunities and wonderful experiences.

LK: I’m researching the role of newspaper and magazine advertising in national reconciliation during the late nineteenth century.  Almost as soon as the guns had fallen silent in 1865, publishing companies marketed their war-themed histories and memoirs as “objective” and “factual,” even though these works often were highly partisan.  Patent medicine dealers pitched their pills and potions as having saved the lives of almost countless numbers of soldiers, whether they had worn the blue or the gray.

While national advertisers attempted to find a profit in downplaying the results and causes of the war, local merchants pursued a different marketing strategy.  In the former Confederate states, store owners encouraged potential customers to “buy southern” to help the region regain its former economic clout.  In the black-owned press, salesmen encouraged readers to patronize their businesses as a blow for self-sufficiency and, ultimately, civil rights.  Whether in the North or South, veterans formed a new commercial market.  Merchants pitched their material wares and services based on why these men had fought and how they transitioned to peacetime.  The advertising pages offer a treasure trove of primary source materials on the memory and meaning of the Civil War during the Gilded Age.

As a closing note, and veering slightly off topic, thanks, John, for maintaining the “Way of Improvement” blog.  I find it fascinating, and appreciate the time you spend on its upkeep.