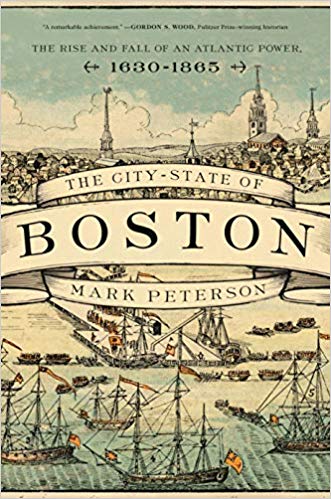 Check out this article on Mark Peterson, author of The City-State of Boston and history professor at Yale.  A taste:

Yale historian Mark Peterson believes that history is best told by abiding by the Golden Rule.

The accurate representation of the past is “a kind of moral science,” says Peterson, the Edmund S. Morgan Professor of History, adding that the age-old adage “do unto others as you would have them do unto you” is as relevant in writing history as it is in our daily behavior.

“Historians should represent their subjects accurately and take their stories and their positions seriously. They were just as human, just as fallible, and just as uncertain of what was going to happen in the future as you and I are, and we owe them the kind of respect that we would want future historian to have towards us,” says Peterson. “This is not to say that we can’t be critical of the actions and beliefs of historical figures, but rather to remember that our capacity to assess the limitations and shortcomings of historical actors can help us to become conscious of our own.”

We frame our sense of identity in part by drawing on the stories we tell about ourselves — each of us has a historically structured sense of identity and purpose, says Peterson, a specialist in early North America and the Atlantic world. “I think the same is true with respect to societies and cultures. There is a kind of social sanity, an ability to operate effectively in the world, that comes from knowing who we are, how we got here, and what kinds of human decisions — or lack thereof — were made that framed the circumstances, the limitations and opportunities, in which we live our lives.”